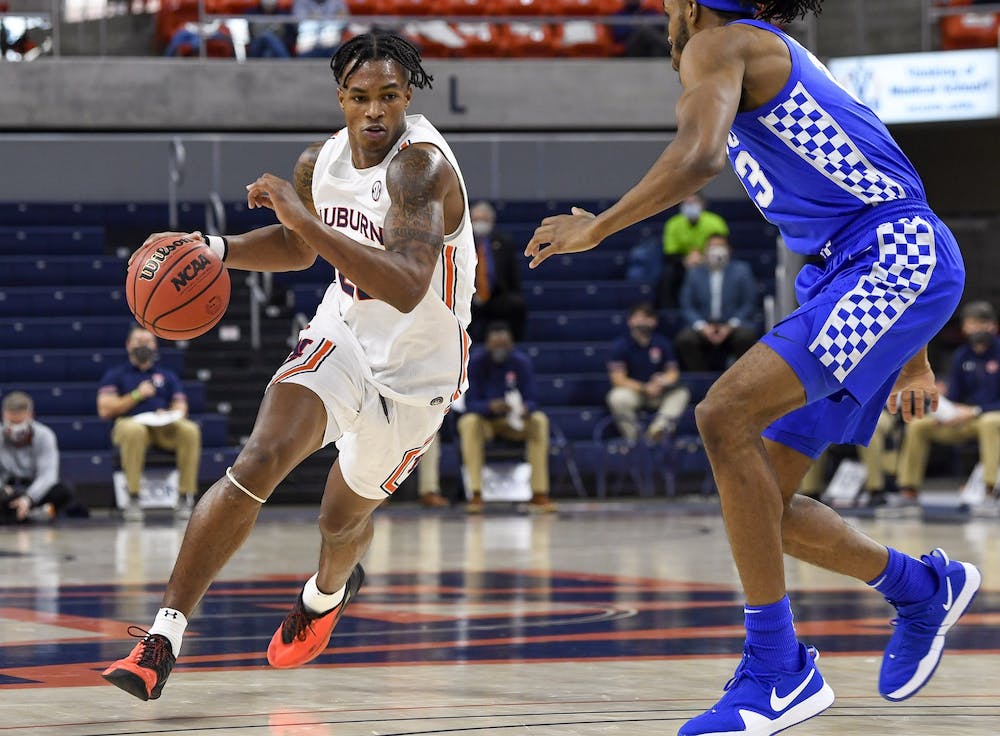 After scoring 90+ in each of their last two games Auburn looked like they might not even hit the 50-point mark after a rough start shooting in the first half.

“Offense was difficult,” Pearl said,  “They know what is coming and so do we.”

Both teams struggled coming out of the gate as Auburn started off 1-10 from the field with Kentucky just 1-8. Auburn Arena was quiet for most of the first half until  Devan Cambridge got a steal and dunked an alley-oop pass from Sharife Cooper to spark some  energy from the Auburn crowd.

When the first half came to a close Auburn was shooting just 24% (8-33) from the field. However,  it was the Tigers’ defense and rebounding that kept them in the game as they held Kentucky to just 33% FG (8-24) in the first half.

Even though they were undersized for most of the game due to foul trouble, Allen Flanigan still thought  “Kentucky’s big guys didn’t have a free night of scoring.”

Flanigan led all players in rebounds, tallying nine. Pearl said that whenever Flanigan crashes the glass, “22 in white is getting it.”

Auburn was able to find their shooting stroke in the second half as they shot over 55% from the field. The score went back and forth between the Tigers and Wildcats for most of the half but it was the final eight minutes of the game that decided the winner.

In those eight minutes, Auburn went on a 15-3 run, held Kentucky scoreless for 3:44 and made six straight shots.

“I knew in order for us to win we had to  attack the basket and finish at the rim and not look towards fouls,” Flanigan said on his mentality going into the second half.

Auburn’s J.T Thor played limited minutes due to foul trouble, but when he came into the game in the final minutes, he forced three turnovers in less than a two minute span.

Auburn was able to close the door on Kentucky with made free throws at the end of the game, improving drastically from their performance in the past few games. They made 15-21 total for the game (71%) and 12-15 in the second half (80%).

Auburn was able to run out the clock after a Kentucky offensive foul and finished the game with a 66-59 win.

After a hot start to his college career, Sharife Cooper could not find his touch against Kentucky.  He shot just 3-13 from the field but his phenomenal court vision and layup with seconds remaining helped the Tigers pull out a much-needed win against Kentucky.

Although Cooper is only 1-11 from three in his first three games Pearl backed up his starting point guard by warning other teams that, “You better guard him there because he can shoot the three ball.”

The 8-6 Auburn Tigers head to Fayetteville, Arkansas for a rematch on Wednesday night against  the 10-4 Razorbacks on SEC Network at 8 p.m. CT. Expect a lot of offense in this game as  Arkansas won the first matchup in Auburn Arena 97-85.