ICYMI: No. 19 Auburn picks up its 30th win at Jacksonville State 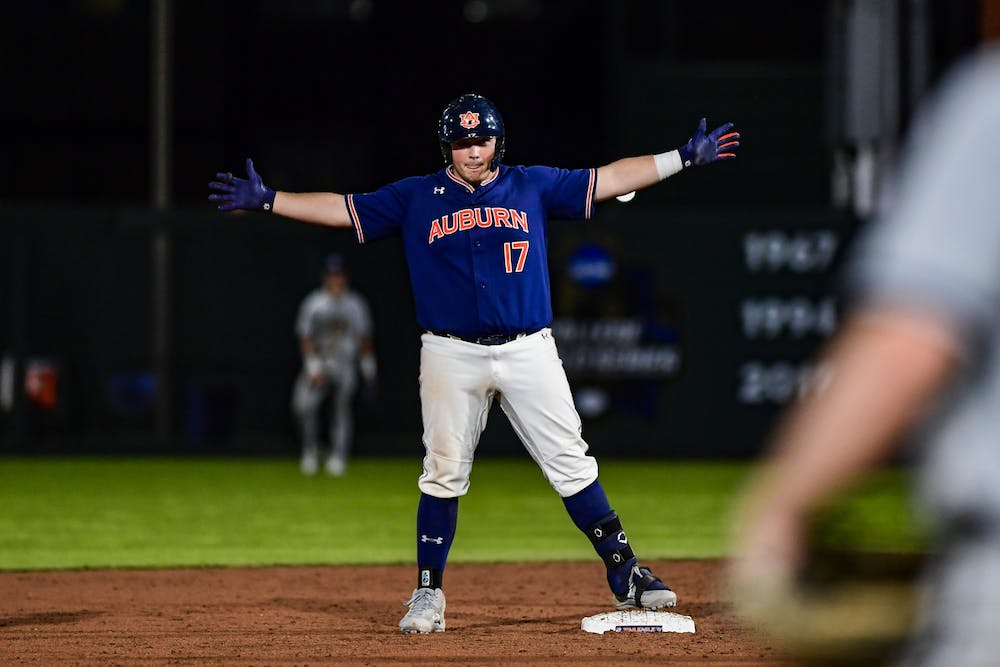 Feb 26, 2022; Auburn, AL, USA; Sonny DiChiara (17) reacts after getting to second during the game between Auburn and Yale at Plainsman Park. Mandatory Credit: Jacob Taylor/AU Athletics

Auburn, Ala. (EETV) - No. 19 Auburn baseball defeated Jacksonville State 8-4 to pick up its 30th win of the season. Tennessee and Arkansas are the only other SEC teams to win at least 30 games.

Mason Barnett pitched the first three innings and allowed one run with five strikeouts. Konner Copeland took over in the fourth inning and recorded four outs in his appearance.

Jacksonville State had two runners on with nobody out before Barnett struck out the final three batters to escape the first inning.

Still scoreless in the third inning, Gamecock TJ Reeves blasts one to deep left center with a runner on second. Kason Howell saw it the entire way and struck his foot into the fence to make the catch.

"I actually worked on it during batting practice with Sonny because he's always hitting bombs and I think I got one off him," Howell said. "I realized I could stick my foot in the fence, and it just played out.”

Auburn used its momentum to get on the board in the next inning. Sonny DiChiara drew a lead off walk and eventually scored on a two-out RBI single from Brody Moore.

The Gamecocks answered immediately with a lead off home run. Copeland entered the inning with two on base and nobody out. He escaped the threat with a sacrifice, groundout and fly out.

Three-hit-by pitches and two walks allowed the Tigers to go up 3-1 with one out in the fifth inning. Bobby Pierce hit an RBI single before Brooks Carlson scored on a wild pitch. Moore drove in the fifth and final run of the inning on a groundout.

Jacksonville State was relentless and cut the lead 6-3 in the bottom of the fifth.

Both teams quieted down and went scoreless in the sixth. Auburn added to its lead when Moore brought two runs in on a RBI single, his third of the game. A sac fly from Nate LaRue scored Cam Hill.

Jacksonville State hit a solo home run in the bottom of the seventh, but Carson Swilling stopped the Gamecocks by striking out all six batters.

"We have a lot of confidence, and we're playing as a team," Howell said. "This is a great feeling heading into Knoxville, knowing we have that confidence.”