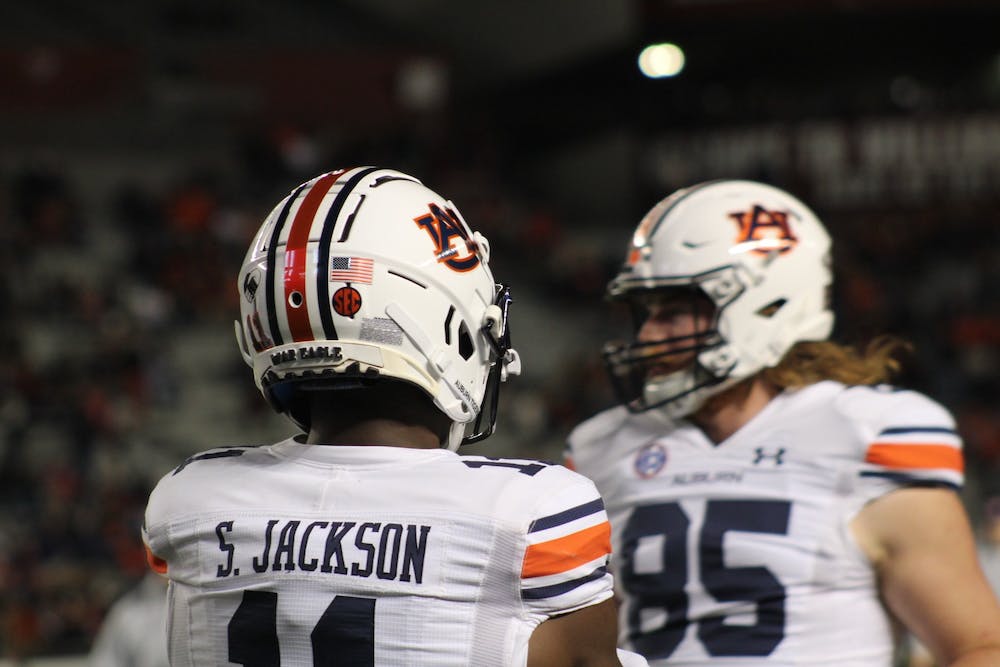 AUBURN, Ala (EETV) - With the end of the 2021 season the college football silly season has begun. With nine players entering their name to the transfer portal and more running out of eligibility and entering the draft, Eagle Eye TV will break down who's staying and who's going.

It's no news that Bo Nix has decided to continue his collegiate career at Oregon. Nix has been the starter in every game at Auburn until his ankle injury against Mississippi State. Nix threw 11 touchdowns and three interceptions in 10 games before suffering a season-ending ankle injury. He added four more touchdowns with his legs.

Shaun Shivers announced that he will be transferring to Indiana on Dec. 12. The Fort Lauderdale native has seen a decrease in touches every year with the Tigers which included just 14 in the 2021 season. This comes after freshman running back Jarquez Hunter passed Shivers in the depth chart.

Kobe Hudson led the Tigers in receptions, yards and touchdowns this past season. The sophomore wide receiver hauled in 44 receptions for 580 yards and four touchdowns. On Monday the wideout took to his Instagram to say that he was no longer with the team. In the caption of his post Hudson wrote “He from the north, I’m from the south, he don’t understand me. [Five] out!” insinuating that there was a disagreement with first-year head coach Bryan Harsin.

Auburn will also lose grad transfer Demetris Robertson, who was the team’s third-leading receiver and exhausted his final year of eligibility this season.

Tight End John Samuel Shenker announced that he will be returning for his sixth year of eligibility. Shenker is coming off the best season of his career, setting the program record for receptions and yards by a tight end, with 33 catches for 413 yards.

There is a lot of uncertainty surrounding the Auburn offensive line going into 2022.

Senior Brodarious Hamm announced on Dec 14. that he would be entering the NFL draft. Hamm only played in four games for the Tigers in 2021 but started at right tackle in nine games in 2020.

Brandon Council has run out of eligibility. The grad transfer played in nine games in two seasons with the Tigers.

Nick Brahms, Austin Troxell and Alec Jackson could all use their COVID-19 year of eligibility and return to Auburn for one more season if they choose. Brahms has started 33 games at center for the Tigers in his career.

Derrick Hall announced on Dec. 30 that he will return to Auburn for his senior season. The junior recorded 52 tackles and nine sacks in 2021 while also forcing two fumbles.

Redshirt sophomore Colby Wooden announced on Dec. 29 that he will return for his redshirt junior season. Wooden was fourth on the team this season in tackles with 61 tackles. The 6-5, 278 pound defensive lineman also added five sacks to his stat line.

T.D Moultry announced Monday that he will be entering his name in the NFL Draft. Moultry recorded a career-high 33 tackles in 2021 and will look to capitalize on the season by entering the draft.

Arguably the biggest win for the Tigers happened on Sunday when Owen Pappoe announced he would be returning for his senior season. The former 5-star recruit and captain only played in fives games in 2021 while dealing with an ankle injury. He finished his injury-shortened season with 23 tackles. Pappoe is the tenth highest recruit in Auburn history and has been a day one starter since his freshman year.

The Tigers will lose Zakoby McClain and Chandler Wooten to the NFL Draft. The pair of linebackers led the Auburn defense in tackles with 96 and 94 respectively.

Auburn will lose star cornerback Roger McCreary, a projected first-round pick. McCreary was named to the AP first team, he also earned All-American status from ESPN, The Athletic and the Senior Bowl.

McCreary is joined by safeties Smoke Monday and Bydarrius Knighten. Monday was known for laying big hits and being a physical presence on the defense.

Graduate transfer from West Virginia, Dreshun Miller, announced on Jan. 5 that he will be transferring from Auburn. Miller was one of the highest rated transfers last season but the Marietta, Ga. did not see much action for the Tigers.

Auburn has signed Alex McPherson the highest-rated kicker in the 2022 class. McPherson's brother, Evan, is the kicker for this seasons AFC North Champion Cincinnati Bengals and teammates with former Auburn Tiger C.J. Uzomah.