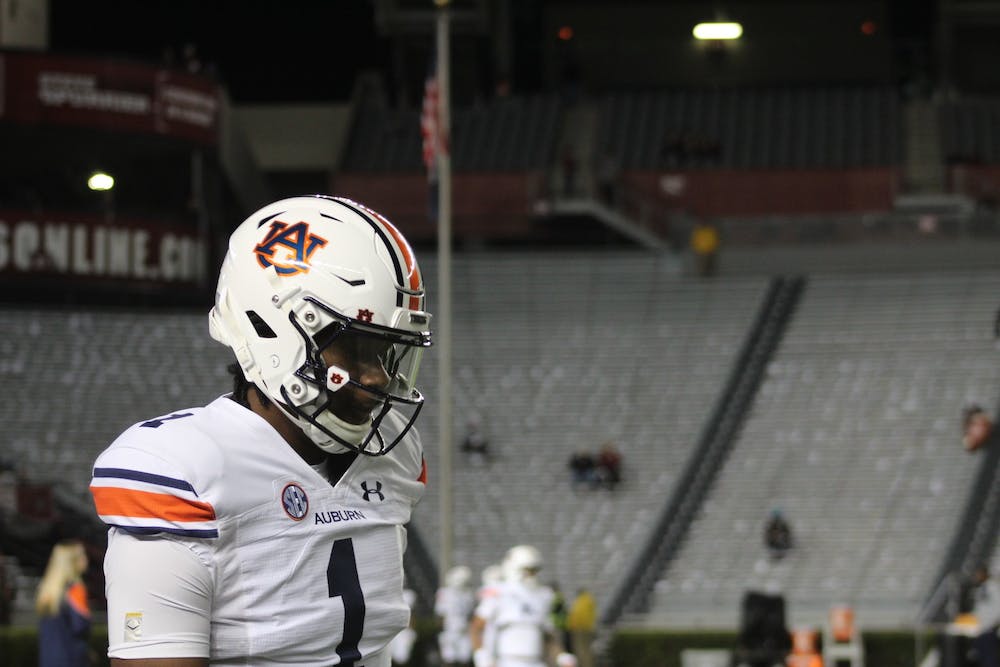 Photo by Jake Gonzalez | Eagle Eye TV
Quarterback T.J. Finely warms up ahead of the matchup vs. South Carolina

COLUMBIA, SOUTH CAROLINA (EETV)- Auburn fans spent the duration of last week mentally preparing for the absence of Bo Nix and Anders Carlson in Saturday’s contest with the University of South Carolina. It’s not unreasonable to believe that there was a large amount of concern surrounding the capability of LSU transfer TJ Finley or in the ability of Auburn’s kicking group to fill the void left behind by Carlson. What Auburn fans were likely not prepared for was the near-gametime realization that the Tigers were missing even more bodies than initially expected and most certainly played no help to Bryan Harsin’s squad in it’s 21-17 loss at the hands of Shane Beamer and the Gamecocks.

With fewer than 20 minutes remaining before kickoff of the week 12 contest, news broke that the Tigers had even more holes to fill; junior linebacker Owen Pappoe, sophomore wideout Kobe Hudson and senior offensive lineman Brandon Council were scratched from competition, forcing the orange and blue to turn to its depth to get the job done in Columbia.

Despite Pappoe’s absence for the sixth time in 2021, the Tiger front seven was still able to keep its opponent at bay for the first quarter of play; the group held the Gamecocks to just 14 in the first half.

The Auburn achilles heel was not its defense in week 12. The team’s ultimate downfall was it’s forgettable display on offense and falling flat in the final 30 minutes of play for the second week in a row.

Harsin made it clear that his offense’s production did not meet the standard which he holds it to.

“I’m always surprised to see 17 points with what we’re trying to get done on offense,” Harsin said. “So, rushing, throwing and all that, 17 points just doesn’t cut it. You’ve got to score points. Hopefully put your team in a position where you make it challenging for the other offense.”

Auburn’s lone bright spot was sophomore running back Tank Bigsby who rushed for 164 yards on 22 attempts, picking up a touchdown with his legs; however, the back’s role was limited in the later portion of the contest, not receiving a single touch on the Tigers’ final drive despite averaging an eye-popping 7.5 yards per attempt.

Bigsby’s head coach commented only on his performance rather than the decision to withhold him from providing his efforts on a potentially game-winning drive.

From an analytical standpoint, Harsin’s claim that his team did not do enough on offense is undeniable. Auburn fans are now longing to know how he plans to avoid this outcome for a third straight week.

According to the first-year head coach, it’s all in preparation and attention to detail.

“Well I mean you get it back together by how you prepare yourself, really every day,” Harsin said. “You want to go out there and finish every little rep you take in practice, everything that you do. You prepare for the situations that we’re in. There’s answers for what happened to us tonight.”

Harsin notes that he holds himself accountable for making sure his squad is ready and buys into his system on a weekly basis, something he claims has yet to happen routinely.

“I’ve got to help this football team be more consistent with those, stay more focused on those,” Harsin said. “Have the intensity and discipline to make sure those things we do week in and week out and the things we emphasize as a staff, they get done...as the head coach I have to make sure everybody does that.”

Harsin and company will be presented with the opportunity to display their improvement when they play host to in-state rival Alabama in the 2021 edition of the Iron Bowl. Toe will meet leather at 2:30 p.m. CST inside of Jordan-Hare stadium on Saturday, Nov. 27 on CBS and the CBS Sports app.