KING RICHARD is a story full of family, heart, and tennis 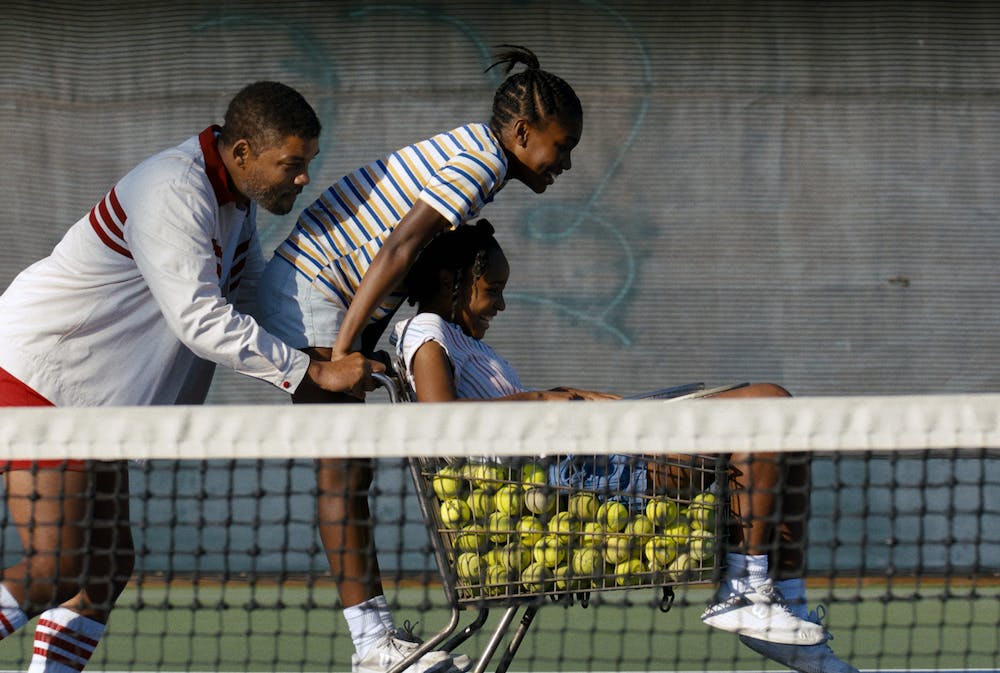 The film stars Will Smith as Richard Williams, putting in one of his greatest performances as an actor. Richard Williams is not a likable person, he’s extra tough on his kids to be the best in whatever they do. He’s made a plan for each of his children before they were born and pushes them on that path. There are a lot of moments in this movie where you will detest what Richard is doing. But the movie does a great job at humanizing him. The film doesn’t glorify or vilify Richard Williams, it just shows him how he was. A complicated man who wanted the best life for his daughters so they wouldn’t have to live on the streets.

The film does a great job during the tennis scenes. It shows some of the competitive aspects of the sport while not overcomplicating it for the average viewer. Demi Singleton plays Serena Williams and Saniyya Sidney plays Venus Williams in the film and both actresses do a fantastic job of embodying Serena and Venus. Its incredible what these young actresses do to replicate the Venus and Serena. Will Smith had this to say about the young actresses, “Saniyya and Demi had to learn how to play tennis like the two greatest tennis players of all time. When I had to try to learn how to play Muhammed Ali, I know how daunting that was, there are professional fighters who can’t move and fight like Muhammed Ali. There are professional tennis players that can’t play like Venus and Serena. I was watching Saniyya and I just want the world to know bot only did Saniyya learn how to play like Venus, Saniyya is left-handed. She learned how to play with her off-hand.”

One of the best parts of the film was Aunjanue Ellis as Oracene Williams. Even though the film is called KING RICHARD, Oracene Williams was just as instrumental in the children’s success as Richard was. Throughout the movie, she makes her presence known and serves as the good cop to Richard’s bad cop. She puts Richard in his place many times and stands up for her kids when Richard takes a “creative route for punishment”. Ellis’ performance is phenomenal, standing toe to toe with Will Smith and stealing the show at certain parts. When asked about her role in the film, Ellis had this to say, “Well I wanna say i’d give a whole lot of credit to these filmmakers that i’m lucky to be with because they sort of insisted that she’d not be in the shadows. As you’ve said we’ve had these stories where you have the heroic male figure, but to do something that we did not see that Oracene was a co-conspirator of this crazy dream, would have been dishonest. We worked on that and tried to give her the presence she deserved to have because that was the truth.”

Another fun aspect of the movie was watching Richard’s dynamic with Venus and Serena’s coaches. Their first coach is Paul Cohen, played by Tony Goldwyn. Cohen is Venus’s first coach and him and Richard have a rocky relationship. Richard started out as the girls’ coach but realized they would never be great if he didn’t get them a coach with great courts and equipment to train with. But Richard can’t stop coaching his kids while they are training. This leads to a lot of conflict along with Richard having full authority over his children. Richard wants them to be the best, but also wants them to have a life and be kids. This conflict is what leads to Richard getting a new coach in Rick Macci. Macci is played by Jon Berthal, who plays a fun but passionate coach. Rick Macci is a legendary coach in tennis who has coached five players who have reached number one in the world. Macci takes the williams family out of Compton, California and brings them to Florida where his facility is. Macci pays for all of the family’s needs out of his pocket, with the deal being that he gets 15% of the girls’ career earnings. Richard also becomes a member of Macci’s staff. Macci and Richard start to butt heads when Richard tells him after they make the deal that he’s pulling Venus and Serena from juniors. Juniors is how the girls get publicity to get on the pro circuit later in life. This leads to arguments between Macci and Richard as if the girls never make any money, Macci loses all the money he invested into the family. When asked about playing Macci, Berthal had this to say “When talking to Rick and so many of the people who have played for him, the thing I heard was just fun. That he loved the game and he made it fun. And I think that was the kind of thing that Richard could get behind, no matter how weird or quirky he was.”

KING RICHARD is a film about family. It tells the story of the Williams’ family and their struggles as they raise some of the greatest athletes of all time. The story puts such an emphasis on the family aspect that you can leave the theatre happy without seeing Venus and Serena become these great athletes. Instead you leave the theatre happy as they were raised to be great people. The film shows the full story and doesn’t leave anything out. Full of heartbreak and triumph, KING RICHARD is the fell good movie of the year and the best film so far of 2021.

You can see KING RICHARD in theaters or on HBO Max on November 19th.