Gobourne’s Return to All-Around Not Enough in Tigers' Loss to No. 1 Florida 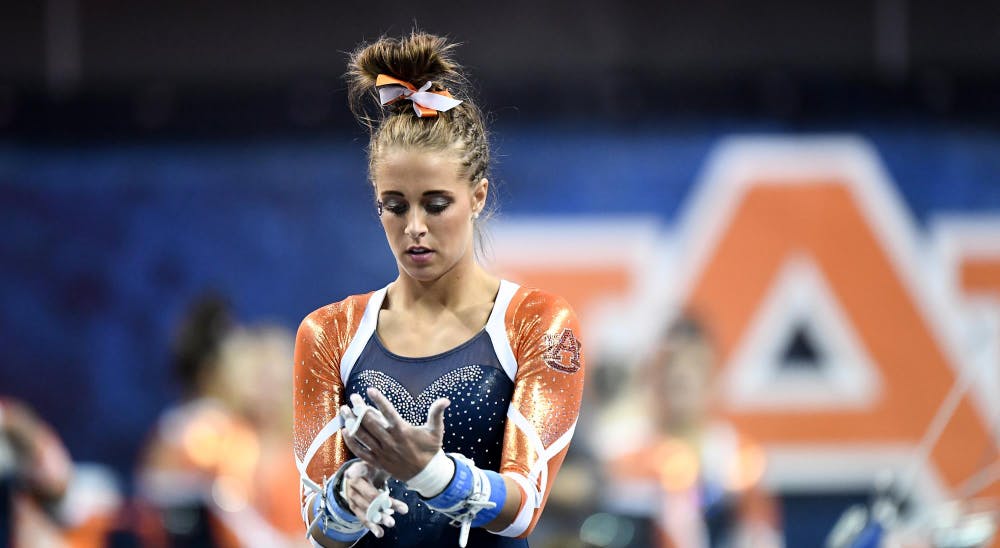 
Drew Watson on Floor vs Kentucky

AUBURN, Ala. (EETV) Gymnastics season is officially underway on the Plains of Auburn, Ala.; however, the hometown crowd did not receive the performance it was likely looking for in its squad’s opener, as Jeff Graba’s Auburn Tigers were unable to lead their season off with a win, falling 197.500-195.725 to the top-ranked University of Florida Gators at home on Friday night.

Loss aside, the head coach was pleased with his team’s all-around efforts and ability to gain experience in the opener.

“Pretty good opening meet,” Graba said. “Used quite a few people who didn’t compete last year on these events...so we got our feet wet and I feel like the girls did a good job. They did a good job handling some of the first meet jitters.”

This is likely a fair assessment, as Friday night’s score of 195.725 was the third-highest opening meet score in program history.

As mentioned by coach Graba, Auburn was able to present a slew of newcomers — or inexperienced athletes — with an opportunity to progress and gain confidence in an SEC meet setting. With senior Drew Watson limited due to injury and a noticeably different roster from 2020, many freshman and sophomores saw the floor.

“Basically, really happy with all of the girls that got their first opportunity on that event,” Graba said. “Really happy.”

While new faces in new places played a key role in the Tigers success on the floor, the return of Derrian Gobourne to the all-around was one of the more encouraging sights for the squad’s leader. After being unable to compete on the balance beam in 2020, Graba was proud of the junior’s ability to transition back to the physically demanding all-around.

Gobourne’s night was highlighted by her 9.900 on the uneven bars and the 9.925 she posted on the floor, a feat the junior was proud to accomplish; however, is not allowing herself to accept as a ceiling.

“It’s just a starting point,” Gobourne said. “Obviously,I wanna build, but I’m really glad where I started. Obviously, I want to get better and better.”

With the loss to the No. 1 Gators behind them, the Tigers are not assuming the road will be any easier from this point on; rather, are adopting the mentality that each team presents a top-level challenge.

“Everybody in the SEC is going to be the same caliber team,” Graba said. “I told the girls it’s an opportunity. You get to open up against the number one overall team in the country.”

Graba’s squad will have the opportunity to bounce back from an opening night loss on Friday, Jan. 15 in Lexington, Ky. when the Tigers take on the University of Kentucky Wildcats. The meet will begin at 7:00 CT and will be broadcast on SEC Network.