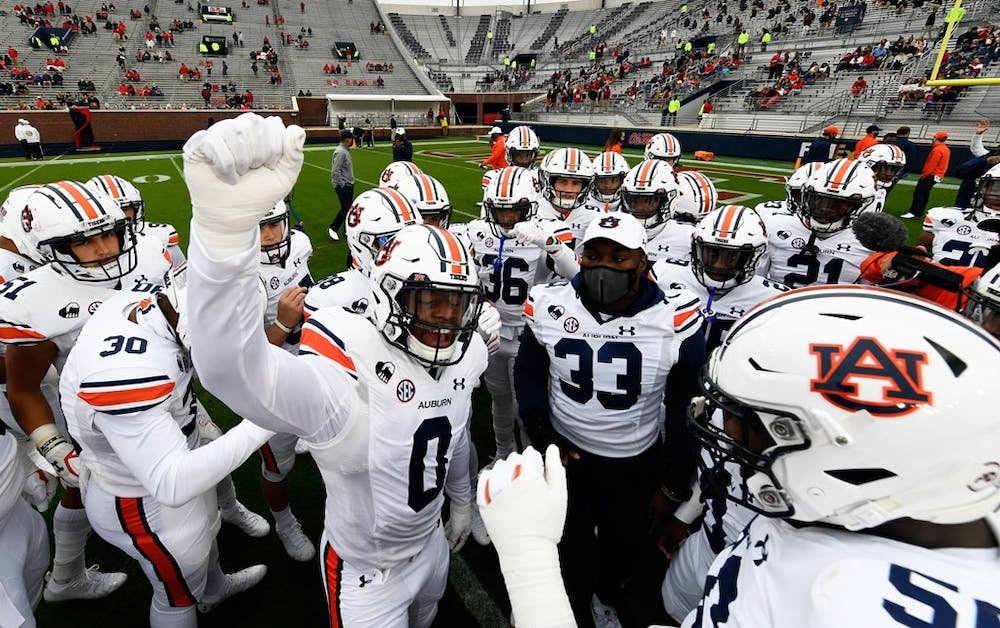 Oxford, MS (EETV)- Auburn escaped Oxford with a 35-28 win in an offensive shootout. Both teams combined for 906 yards of total offense with four lead changes in the game.

Auburn gave the lead away in the second half, but would make a fourth quarter comeback to take the lead after Bo Nix found Seth Williams for a 58 yard touchdown pass with 1:11 left in the game.

The win marks Auburn's fifth straight over the Rebels and their fourth straight win away from home. Here are three takeaways from the game.

Auburn's offense had arguably one of the best performances of the season with 462 total yards. Bo Nix completed 23-30 passes for 238 yards and one passing and rushing touchdown.

The Tigers running game had 47 attempts for 224 yards. This is the third consecutive week that the Tigers have rushed for 200 yards in a single game.

Tank Bigsby had his third straight 100 yard game which hasn't been done since Kerryon Johnson in 2017. Bigsby had 24 carries for 129 yards and two touchdowns.

Auburn did not panic after giving up the lead twice in the game. Unlike last week's game, the Tigers were able to answer after scoring drives from the Rebels.

Nix's connection to Seth Williams seemed to be mended after they were seen in a sideline altercation at South Carolina. Williams had eight catches for 150 yards and one touchdown.

Auburn's offense continues to improve each week. Costly mistakes have been the difference in both of their losses on the road. This week they played clean game without too many mistakes. This performance will give them confidence that they can run the football and make passes.

Auburn had two moments that almost cost them 14 points. The first was in the the third quarter when punter Aidan Marshall had a snap go over his head. Marshall recovered the ball on the Ole Miss 25 yard line to give the Rebels a chance to score before halftime.The Rebels would waste their chance after they tried to fake a field goal on fourth down.

In the fourth quarter, Auburn recieved a kickoff which was believed by Ole Miss to have bounced off Shaun Shivers for a fumble. The Rebels recovered it in the end zone but the officials called a touchback. The play was not reviewed and Auburn would tie the game on the same drive.

The replay showed that the ball went off of Shivers hand. This is not the first time that Auburn has benefitted from a fumble call after there was controversy in the Arkansas game over Nix's backwards spike. The Tigers are fortunate to escape, but they will need to polish up these little mistakes next week.

The Tiger Defense Came Through in the Fourth Quarter

Auburn's defense gave up 444 yards of offense, but it was the final two drives of the game that mattered in the end. Down by one with just over three minutes left, Auburn's defense gave the ball back to the offense who scored to give the Tigers a seven point lead after a two-point conversion.

The Tigers would stop the Rebels from tying the game after a hail mary attempt was intercepted by Jordyn Peters. Although things were difficult, Auburn showed resilience to get the stops that they needed.

What's Next For Auburn

Auburn returns home to face LSU in the latest edition of the Tiger Bowl. LSU is coming off a big win over South Carolina after not playing for one week due to positive COVID cases on Florida's team.

Kickoff for the game will begin at 2:30pm with TV coverage on CBS.