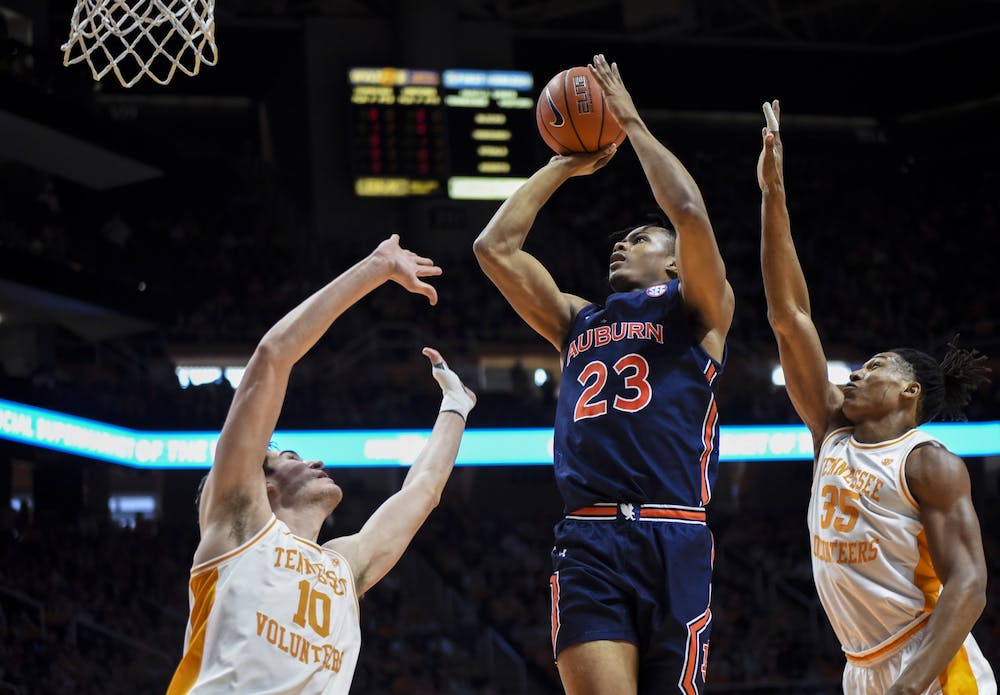 Auburn forward Isaac Okoro (23) in the first half. Auburn MBB at Tennessee in Knoxville, TN., on Saturday, March 7, 2020. James Boofer for AU Athletics

Knoxville, TN (EETV)- Auburn went on the road and defeated Tennesee 85-63 in their second matchup this season. After the loss to Texas A&M, the Tigers were able to earn a crucial win before heading to the SEC Tournament next week.

Bruce Pearl said after the game, "Offensively, I thought we controlled the game with the things we did. We got open looks and the kids knocked them down."

Samir Doughty had a breakout performance scoring a career high 32 points with eight three-point shot made. Doughty scored 15 of his 32 points in the first half alone.

Auburn started the game fast as they had a lead as large as fourteen points. Alan Flanigan would provide a boost off the bench scoring seven points in the first half.

The Volunteers would cut the lead to 11 at halftime as Jordan Bowden hit a three-point jumper as time expired.

Tennesee made a run early in the second half to get within six, but Auburn's three-point shooting was the difference as they hit 14 in total.

Auburn finishes the season 25-6 (12-6 SEC) and they will go into the SEC Tournament as the two seed after Kentucky defeated Florida this afternoon. Auburn will play next Friday against the winner of Arkansas and Texas A&M on Thursday. The game will be at 6pm CT on SEC Network.

AUBURN, Ala. (EETV) - Governor Kay Ivey announced an amendment to the statewide Safer at Home health order in a press conference this morning requiring individuals to wear face coverings in public.

The Southeastern Conference announced they will push back the start date of several fall sports including cross-country, soccer and volleyball until after August 31.