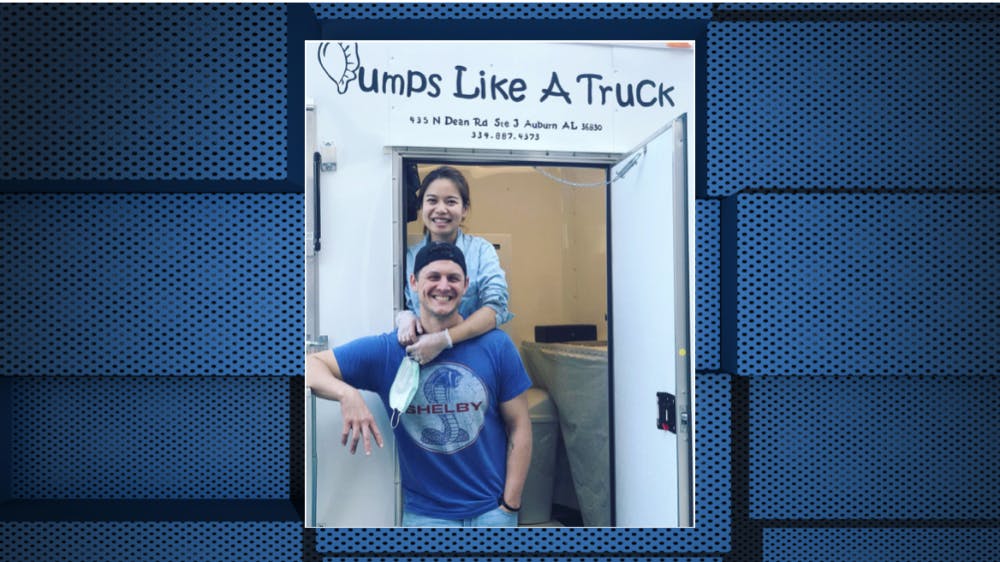 Dykes and his wife, Kunyu Li, pose in front of their food truck

Auburn, Ala. -- In 2014, Whitley Dykes posted a picture of a meal cooked by his mother-in-law on his Instagram account with the caption, “Dumps like a truck,”: a picture that would change his life forever.

Dykes got the idea to open the food truck with the help of his wife because of what he called, “A lack of places for the many Chinese to get authentic food in Auburn.”

The name was inspired by the famous “Thong Song” by the artist, Sisqó, and its line, “dumps like a truck.”

Dykes took this line from the song and started a food truck with a purpose. Dumps Like a Truck was unveiled in late 2017 with the intent of donating 10 percent of the profits to giving children in less economically developed countries “thong” sandals.

The truck works to provide shoes and also raise money for children from impoverished backgrounds so that they will be able to attend school. In late March, Dykes made a trip to Manila, Philippines, and was able to meet some of the children his food truck benefitted.

Dykes, originally from Auburn, returned to college in 2006 at the University of Alabama at Birmingham (UAB) to study international relations and Chinese. Post-graduation, Dykes spent eight years studying in China, where he met his wife, Kunyu Li. Although Dykes graduated from college, he wasn't always sure what life path he wanted to take. This uncertainty is what led Dykes and his wife to return to Auburn in 2014.

“I didn't want to come back to Auburn, at all. I came back because I knew my family was here,” said Dykes. “I had support.”

It was in 2014 when Dykes was presented with the opportunity to work as an Auburn Global advisor. Auburn Global is an academic program geared toward assisting international students with their transition into life at Auburn. Dykes was able to meet hundreds of international students, predominantly from China, which inspired his move to open a food truck for the Auburn community.

“The demand for it, because of all the international students here, helped us to see it and also our desire to just make more of an impact,” said Dykes.

Dykes’ passion is for ministry, a passion that led him to China for eight years after he graduated from UAB. Dykes said that opening the food truck has allowed his impact to go beyond only international students, but to the community as well.

Dykes announced in May that he and his wife signed a lease for a permanent location on the corner of Glenn Avenue, which will be in operation later this year. Dykes hopes to one day be able to open his own nonprofit organization to benefit more causes.

“What I do reminds me of a scripture and the scripture says that my food is to do the will of God and feeding these students and the community helps me,” said Dykes.