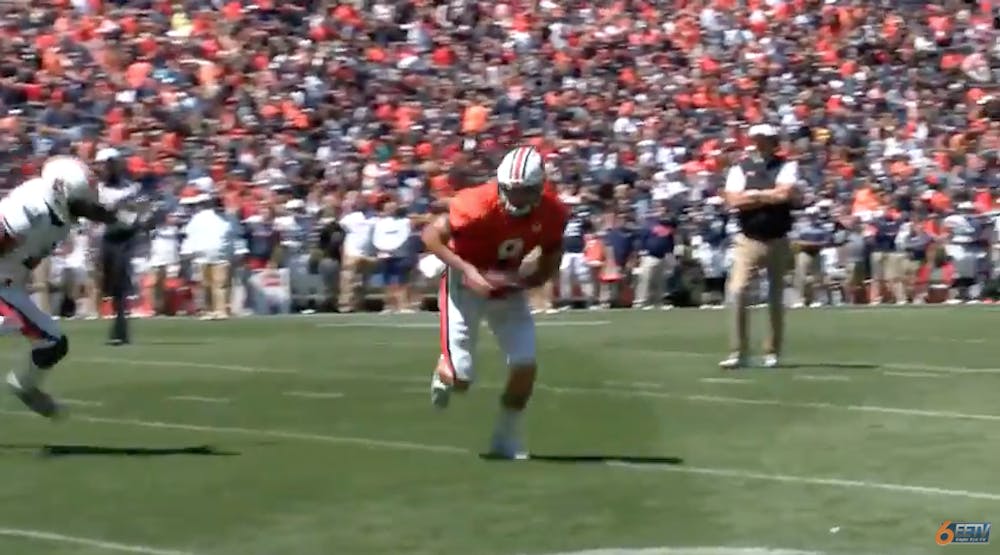 Just some of the stories coming out of A-Day. Both the No. 1 offense and defense performed well in their debut, leading the Blue team to a 37-13 victory over the White team.

Another new season of football, another quarterback competition. The players trying to get the start this year are Jarrett Stidham, Sean White and Malik Willis. Stidham and Willis grabbed the attention of many fans and coaches with their performance at A-Day. Stidham's arm and ability to throw the ball down the field was impressive, but what really stuck out was how mobile he was on his feet. Stidham took off scrambling several times, even picking up a 1-yard rushing touchdown to add to his A-Day accomplishments. Stidham also received MVP honors in the game after completing 16-of-20 passes for 267 yards.

Willis was also successful in running the ball. He impressed head coach Gus Malzahn in his maturity at such a young age.

"He's really doing some things that have impressed Coach Lindsey," Malzahn said. "I thought he managed the offense. I think he took a sack or two today, but that's just from being young. Overall, he's had a solid Spring."

But don't count Sean White out. White did not play in the game as a precaution because of the injury he suffered at the end of last season. White says his injury isn't bothering him anymore and will be ready to go come September.

This new look on the offense all comes from Chip Lindsey. Malzahn says Lindsey wants to balance out running and passing the ball 50-50. With the looks of the quarterbacks' performance at A-Day, an already-solid running game and matured receivers such as Nate Craig-Myers and Will Hastings, Lindsey looks to accomplish that in his first season as offensive coordinator with Auburn.

Kerryon Johnson and Kamryn Pettway are set to lead the team in running the ball. Pettway did not play in the A-Day game, like White, because of his injury suffered last season. It was a healthy scratch to avoid an unnecessary injury before the start of the season. Johnson did play, running for 47 yards and scoring a touchdown. He suffered a small ankle injury, but it is not something that will keep him out for the Fall.

On the defensive side, Kevin Steele's defense had to overcome the loss of two of its key starters from last season, Montravious Adams and Carl Lawson. For a Spring game, the defense performed fine without them.

"Our first defense is really taking a step forward," Malzahn said. "They've been a handful. Overall, I would say the defense has probably got the best of the offense as far as overall Spring, but you can tell that both groups are taking that step forward."

There are a few areas that the defense still looks shaky on, such as the vertical pass; however, there is plenty of time to make improvements between now and September.

Auburn's first game of the 2017-2018 season kicks off September 2, against Georgia Southern in Jordan-Hare Stadium.