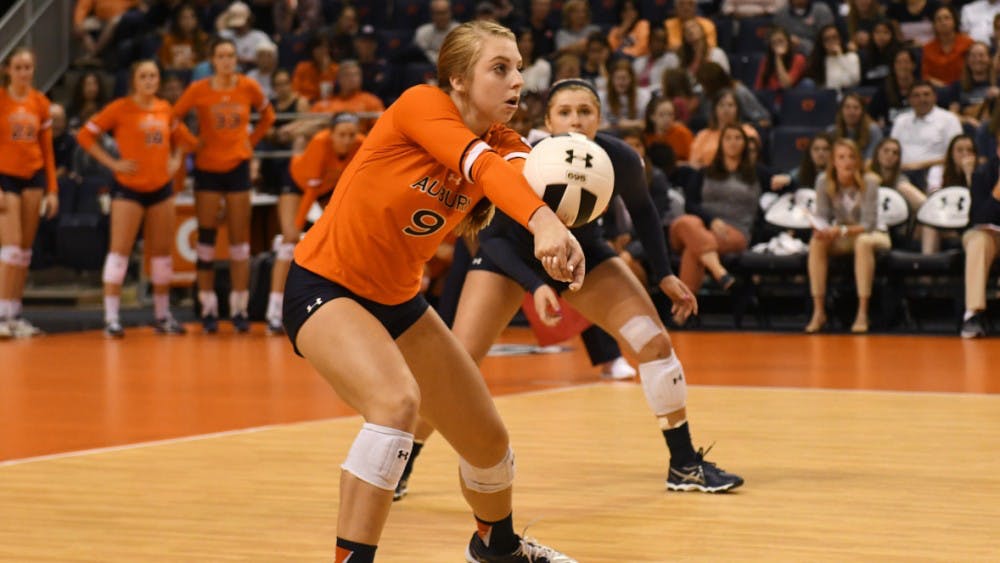 The Tigers' young talent made a bold statement both offensively and defensively at the Blazer Invitational.

Freshman pin hitter Akasha Anderson led the Tigers' offense with a startling 24 kills and a total of four aces. Anderson set a career-high for kills (24), digs (14), and aces (4).

Following close behind, freshman pin hitter Madison Scheer had 13 kills. Although UAB had more kills than Auburn, the Tigers had only 12 errors compared to the Blazers' 29.

Auburn's defense was able to subdue UAB due to their strong blocking game.

However, UAB refused to go down without a fight. Senior outside hitter Alex Kells led the Blazers' offense with 23 kills as Graduate outside hitter Maia Rackel followed with 19 kills.

However, Auburn solidified the win with Morton and sophomore libero Fallen Lanham's three aces and Anderson's 24th kill of the match.

On defense, junior middle blocker Chelsey Harmon led the Tigers' defense with a startling ten blocks while Anderson (5) and Zimmerman (4) followed close behind.

Harmon also set a career-best with her ten blocks, making her the only Tiger player to establish double-digits in blocks this season. Anderson set another career-high of four blocks. Sarah Morton was a star on the back row while setting a career-high of 25 digs as Sinness followed with ten digs.

After the Tigers won the first and second sets, Troy pushed back against Auburn for a win in the third set.

Auburn commanded the lead early in the first and second sets against Troy. Even though the Trojans came out with the win in the third, the Tigers managed to solidify the win in the fourth set with their strong blocking game.

Anderson led the Tigers' offense with 15 kills while Scheer followed behind with 12. Jackie Barrett and Cassidy Tanton led the team in aces (2).

Kemp led Auburn's defense with four blocks as Barrett and Harmon followed with three. Morton controlled the back row with a staggering 16 digs.

"The other piece we preach all the time is defense, defense, defense," Crouch comments, "They responded just like they did yesterday. When they are able to make adjustments on the fly and respond to what we're talking about bodes really well for the future."

Overall, Auburn was able to dominate the UAB Invitational through their young talent's ability to capitalize on offensive chances and maintain a strong defense. The Tigers came out on top, with many players setting career highs.

"I thought it was a huge step forward. I could see our young players growing up on the court. This is the best team that we've played so far this year," Crouch states. "They were experienced and something different that we haven't seen before."

The Auburn Tigers play this Friday at 1:30 pm CT at the JSU Invitational against the Southern Miss Golden Eagles.