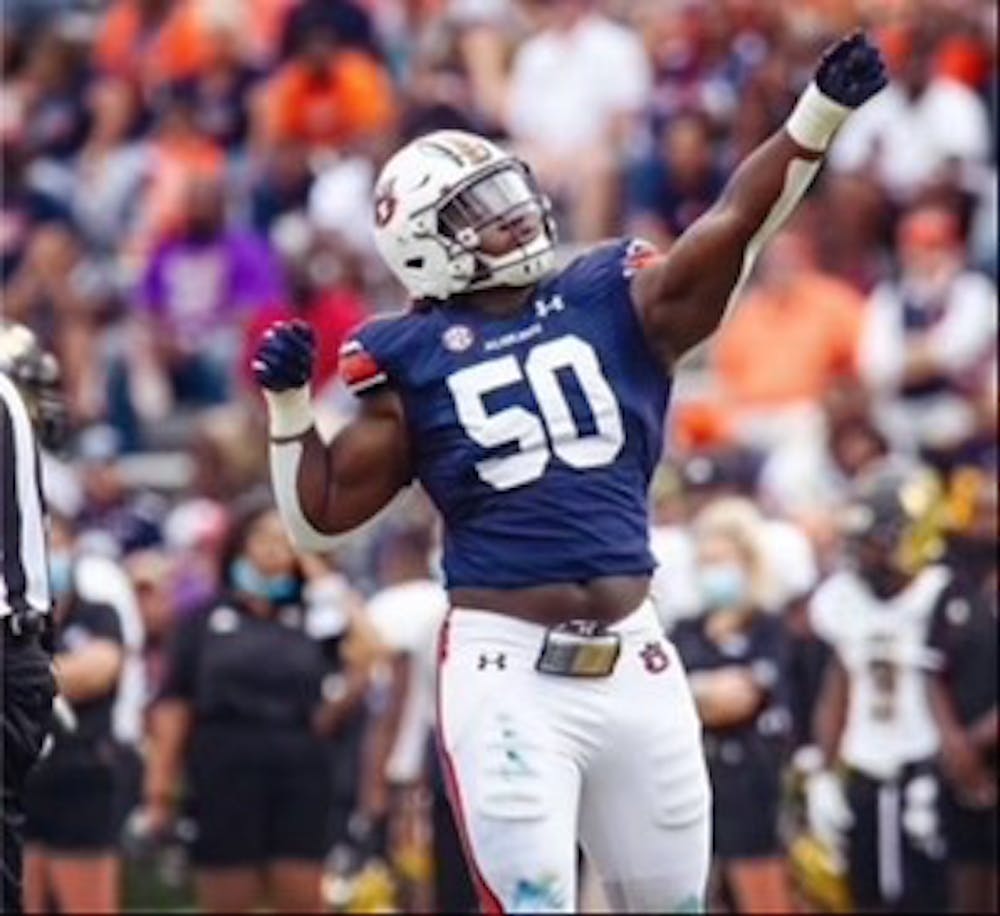 Auburn, Ala. (EETV) - Walking through the Student Center at Auburn University, 279-pound defensive tackle Marcus Harris radiates with a confidence that cannot be ignored. He gave a firm, proper handshake as he sat down. As he began to speak, a gentle giant emerges.

Harris was strong on the field for the Tigers during the 2021 season, having 16 solo tackles, 11 assisted tackles, some sacks and recovered a fumble for a touchdown. This was Harris’ first season at Auburn University and with the Auburn family.

“I have been to some Auburn games growing up but playing in it is so unreal, like a dream come true,” Harris said, his face lit up when he was talking about his first game. “If you told me in high school, I would be at Auburn I would not have believed you.”

Around campus he is just a sophomore trying to balance classes, a social life and an athlete schedule. An athlete’s schedule can get crazy while other students have the freedom to go home and see family during breaks, this is not always the case for athletes. If a player’s family does not live close it can get challenging to have time to see them.

He knows what it is like because before playing at Auburn, Harris played at Kansas. That was his top pick from his 23 offers in high school. He went there because he had so much respect for Head Coach Les Miles. However, when Miles got fired, deciding to move closer to home was easy.

Harris said, “I feel for others I once was at a school where I was 12 hours away and wish that other players can use their free time to be with their family.” Harris was lucky because his mother, Pamela Blocton, never missed a game, regardless of the distance.

Harris stated, “Being without family can take a toll on people and that it took a toll on myself.” He missed out on parts of this nephew and nieces’ life in fact when he got back from Kansas his niece did not remember him. She was a couple months old when he went to Kansas and so there wasn’t time to build a bond. Since he has been at Auburn, which is only 30 minutes away from his hometown of Montgomery, Alabama, he has been able to connect with his family more.

One thing that helps these athletes with missing their family is the deep connections that they make at Auburn. It is no secret that Auburn students consider themselves one big family. Others on the outside might feel that people only want to get to know players because one day they can be famous making millions. Harris does not feel like other Auburn students only want to get to know him because of football, and that you can tell if someone is genuine or not. His experience is that most people did not know that he played football when he got to Auburn because he was the new guy and people were friendly.

Some players have spoken out about backlash they get when they do not win or do not have a good game. Harris said, “The fans are behind us 100 percent, win or lose.” He does not take negative comments to heart and uses it to make him better. He is already hard on himself when he messes up. “People are always going to have an opinion about you, and in the real world you can lose your job if you let it get to you.” Harris said.

Being in the spotlight can get to players heads, but not Harris. He wants to use his time to show kids that they can do anything. People look up to these players and according to Harris, when he goes home a lot of kids want to take pictures. He wants to stand in as a positive role model. “If I had someone like that growing up,” Harris said, “I would have been better prepared,” He explained, “They see me and see that I came from a bad environment and then they can feel that they can have the same opportunity as I have.”

Harris one day hopes to go to the NFL. While Auburn does not have any programs to help players navigate a career in the NFL, Harris says that the coaches do a good job of helping to prepare them.

He is currently in the liberal arts school at Auburn, studying to get a business and communication degree. His backup plan, in case he does not end up playing for an NFL team, is to become an agent for the NFL. He plans to continue at Auburn for one or two more years and then declare for the NFL draft.

In Harris’s free time he likes to spend time with family and watch mystery shows. He also loves making connection with people and having genuine relationships.

“I pride myself on being humble and interacting with my peers,” Harris said, “Even though I am a football player, I want people to look at me as a regular person.”