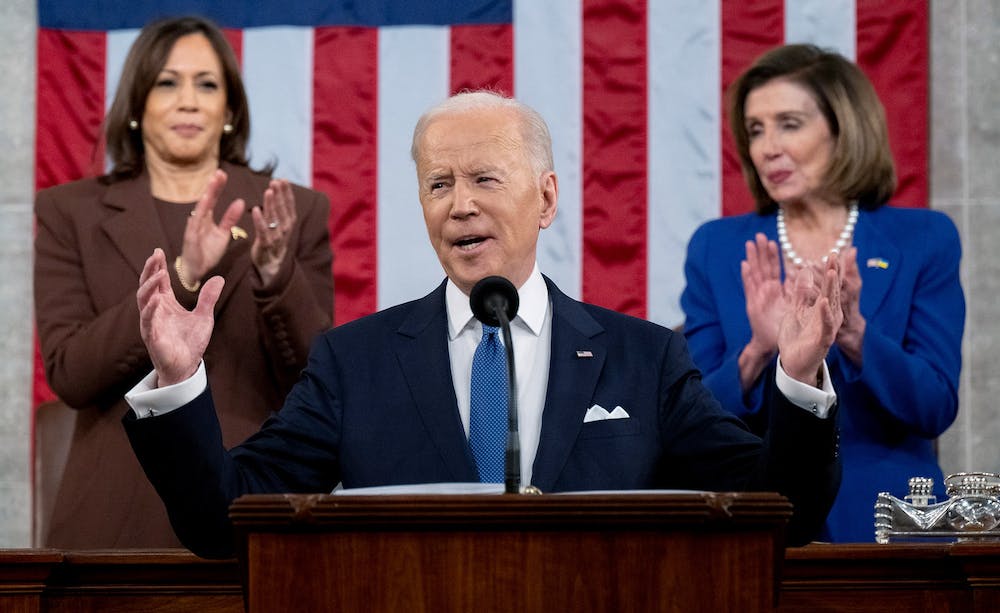 President Joe Biden delivers his State of the Union address to a joint session of Congress at the Capitol, Tuesday, March 1, 2022, in Washington, as Speaker of the House Nancy Pelosi and Vice President Kamala Harris look on. (Saul Loeb, Pool via AP)

President Biden began his address by focusing on the war in Ukraine, congratulating the Ukrainian people for rallying together and standing up to the Russian invasion. Oksana Markarova, the Ukrainian ambassador to the US, sat with the First Lady and was recognized and given a standing ovation by President Biden and the audience. "We, the United States of America, stand with the Ukrainian people," stated Biden. "The Free World is holding him [President Putin] accountable." On top of the sanctions the US had previously imposed, Biden announced the closing of US airspace to Russian airplanes. However, Biden did say that US troops would not engage with Russian troops. Any US troops are there to protect NATO allies should Ukraine fall and Russia "keep moving west."

President Biden also touted the accomplishments of his administration and the Democratic-controlled Congress. The American Rescue Plan Act, the Bipartisan Infrastructure Law, creating a record number of jobs in his first year, and more.

In regards to the economy, President Biden placed a lot of the blame on the Trump administration, as well as on COVID-19. He promised that in projects moving forward, the US will "buy America" meaning buying American goods and materials "from start to finish." To fight inflation, President Biden laid out his plan which included cutting the cost of prescription drugs, cut energy costs for families through clean energy tax credits, lowering the cost of child care, and no raising of taxes on people earning less than $400,000 a year. He called upon Congress to pass many of his proposed initiatives such as $15 minimum wage, child tax credits, and passage of the PRO Act.

On the topic of COVID-19 and the mandates that have been in effect accross tha nation, President Biden spent considerable time discussing whats to come. "I know you are tired, frustrated, and exhausted." Cases numbers are down considerable across the nations, and many states are beginning to lift mask mandates. Auburn University lifted it's mask mandate just a few weeks prior. To remain safe moving forward, Biden laid out some recommendations: get vaccinated and keep up to date with boosters and pills, be prepared for new varients, end the shutdown of schools and businesses, and "we will keep vaccinating the world" against Covid.

Biden called that it was time for Americans "to come together" as a country. With police reform, he highlighted the reform done so far such as adding body cameras and other initiatives from the Department of Justice. He further stated that "the answer is not to defund the police, its to fund the police." This comes as a stark contrast to many of the Democrat Party comments of 2020 where defunding of police was called for across the nation.

Another individual President Biden acknowledged was Supreme Court Justice Stephen Breyer. "An army verteran, a constitutional scholar, retiring Justice of the United States Supreme Court. Justice Breyer, thank you for your service." After a round of applause, Biden then laid out why his nominee, Kentanji Brown Jackson, should be swiftly confirmed and serve as the next Associate Justice.

The next step for America moving forward, according to President Biden, is to keep "advancing liberty and justice" within the United States. He plans to do this by granting more citizenship to undocument immigrants, protecting the rights of women, and protecting the LGBTQ+ community.

To promote bipartisanship and unity, Biden proposed four initiatives. "First, beat the opiod epidemic... Second, lets take on mental health, especially among our children... The third piece of that agenda is support our veterans. Vetrans are the backbone and spine of this country... Fourth and last, lets end cancer as we know it."

President Biden closed out his speech by discussing his optimism for the nation and its future. "I know there is simply nothiong beyong our capacity. We are the only nation on Earth that has turned every crisis we've faced into an opportunity. The only nation that can be defined by a single word: Possibilities. So on this night, on our 245th year as a nation, I've come to report on the state of the nation, the state of the Union and my report is this. The state of the Union is strong because you the American people are strong."

Following the State of the Union address, Governor Kim Reynolds of Iowa gave the Republican response, which can be seen here. However, she did not give the only response. Represenative Rashida Tlaib of Michigan gave a response on behalf of the more progressive Democrats. Her statement can be watched here.