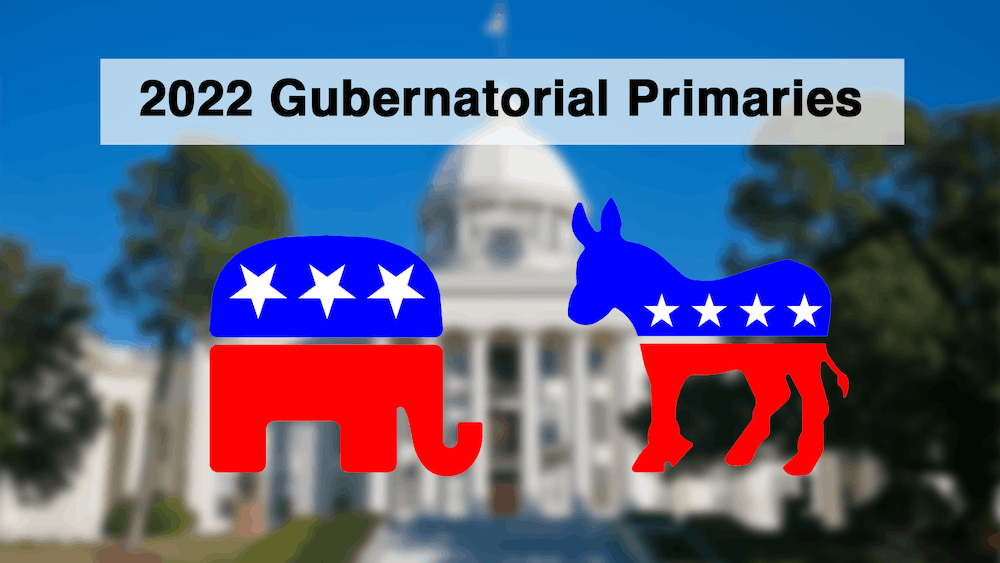 MONTGOMERY, Ala. (EETV) - The gubernatorial race is packed this year with six Democrats and nine Republicans vying to be Alabama's next Governor, including incumbent Kay Ivey.

Yolanda Rochelle Flowers was born and raised in Birmingham. Flowers has over 20 years of experience in academia, including spending three years (2016-19) as a full-time substitute teacher for the Birmingham City Schools System. According to her campaign website, Flowers is focusing on three main points: Education, Healthcare, and Criminal Justice Reform.

Patricia Salter Jamieson is from Birmingham and is running to be the Democrat nominee for governor. No other campaign info could be found.

Arthur Kennedy is running to be the Democrat nominee for governor. No other campaign info could be found.

A businessman and musician from Enterprise, Chad "Chig" Martin declared his candidacy for governor in December 2021. According to Martin's campaign website, he is a "conservative democrat" who launched the first CBD and hemp dispensary in the state, Honeysuckle Hemp Company. His campaign is focusing on bringing the lottery to Alabama, fully decriminalizing Cannabis in Alabama, and promoting job growth across the state. Check out Eagle Eye's interview with Chad Chig Martin below.

Malika Sander-Fortier is from Selma and currently serves as the state senator for District 23. She has held that seat since 2018. No other campaign info could be found.

Doug "New Blue" Smith is from Montgomery. Smith previously ran in the 2018 gubernatorial primary for Democrat nominee. He received a little over 3 percent of the vote compared to Walt Maddox's 55 percent. His anti-Kay Ivey campaign promises to fight two main issues - COVID and inflation.

Kay Ivey is the current Governor of Alabama and is up for re-election. An Auburn alumna, Ivey has long been involved with Alabama politics, serving as the State Treasurer 2003 - 2011, Lieutenant Governor from 2011 - 2017, and has since been Governor. Ivey was originally sworn into this seat following the resignation of Robert Bentley on April 10, 2017, becoming only the second female governor in Alabama history. Ivey was re-elected in 2018 to her first full term of governor. Ivey is eligible for another term as she only served a year and a half when Bentley resigned. As the incumbent, Ivey's campaign focuses on her accomplishments so far, including banning vaccine passports, the lowest unemployment in Alabama history, and record funding for schools.

Hailing from Montgomery, Lindy Blanchard declared her candidacy for governor on December 7, 2021. Originally, Blanchard was running for Senate before switching and entering the gubernatorial race. Also an alumna of Auburn, Blanchard has strong ties to President Donald Trump. She served as the U.S. Ambassador to Slovenia from July 2019 to January 2022. Blanchard is also known for co-founding 100x Development Foundation in 2004, an organization designed to fight poverty and improve children's lives across the world. Blanchard's campaign promises include ending many state taxes, bringing constitutional carry to Alabama, and improving education in all schools. Check out Eagle Eye's interview with Lindy Blanchard below.

Robert "Lew" Burdette is from Birmingham and is the President of King's Home, a Christian non-profit. Burdette announced his candidacy on January 4, 2022. The former Chief Operating Officer and Executive Vice President for Books-A-Million is a political outsider and aims to "break the cycle" of politicians in Montgomery. His campaign website lists a variety of goals should he be elected governor, ranging from improving healthcare to education to prison reform. Check out Eagle Eye's interview with Lew Burdette below.

A resident of Limestone County, Stacy Lee George announced his candidacy on July 1, 2021. A correctional officer for the Limestone Correctional Facility, George is not a new face to Alabama politics. From 2000 - 2008, he served as the Morgan County Commissioner, the first Republican to ever serve in that role. He also ran for Governor in 2014 against Robert Bently, receiving only six percent of the vote. George's platform focuses on unifying Alabama citizens, rooting out corruption across the state, and overall elevating the status of Alabama. Check out Eagle Eye's interview with Stacy George below.

Son of former Governor Fob James, Tim James is an Opelika resident that declared his candidacy on January 12, 2022. A former running back for the Auburn Tigers, James currently is the President of his own business, Tim James Inc., which builds infrastructure through private investments. Key issues James highlights are the improvement of Alabama schools, stopping casino and gambling efforts across the state, repealing taxes such as the 2019 gas tax, and reducing access to medical marijuana. James previously ran for governor in 2002 and 2010. Check out Eagle Eye's interview with Tim James below.

Aside from qualifying for the primary election, no campaign info for Donald Trent Jones could be found.

Opelika pastor, Dean Odle, announced his candidacy for governor on September 17, 2020. A vocal opponent of Gov. Kay Ivey, Odle is campaigning to stop the "New World Order" according to his campaign website. Key issues and stance Odle's website promotes is that he is anti-vaccine, anti-communism, pro-life, and supports improving Alabama's education. Check out Eagle Eye's interview with Dean Odle below.

Mayor Dave Thomas of Springville announced he was entering the gubernatorial race on January 4, 2022. A familiar name to Alabama politics, Thomas was elected as mayor of Springville in 2020. Previously, he spent eight years, 1994-2002, in the Alabama House of Representatives. A self-proclaimed free-market economist, Thomas is very vocal about being pro-cannabis as well as believes that his opponents are "out of touch" with Alabamians.

Dean Young of Orange Beach announced his candidacy for governor on February 2, 2022. A strong advocate of the right to own guns, no new taxes, and Christian values, Young launched his campaign by attacking Governor Ivey for using the Ten Commandments as a political stunt as well as calling Ivey a tyrant. Young previously ran in the 2013 and 2016 congressional races to represent Alabama's first district, losing both times to Bradley Byrne. Young also served as a campaign advisor to Roy Moore in the 2017 special election.