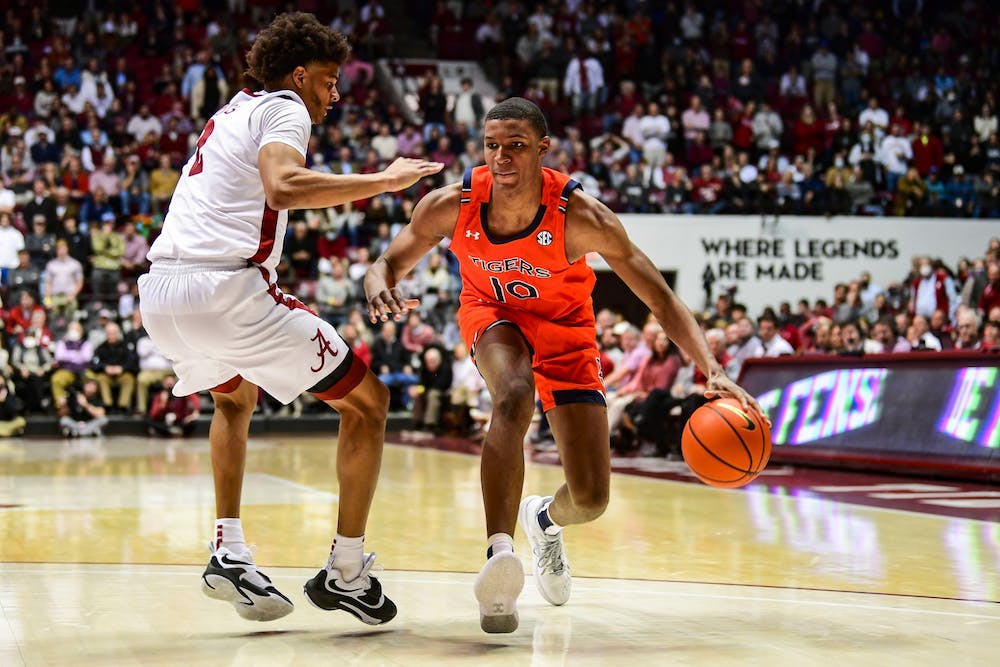 TUSCALOOSA, Ala. (EETV) - Chants of “Let’s go Auburn” erupted in Coleman Coliseum as the Tigers went on to defeat the Crimson Tide 81-77 in a game that had 10 lead changes and eight ties. With the win Auburn moves 15-1 on the season and 4-0 in league play.

“You win at Alabama, you make history.” said Coach Pearl after the game.

Jabari Smith had a career-high 25 points on 8 for 14 from the field including 3 for 6 from beyond the arc. He also added seven rebounds and an assist during his 34 minutes on the court.

"It felt great. We knew this would be tough. We just came out here and focused on staying together. Stay poised, shoot my shots." said Smith following his career-high.

Smith was one of four Tigers with double-digit points with Wendell Green scoring 19 and KD Johnson scoring 13, but it was Allen Flanigan who went a perfect four for four from the charity stripe in the last minute to give Auburn the win.

The Tigers struggled with fouls for the second straight game, committing 24 personal fouls over the match.

Walker Kessler struggled the most picking up two fouls in the first three minutes of play. The big man would only play 13 minutes and fouled out with just two points.

The teams were well matched in the first half, Auburn went on an 11-2 run with 5 minutes left in the half with seven points from KD Johnson to give the Tigers a nine-point lead that the Crimson Tide were able to cut to five by the end of the half.

Auburn started to pull away midway through the second thanks to the scoring power of Green who had 13 points in the 2nd half alone. The Tigers would pull away to a 14 point lead with 7:57 left to play.

The Crimson Tide would not go down without a fight as they roared back with a 14-point run to tie the ball game at 73. Alabama's Jaden Shackelford powered the Tide on the run as he scored nine of the 14 points including two three-pointers that lit the Alabama faithful up. Shackelford scored four points the rest of the night.

The teams would trade free throws before a Johnson layup and four straight free throws from Flanigan iced the game to give Auburn the win.

Smith and the Tigers ended Alabama's 12-game home win streak and moved their own win streak to 12. The Tigers will return to action on Saturday when they travel to Oxford, Mississippi to take on Ole Miss. Tip-off is set is for 7:30 PM CST and will air on SEC Network.