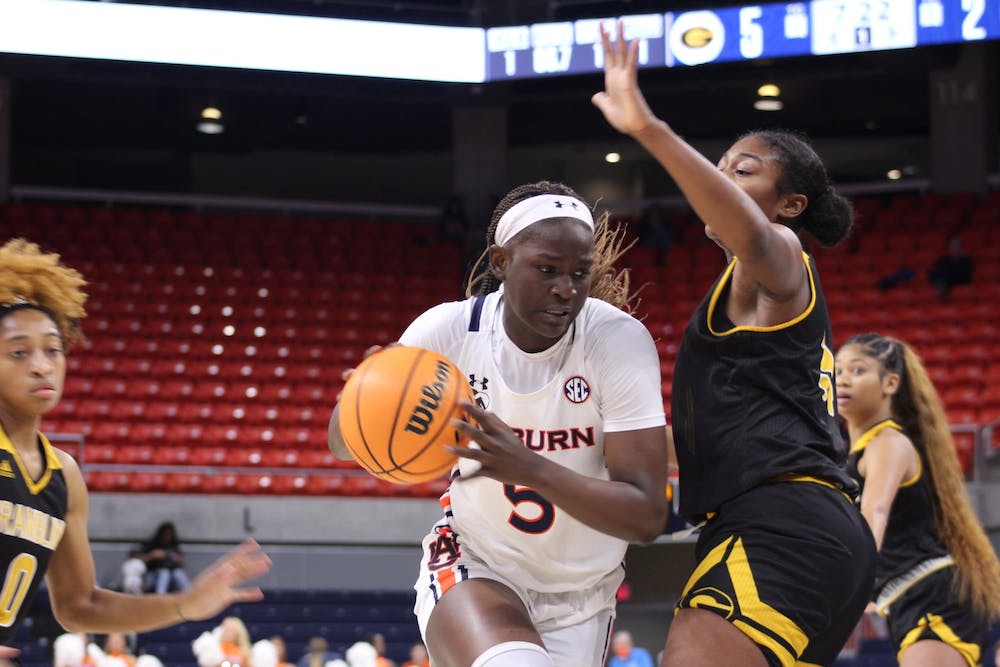 AUBURN, ALABAMA (EETV) When first-year head coach Johnnie Harris and the rest of the Auburn Tigers stepped out onto the hardwood on Saturday afternoon, the group was presented with the opportunity to accomplish a feat the program had not seen achieved since the 2018-19 season: winning 5 games in succession. Harris’ squad was up to the challenge, defeating the Grambling State Lady Tigers (FINAL) and building upon what is shaping up to be an impressive first year for the new staff.

Although the hometown Tigers got the job done, their opponents were not going to make the task an easy one. Grambling opened the contest on a 5-0 run, forcing Harris to use a timeout in the early going to make much-needed adjustments.

“We just wanted our team to go out and play hard and be tough,” Harris said. “I didn’t think we started out that way. Had to get a quick early timeout to remind them that we’re playing on our heels and we don’t want to do that.”

At the conclusion of the first quarter, Auburn found itself ahead of the Lady Tigers 19-15, marking the final lead change of the contest.

“I didn’t particularly think we played a good game today,” Harris said. “But we are getting better. We have a lot we need to work on; they understand that.”

The pair of tiger opponents headed to their respective locker rooms at halftime separated by just eight points with Auburn ahead 38-30.

When time came to return to the court for the final 20 minutes of play, junior guard Honesty Scott-Grayson decided that it was time to step on the accelerator. The standout member of Auburn’s backcourt posted 8 points in the third quarter alone.

Scott-Grayson’s offensive showcase was contagious; the Tigers posted an additional 12 points, held Grambling to just eight and expanded their lead to an insurmountable 20.

Harris was proud of her guard’s ability to lead.

“Honesty is very unselfish,” Harris said. “We go where she goes. She had to take over at point with Sania being out.”

After watching her teammate put on a clinic in the third, junior forward Jala Jordan laid claim to the final 10 minutes on the hardwood. The sophomore guard tied Aicha Coulibaly for the team lead in points in the first half and proceeded to go get her 20-piece as the game moved towards its conclusion, posting an additional 10 points and brining her total on the afternoon to a career-best 22.

The forward claims to have been in her own world throughout the contest.

“I don’t really know what was going through my mind,” Jordan said. “Coach D really has helped. They’re putting us in the best position possible to win.”

Behind a combined 53-point effort from Jordan, Scott-Grayson and Coulibaly the Tigers found themselves on the winning end of a 82-58 route, successfully pushing the hot streak to five and giving the team it’s sixth win in seven games.

With their defeat of the Lady Tigers officially in the books, the orange and blue has just one day of practice to prepare a push for their sixth straight win; the group will play host to the 4-6 Kennesaw State Owls inside of Auburn arena on Monday, Dec. 20 at 12:00 p.m. CST. Live broadcast of the contest will be available on SEC Network Plus and the Auburn Radio Network.