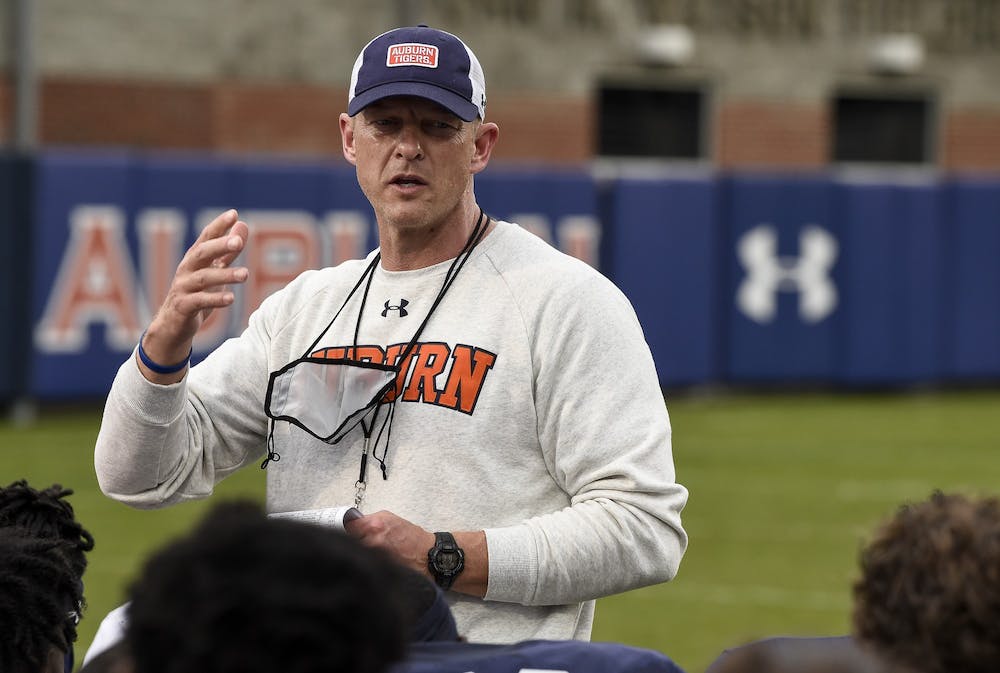 AUBURN, ALABAMA (EETV) After his first full year as head coach of the Auburn Tigers, the time has come for Bryan Harsin to see results on the recruiting trail. Many of the nation's most talented high school athletes have made their decisions and will be inking their national letters of intent to their respective univeristies during Wednesday's National Signing Day early signee period. Eagle Eye TV will continue to provide live updates of Auburn signees as information becomes avaliable.

DAMARI ALSTON: A July commit — and the first signee of Harsin's 2022 recruiting class — Alston brings with him a solid frame and impressive speed. The running back posted 1,639 yards and 27 touchdowns on an even 200 touches as a senior in 2021. Listed as the No. 3 overall recruit at the position, the standout tailback became the school's all-time leader in rushing yards (4,195) and rushing touchdowns (62) during his time at Woodward academy. The newly signed recruit will likely prove an asset in the Tiger running back room following the departure of Shaun Shivers.

CALEB WOODEN: Wooden's inking of his NLI made him the second signee of the day and the first for Derek Mason's defense. A 6-foot-2 safety from Lawrenceville, Georgia, Wooden is listed as a 3-star by 24/7 sports and will look to fill in the holes in a secondary left vacated by departing senior Smoke Monday and transfer sophomore Ladarius Tennison. After announcing his commitment to the orange and blue on July 8, the standout safety posted 49 tackles, four interceptions and a pair of tackles for loss as a senior at Archer high school.

MICAH RILEY-DUCKER: Harsin's staff continued its successful morning by inking a 24/7 sports 3-star tight end in Riley-Ducker. Standing at 6-foot-6, 235-pounds, the Bellevue, Nebraska product brings both the build to protect his backfield and the ability to keep defenders honest in the pass game. He will seek to mold himself into the Harsin offensive scheme which has proven to be heavily reliant upon the tight end position to this point.

JAY FAIR: The fourth Auburn addition of the day, Fair brings in some much-needed help to the Tiger receiving core. Listed as a 3-star by 24/7 sports, the Rockwall, Texas native stands at 5-foot-10, weighing in at 175 pounds; however, his catch-and-run abilities should prove a sight for sore eyes within the Auburn fan base. Yet another July commit, Fair stands out when it comes to winning the battle for 50-50 balls and has the proven ability to create seperation between himself and defenders.

From the Lone Star State to The Plains 🦅

ALEX McPHERSON: McPherson is the younger brother of Cincinnati Bengals kicker — Evan McPherson — who has been making waves in his rookie season in the NFL. The three-star from Fort Payne, AL has shown off his kicking power in his senior season hitting an AHSAA record tying 61-yard field goal and almost hit a 70-yard bomb in game. McPherson is the top ranked kicker in the 2022 class nationally and will bolster Auburn’s tradition of great kickers.

HOLDEN GERINER: A four-star quarterback from Savannah, GA was Auburn’s first commit for the Class of 2022 and made it official on National Signing Day. The 6-foot-3 210-pound pro-style QB led Benedictine Military School to a 4A State Championship. Geriner completed almost 68% of his pass attempts in his senior campaign for over 3,300 yards, 36 touchdowns and tossed just three interceptions. Geriner’s accuracy stands out; he can dart a pass through defenders or put some air under it for an over-the-shoulder catch.

AUSTIN AUSBERRY: Derek mason continued to turn heads on Monday morning when 4-star corner Ausberry committed to Auburn over seemingly certain LSU. A native of Baton Rouge, the 6-foot corner is a physical back who — based on his tape — will be able to play either position in the secondary at the SEC level. His addition bolsters a secondary wwhich many expected to be a weakness in the Auburn defense going forward.

From The Boot to The Plains 🦅

ENYCE SLEDGE: Up next was yet another piece to the developing Tiger defense in 24/7 Sports 3-star defensive lineman Sledge. At 6-foot-3 and 315-pounds, there is little doubt that the Monroe, Louisiana product has the frame for the task; however, what is even more impressive about him is his raw talent combined with the ability to menouver well on his feet. Listed as the No. 36 overall prospect in Lousiana, Sledge is currently amidst his senior basketball season.

The Boot ▶️ The Plains

JD RHYME: The Tiger secondary keeps improving with the addition of Rhyme. After committing to LSU on Jan. 8, the Valdosta, Georgia product decided to flip his decision to Auburn on Tuesday and opted to sign to the program amidst the early signing period just one day later. A 6-foot-1 24/7 Sports 4-star corner, Rhyme's addition to the Tigers takes the Auburn secondary from something worth keeping an eye on to must-see T.V.

MARQUISE GILBERT: Harsin's staff certainly grabbed the attention of the college football world when it gained a commitment from No. 1 safety and No. 7 overall JUCO prospect Gilbert. A native of Palm Coast, Florida, Gilbert posted 25 tackles with two pass breakups while playing for Hutchinson Community College in 2021. He will look to further bolster the Tiger secondary and comes to the Plains with three years of eligability.

POWELL GORDON: A 24/7 Sports 3-star linebacker, Gordon's decision to ink his letter of intent to the Tigers means staying home. A soon-to-be graduate of Auburn high school, the linebacker looks to join a linebacker room which is in certain need of depth following the departure of Zackoby McClain and who is not yet certain of the rising senior Owen Pappoe given his NFL draft eligability. Gordon recorded 97 tackles and nine sacks as a senior for the AHS Tigers.

OMARI KELLY: The four-star athlete totaled 84 receptions for 1335 yards with 14 all-purpose touchdowns in his senior campaign for Hewitt-Trussville High School. Kelly is a good route-runner with great hands. Kelly chose Auburn over Alabama, Georgia, Kentucky, and UCF. He was recruited to play wide receiver at Auburn, but with experience playing safety, he can make the switch to defense relatively easily.

KEIONTE SCOTT: Scott is a four-star JUCO transfer cornerback and the number three JUCO player in the class; at six-feet tall and 185-pounds, Scott has quick feet, good awareness and instincts to be able to make a play on every ball played in his vicinity. Scott is a scrappy corner who uses his hands to his benefit which makes it difficult for wide receivers to get any room for a catch. Scott tallied three interceptions and 10 pass breakups on the season. Scott also ran track in high school as a sprinter and long jumper.

EJ HARRIS: Breaking the trend of defensive signees, Harris became the first offensive lineman and second Auburn high school product to finalize his decision to stay home. A 3-star according to 24/7 sports, Harris chose Auburn over the likes of Oregon, Arizona State and Arkansas; his commitment marks the dawn of a new era in what Tiger fans hope proves to be a commitment to recruiting — and developing — a solid offensive line.

ROBERT WOODYARD JR. : Woodyard's decision to come to Auburn was arguably the most significant occurance of the early signing period for Harsin as the 24/7 Sports 4-star linebacker flipped his commitment from the University of Alabama, marking the first occurance of such phenomenon since the induction of Auburn's new staff. Woodyard is a 6-foot-1 210-pound native of Mobile, Alabama who posted 84 solo tackles, three interceptions and a forced fuble despite missing three games in 2021.

CAMDEN BROWN: Despite still not naming an offensive coordinator, Harsin's staff was able to grab yet another talented wideout to add to its arsenal. Standing at 6-foot-3 and 190-pounds, Brown brings a big frame and an impressive skillset to the gridiron, averaging 20.1 yards per catch and coming down with seven touchdowns in just nine games as a senior in 2021. A native of Fort Lauderdale, Florida, the wideout hails from widely renownde St. Thomas Aquinas high school.