Auburn Volleyball Falls on the Road to No. 20 Florida 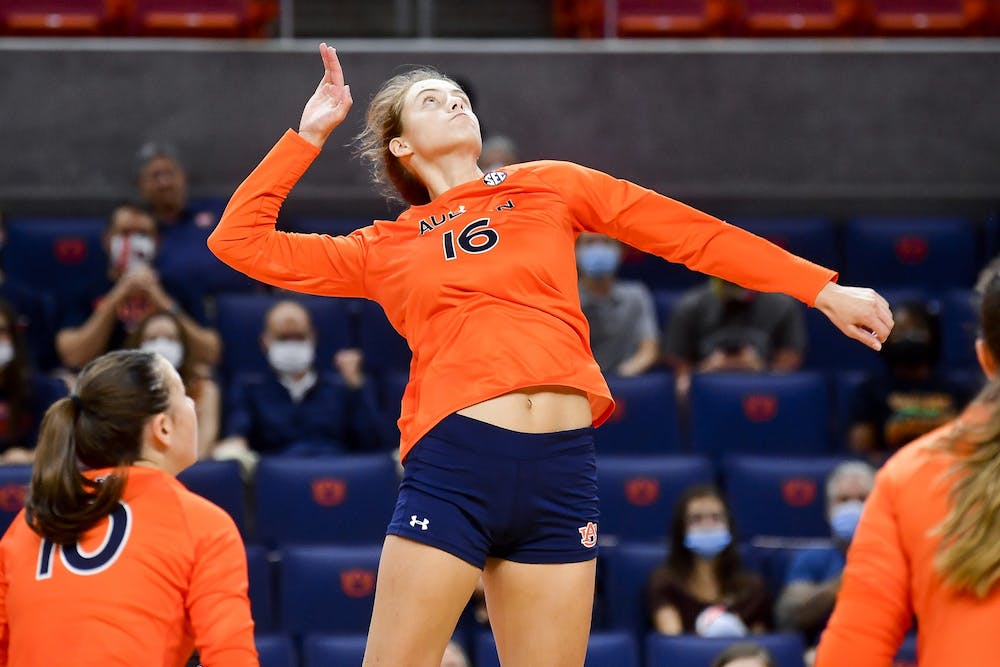 AUBURN, Ala. (EETV) - The Auburn Tigers traveled to Gainesville Florida to take on the No. 20 Florida Gators on Wednesday night.

Rebekka Rath led the team in kills with a total of 10 while adding a dig. With her performance, the junior is only seven kills shy of the Auburn single season record of 410.

Jackie Barrett led the squad in assists, dishing out 16 while also adding six digs. Freshman Kate Curtis added an assist of her own and four digs.

Liz Reich and Tatum Shipes both were active on offense, adding four and three digs respectively.

Bella Rosenthall led the team in digs with nine to bring her season total up to 456. The senior also added an assist to the team totals.

The set started off with a Florida ace before a service error gave possession to Auburn. The Gators then went on a 5-0 run to force an Auburn timeout. Auburn scored coming out from the timeout and the teams traded points to make the score 9-4 Florida. The Gators went on a 4-0 run with two kills from Lauren Forte before a Rath kill stopped the run for Auburn.

Rath and Forte traded kills putting the score at 14-6. The Gators went on on a 7-1 run before Auburn put up back-to-back kills to end the run at 21-9. Florida earned four of the next six points to win the set 25-11.

The Gators started off set two with back-to-back kills before Rath got a kill of her own and an Elif Yavuz ace tied the set at 2-2. Florida went up 4-2 before the squads split the next three points to make it 7-6. The Gators went on a 7-2 with kills from four different athletes to lead into the media timeout. The teams split the first four points coming out of the timeout to make the set 17-10 Gators. Florida then went on a 5-2 run to force an Auburn timeout with a score of 22-12. The teams split the remaining six points and Florida won the set 25-15.

Auburn opened up the third set by going up 2-0 for their first lead in the match, but Florida went on a 3-0 run to take the lead back. The Tigers battled back and go up 6-5 after a 3-0 run of their own. Florida followed that up with a 7-2 run with two kills from Forte to put the Gators up five. Another 4-1 run made the score 18-12 and force an Auburn timeout. Coming out of the timeout Auburn went on a 4-2 run, but it was too little too late as Florida finished out the set with a score of 25-19.

The Tigers will be back in action in Auburn Arena for the final time this weekend as they host No. 8 Kentucky in a two-match series. The first match is slated for Saturday at 4:30 p.m. CST while game two is Sunday at 1 p.m. CST.