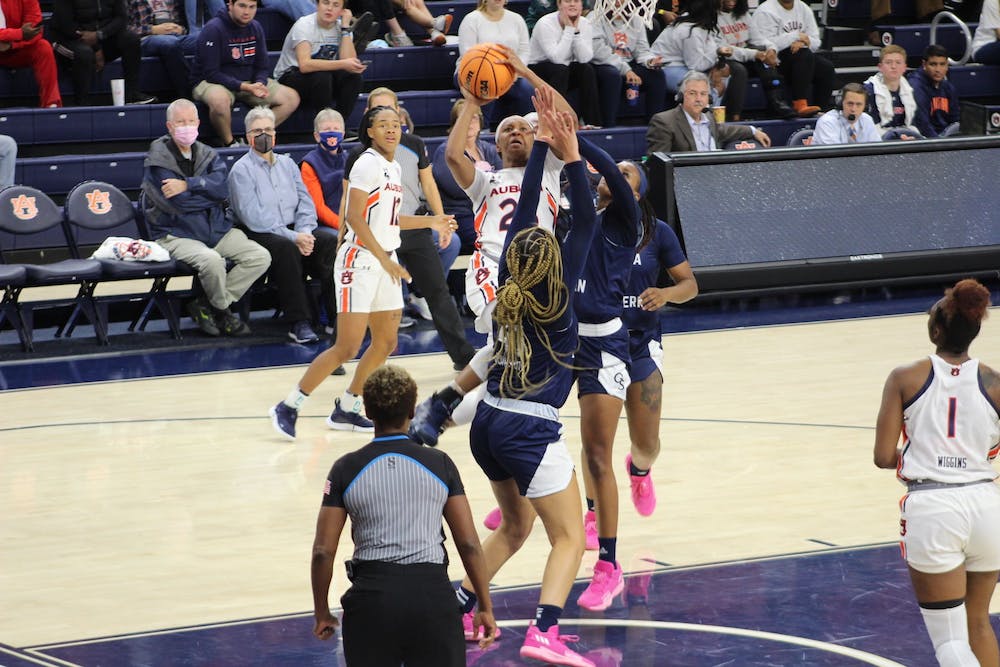 AUBURN, ALABAMA (EETV)After an offseason which lasted seemingly forever for fans of the Auburn women’s basketball program, the orange and blue faithful can finally say that the Johnnie Harris era has — officially — commenced. Tiger fans had taken advantage of the opportunity to see their team under new command during Tipoff at Toomers, the intersquad scrimmage and in the preseason scrimmage; Thursday night marked the official turning to the new chapter in Auburn history when coach J’s squad fell to Georgia Southern 68-66.

The opening period of the contest brought slow-paced and inconsistent play from both squads; both sides struggled to hold on to the ball and find the bottom of the bucket. Through the first ten minutes of regulation, Harris’ team posted just 19.7 percent from the field,  five turnovers and just nine points.

It was not until the second quarter that Auburn began establish what resembled an offensive identity. The Tigers began connecting from range with guards Annie Hughes, Amoura Graves and Sania Wells combining for four buckets from three-point land, forcing the Eagles to respect the squad from range, thus opening up scoring opportunities in the paint.

When Auburn returned to floor in the thrid quarter of play, the contest rapidly evolved into a back-and-forth sludgefest with neither team able to establish — or hold on to — a significant lead. The orange and blue had had a slew of opportunities but walked away with nothing to show as the team share a seemingly contagious inability to walk away with points at the charity stripe.

The squad's first-year heah coach was visably frustrated in her team's effort in the free throw category.

"I thought it was our focus," Harris said. "they shoot free throws every day, we make extra time for them to take free throws.

The Tigers did not push their game free throw makes to north of 50 percent until late in the fourth quarter of play.

Despite a struggle on both ends of the court, there was a bright spot for the orange and blue: an exceptional display from juinor guard Sania Wells. After posting 8 points in the first 20 minutes of game time, the Moss Point, Mississippi native proved worth the price of admission in the second half, posting and additional 11 points, bringing her evening total to 19.

"Sania, she's been working hard," Harris said. "She's going to be rusty a little bit because she's been out a bit with a concussion.. .but i thought she came out with her hair on fire."

Unfortunately for coach J and company, Wells' outstanding evening was not enough to will the Tigers to victory as the orange and blue ultimately found themselves in foul trouble late and  — ultimately — outscored 68-66.

The inagural regular season game has now come and gone for coach Harris and the rest of the Auburn Tigers; the group will now shift its focus on taking care of business against its next opponent: the Monarchs of Old Dominion. Auburn will travel to Norfolk to take on a familliar foe of years past on Nov. 14. Tipoff is scheduled for 1:00 p.m. CT on ESPN+.