Tigers fall in 2OT showdown in The Battle 4 Atlantis 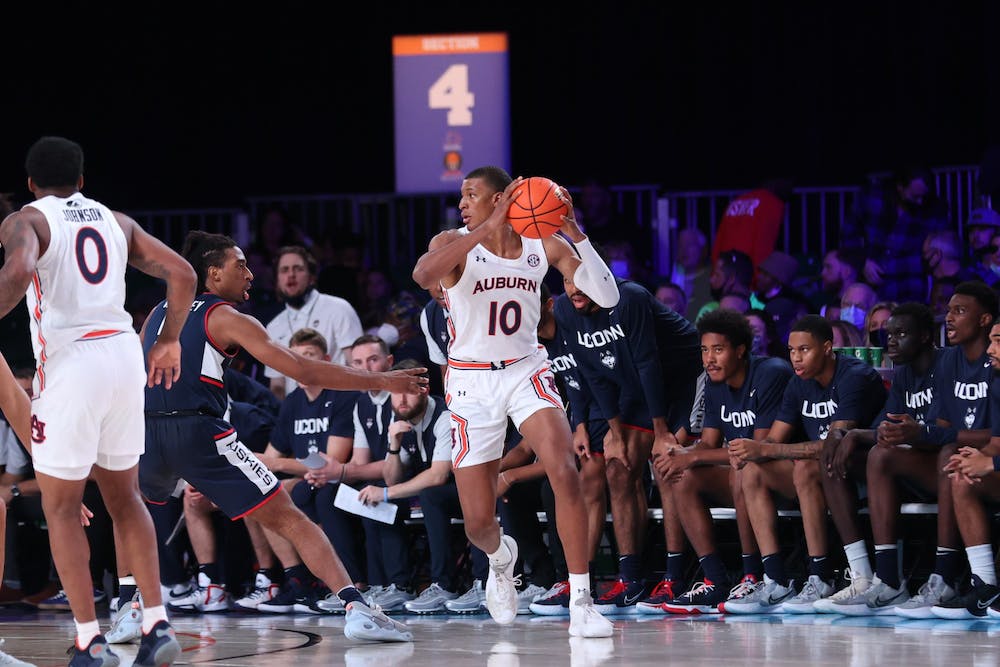 AUBURN, Ala. (EETV) - The Auburn Tigers kicked off their business trip in Paradise Island, Bahamas with a double-overtime loss against No. 22 UConn on Wednesday. With the loss, Auburn moves to 3-1 on the season.

“We competed. We came here to win. We’re disappointed. I thought we played with great effort and energy, fairly decent level of toughness” said head coach Bruce Pearl after the double-overtime loss. “Our program has always been best when everybody contributes and I need a few more guys that I know can contribute.”

UConn dominated most of the game before Auburn mounted a 15 point comeback with 8:40 remaining in the second half to force overtime.

UConn started off the game by playing physical in the paint. Adama Sanogo scored the first 10 points for the Huskies dominating Walker Kessler under the basket. The Huskies then turned to what they do best, shooting the three-ball. The Huskies shot an impressive 8-for-12 from beyond the arc with Jordan Hawkins going a perfect 3-for-3. The Huskies shot 59% from the field in the first half while Auburn only shot 37%.

Sanogo was the difference-maker for the Huskies, the forward scored a career-high 30 points en route to the UConn win.

KD Johnson was the hero for Auburn. The Sophomore led the team in both points and steals with 27 and five respectively. Johnson didn’t only put up big numbers but he put them up when it counted. Johnson scored the game-tying layup in regulation and in overtime to force the second overtime period.

“I’m just trying to do anything to get a W you know I won’t really focus on anything going on I just try to get a win," K.D. Johnson said when asked about his play in the clutch.

Jabari Smith showed growth in the game. The freshman playing in just his fourth collegiate game and first against real competition started off the game slow. He shot a lackluster 1-6 in the first half and had gotten himself into foul trouble with 3 fouls to his name. Smith finished the night with 22 points and went a perfect 12-12 at the charity stripe. Down four with 0:20 left in 2OT, the Tigers trusted him to take the shot to make it a one-possession game.

The Huskies pulled away in the second overtime period going on a 9-0 run. The Tigers would claw back to make it a four-point game with possession but couldn’t finish the miracle comeback in paradise.

The Tigers will look to bounce back as they face off against Loyola Chicago in game five of the Battle 4 Atlantis. Loyola lost to Michigan State 63-61 thanks to a dunk with 3.4 seconds remaining. The game will take place at 1:30 p.m CST on Thanksgiving day and is set to air on ESPN 2.