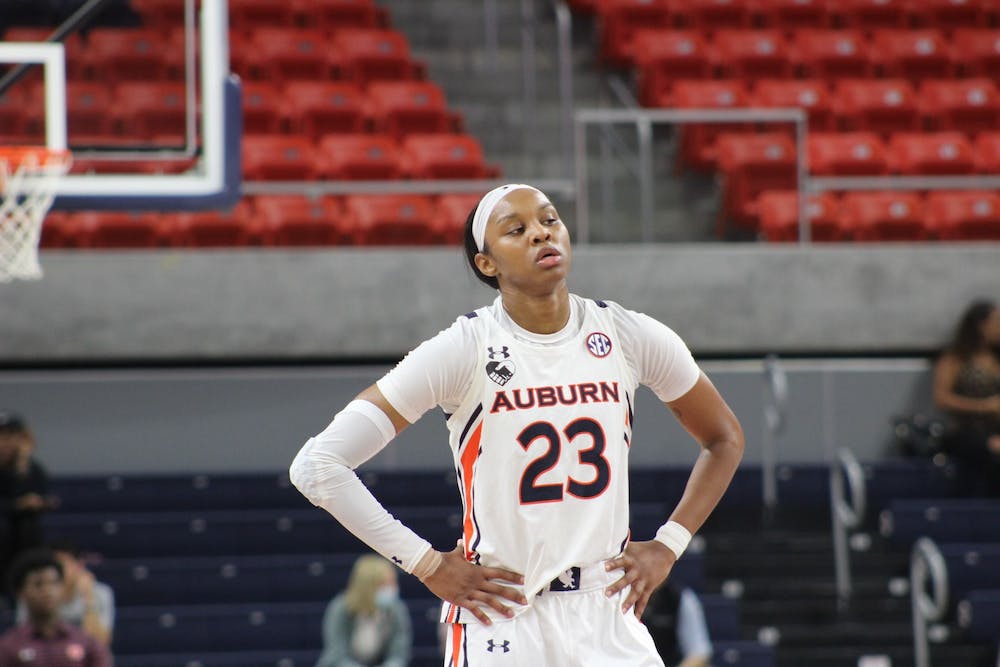 AUBURN, ALABAMA (EETV) When coach Johnnie Harris and the rest of the Tigers returned to Auburn Arena on Tuesday night, the squad sought to snap its season-opening 2-game losing streak with a victory over the Hornets of Alabama State; not only were the orange and blue able to do so, the Tigers ended their drought in convincing fashion, defeating their in-state foes 74-45.

From the opening tip of the contest, Auburn asserted that it had come to play and junior guard Honesty Scott-Grayson made her presence known immediately. The Brick, New Jersey native wasted no time in getting to work, posting nine of her team’s 19 points and a pair of rebounds in the first quarter alone.

Her new head coach was pleased with her efforts.

"Honesty, she's a guard that can score at all three levels," Harris said. "In our system — the way we — play that's very valuable...she's been in the gym on her own and all of those things are paying off."

In terms of offensive production, the second period of play proved to be more of the same from Auburn as Harris’ squad continued to score seemingly at will. Auburn posted an additional 16 points, behind continual production from Scott-Grayson and senior forward Kiyae’ White.

"We wanted to come out and impsoe our will on this team," Harris said. "I thought we started out doing that."

Despite the offensive fireworks in the early going, the Tigers struggled to keep their opponents at bay on the opposite end of the court, allowing the Hornets to surge back to within 10 when the foes headed to the locker room at halftime.

"It just seemed like all my starters got tired at the same time and asked for a sub," Harris said. "We were with some bench players and we turned the ball over against their press late in the second quarter and they made on a little run."

In the third period of play, both teams worked to execute their respective halftime adjustments as the Tigers and Hornets took turns trading possesions and points with neither able to formulate a consistent run or establish what might resemble a rhythm; however, for fans of the orange and blue, Scott-Grayson did not allow for ASU's defensive adjustments to limit her role.

The standout guard posted an additional 10 points in the final 20 minutes of play, bringing her total to 21 points, 3 assists and 10 rebounds on the evening.

The standout junior accredited her role in the game to the hard work of her teammates and coaches.

It was not until the fourth quarter that Auburn was able ot pull away to a commanding lead despite the fouling out of juniors Sania Wells and Jala Jordan. Harris acccredits her squad's taking control of the contest to its ability to finally play a complete game on both ends of the court.

"It was good to see them finish," Harris said. "We've been talking a lot about finishing. Finishing our play, finishing a layup, finishing a game. To see them come out in the fourth quarter and execute was good for us."

Coach Harris has now logged her first official win at the healm of the women's basketball program on the Plains; she can now redirect her team's focus soley upon building on the victory and preparing for its toughest task on the young season: taking down the No. 18 Georgia Tech Yellow Jackets on the road. The game will take place at McCamish Pavillion at 3:00 p.m. CST.