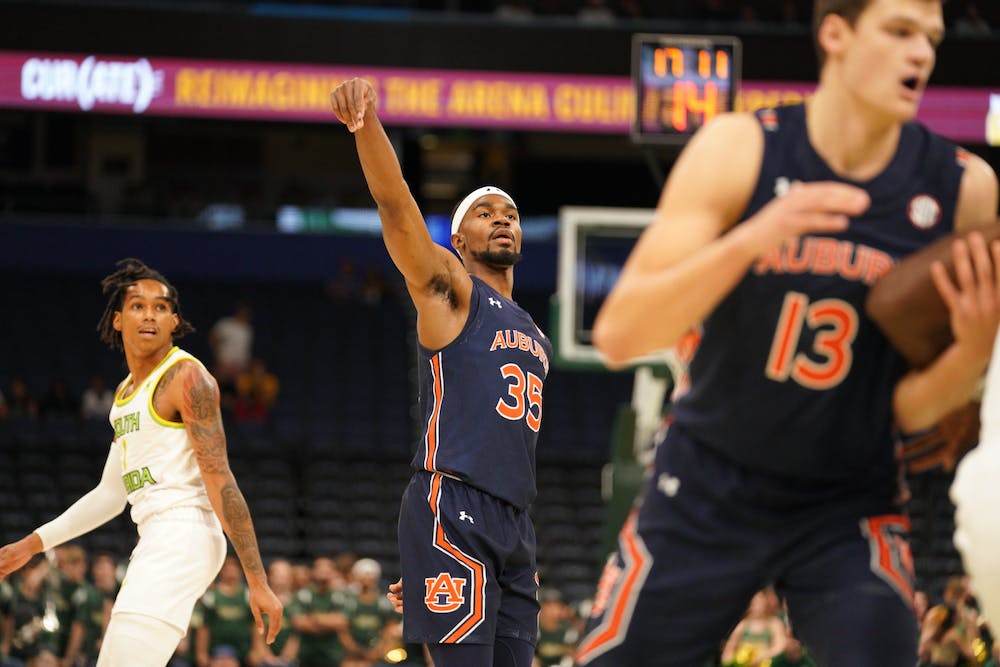 Devin Cambridge during the Auburn Mens Basketball game against the USF Bulls at the Amalie Arena on November 19, 2021. (Stephen Galvin/Auburn Athletics)

AUBURN, Ala. (EETV) - The Auburn Tigers Men’s Basketball team is set to compete in the tenth annual Bad Boy Mowers Battle 4 Atlantis over the Thanksgiving holiday. The three-day competition is one of the premier and most challenging early-season tournaments.

This season the field is loaded. There are multiple former final four teams, the defending national champions and some of the best coaches in the game.

The Ramblers are coming into this season a new basketball team under the leadership of first-year head coach Drew Valentine. They play an up-tempo style of ball and it shows in the box score, the team has scored at least 80 points in every game this season and started the year off with a 103-45 win against Coppin State. The team lost some big names on defense but returned Aher Uguak. Uguak was named on the all-defensive team last season and has done his best to fill the shoes of Cam Krutwig.

Tom Izzo leads Michigan State into the tournament with a 3-1 record, but do not let that loss fool you the Spartans are a tough physical team. They average eight blocks a game which is good for fifth in the country and are the third best rebounding team averaging 45.3 a game. The problem for Michigan State this year has been turnovers, the Spartans turn the ball over 20.4% of the time. They will need to keep turnovers to a minimum if they look to advance past Loyola Chicago.

Tip off is scheduled for 11 a.m. CST on Wednesday, Nov. 24. The game will be broadcast on ESPN.

On paper, this matchup is about as close as they come. The Huskies offense ranks 31st in the country while Auburn is right behind them ranking 32nd, but both teams are getting their points in different ways.

UConn is shooting 39.3% from beyond the arc. The team is led by Tyrese Martin and Akok Akok each shooting 71.4% from three. On the other side, Auburn has struggled to shoot the three ball to open up the season, shooting 29.3% as a team.

Auburn is led by the highest-ranked freshman in the tournament, Jabari Smith. Smith was the number four recruit in the country and through his first three games has averaged 16 points per game.

On the defensive side of the ball, the Tigers have held opponents from just 28.6% from three, while on the inside Auburn averages eight blocks a game which ranks fifth in the country. The Huskies boast a 30.2% turnover rate alongside seven blocks a game. Expect a low-scoring defensive slugfest, UConn will try to force the Tigers outside and settle for long shots while Auburn will try to lock up Martin and Akok to limit the Huskies’ shots.

VCU has started the season off with some of the best defensive numbers from around the league which include a game in which they only allowed 37 points against Vanderbilt. VCU has not shot the ball well, ranking 353rd in points per game. The team has not scored more than 54 points in a game this season

Syracuse has not allowed many points either thanks to Jim Boeheim’s 2-3 zone. The Boeheim brothers handle most of the scoring for the Orange. Buddy Boeheim shoots 40% from three on his career and will look to shoot the ball whenever he gets a chance.

Expect a low-scoring affair, VCU will need to lockdown Boeheim in order to even have a chance against the Orange.

Tip off is scheduled for 4 p.m. CST on Wednesday, Nov. 24. The game will be broadcast on ESPN2.

The Sun Devils come into the game 2-2 with losses to UC Riverdale and San Diego State. They appear to be outmatched by the high-power offense of the defending national champs.

The Bears are led by sophomore LJ Cryer. Cryer does not start but averages 24.8 minutes a game which puts him at second among the Bears. The guard leads the team in points averaging 18.5 a night and has shot 53.8% from beyond the arc.

Baylor has yet to be tested this season and could get caught looking ahead. The Sun Devils are a team that seems to always play to the level of their competition and could give the Bears some trouble.

If the Tigers win on Wednesday they will be taking on the winner of game one at 11 a.m. CST on Thanksgiving day, with a loss they will match up against the loser of game one at 1:30 p.m CST. Auburn will also play on Friday in a game with an opponent and a time to be set following the Thursday games.