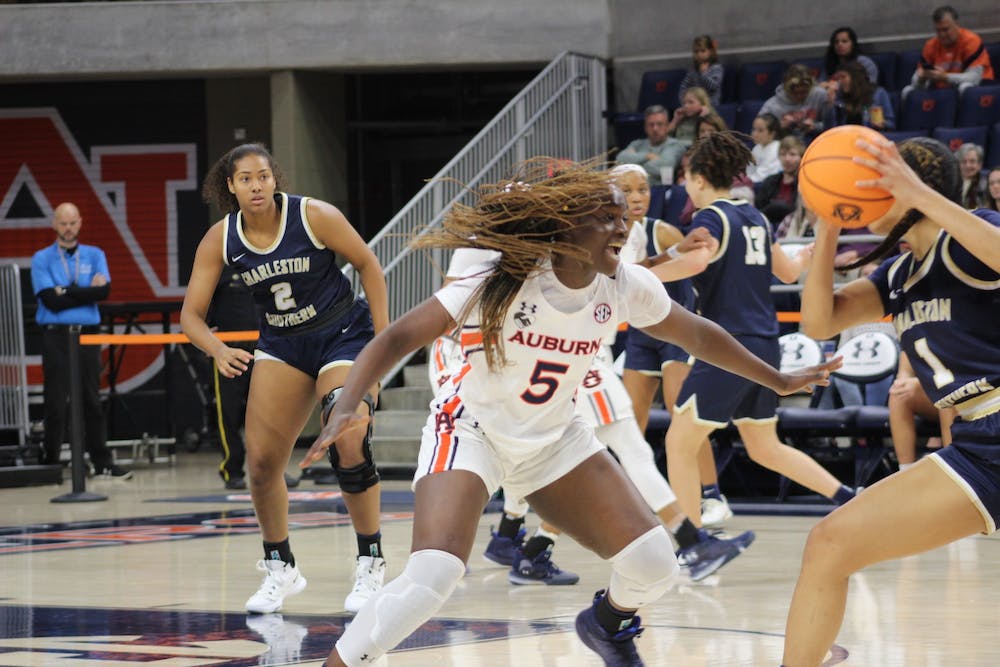 AUBURN, ALABAMA (EETV) The past week has been a bit of a roller coaster for coach Johnnie Harris and the Auburn women’s basketball program. The Tigers pulled off a remarkable upset over No. 18 Georgia Tech on Sunday only to turn around and fall to unranked Little Rock on Wednesday; the squad needed an emphatic win to make the holiday week worth remembering. Friday’s (SCORE) victory over Charleston Southern was just what the doctor ordered.

Unlike what fans of the Tigers have grown accustomed to in 2021, Harris’ squad came out of the gates hot, jumping out soundly ahead of its opponent, locking down the Buccaneers on the other end of the court and keeping their foot on the gas for the entire first 20 minutes of play.

"We wanted to start out imposing our will," Harri said. "We wanted to come out and imose our will we wanted to be tough and physical and i thought we did that...really pleased with that."

The orange and blue lead Charleston Southern 28-5 after just 10 minutes of play thanks — in large — to a 10-point effort from sophomore guard Aicha Coulibaly. The Mali native’s outstanding performance was not limited to the first period, however. Coulibaly was a problem for the Buccaneer defense for the entirety of the first half, posting 17 total points in the Tigers' construction of a 51-19 lead going into the locker room.

"Aicha's ceiling is so high," Harris said. "She's athletic, shes really really agressive; sometimes she gets moving too fast...she did get us off to a good start."

To the pleasure of the Auburn faithful, Harris’ squad kept their foot on the accelerator as the contest rolled into the second half. The Tiger defense held the Bucs to just six points in the third period of play while simultaneously posting an additional 23 of their own.

Coulibaly continued to be a dominant factor on both ends of the court; however the story of the second half was that of junior guard Annie Hughes. After quietly posting 10 points in the early going, the third-year Tiger stepped into the spotlight by knocking down a trio of threes in the third period, setting a new career high in perimeter shots made and posting an additional 11 points.

"I was really happy," Harris said. "But I've seeen her in practice and  — even though shes been missing lately — I'm not scared to go to her. She knows she has the green light."

Behind the efforts of Hughes and Coulibaly, Auburn found itself ahead of Charleston Southern by a score of 74-25 entering the game’s final 10 minutes; the Tigers finished out the contest with little help from their starting rotation, giving minutes to Harris’ bench and closing out the Buccaneers by a score of 91-42.

The orange and blue has returned to the win column and can continue to build upon their reacquired momentum thus when the Tigers play host to the University of North Florida on Tuesday, Nov. 30. Tipoff between the Tigers and the Ospreys is set for 7:00 p.m. CST on ESPN+.