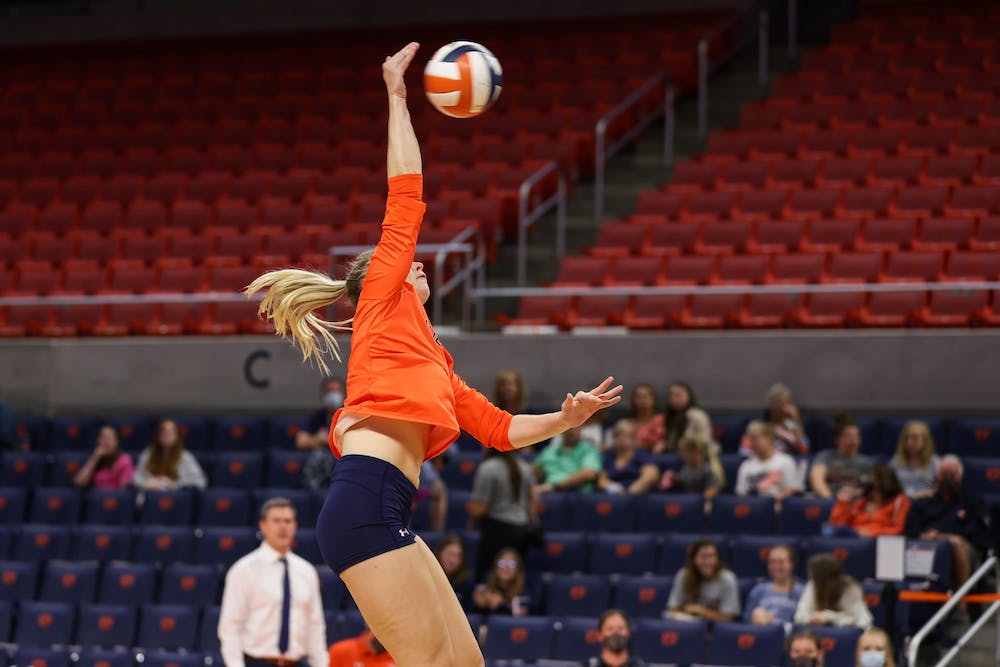 Auburn, Ala. (EETV)- Auburn volleyball was swept in straight sets by Kentucky in Auburn Arena on Saturday. With the loss, Auburn falls to 13-13 on the season and 5-11 in conference play.

Even through a hard loss, the Auburn Tigers walked out with history being made. Rebekah Rath, a junior at Auburn crushed the programs single season record in the third set, by completing a total of 414 kills by the end of the season. In this game she totaled 10 kills for her 22nd double digit performance of the year. After tonight, Rath exceeded Jessica Glover’s (2008) programs rally-scoring record.

The rest of the offense was being carried by the senior class, Liz Reich (graduate student), Val Green, Elif Yavuz, and Tatum Shipes. Reich contributed for the Tigers with six kills, two digs, and two blocks. Green added three kills, a dig, and a pair of blocks. Yavuz had two kills, an assist, and a dig. Then Shipes helped with three out of the four total team blocks, while also having three kills.

Shipes has killed the season with now holding a record of 116 block assists, which is the same to Jaunelle Hamilton (2000).

The sophomore starting setter, Jackie Barrett, came out with 18 assists, one block and 12 digs. This gave the Tigers the lead in the 16th double-double of the season.

On the other end, Bella Rosenthall defensive senior, added 15 digs for the Tigers. This led to Rosenthall having a total of 471 digs in the season, which is the fifth most in a single season of Auburn’s history in the rally-scoring era. After tonight, Rosenthall’s volleyball career is totaled out to 1,187 digs, bringing her to pass Rachel Shanks (2004-2007) for eight in Auburn’s history.

In the first set, Auburn had a slow start, but Reich carried with a total of three kills on a .400 hit percentage. Along with Reich, Rath had three kills in the opening stanza, but the Wildcats came in with a .333 attacking clip. This led the Tigers to the net six times having the Wildcats win the first set 25-13.

Going into the second set the Wildcats came in hot with an early score of 8-2. Auburn’s offense came in with another three kills from Rath and a two-kill performance from Yavuz and Shipes. Kentucky’s defense didn’t come to play and had another victory of 25-10.

Coming into the last set, the Tigers came in with their best offense and opened with a score of 7-2 from Reich’s three kills and a block assist. After a timeout, Rath hit the record-breaking kill which set the Tigers up 14-13. The Wildcats swept in and took the end victory of 25-20

Through this loss, Auburn is not giving up and meeting with Kentucky for a rematch on Sunday at 1 p.m. CT on SEC Network +.