Another Slow Start, Another Come Back Win for Auburn 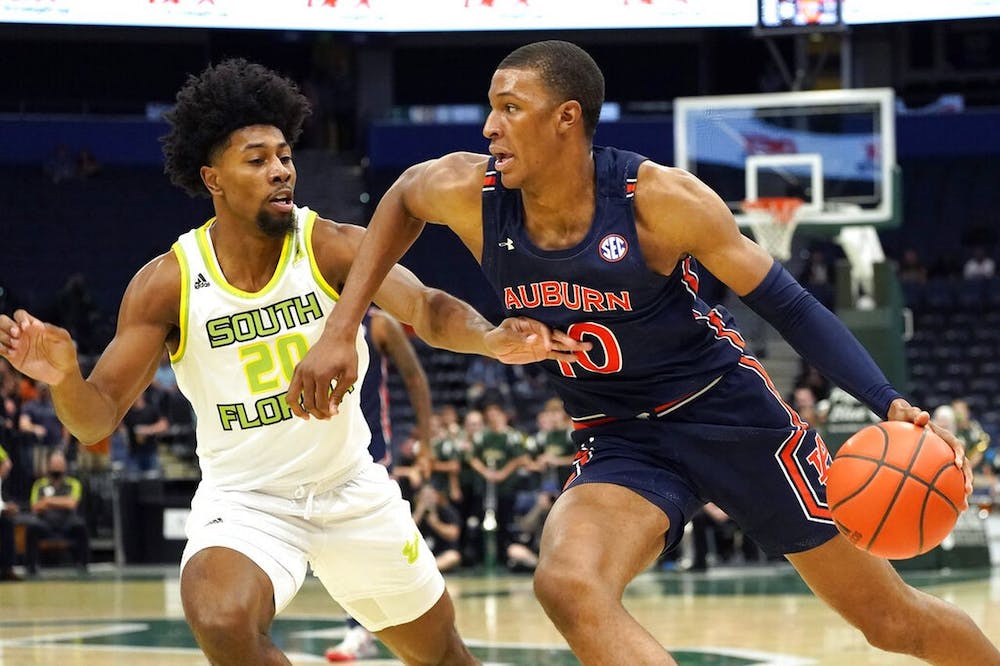 Sophomore K.D. Johnson made the first bucket for the Tigers at the 14:43 mark in the first half to cut the Bulls' lead 9-3. However, South Florida went on another big run to put them up 15 points with under five minutes remaining. When the halftime buzzer went off, Auburn shot 16% of their 3-pointers and were 9-for-29 in field goals.

The second half was dominated by Auburn as dunks by Jaylin Williams and Devan Cambridge served as momentum plays to start the Tiger comeback. Wendell Green Jr. passed the ball to his teammates on two different posessions to reduce the gap 40-35. K.D. Johnson hit back-to-back layups to force a USF timeout as the Tigers go on their own 15-0 run.

"It was just energy," Johnson said. "That's all we needed---just someone to come out with good energy and be physical and get down and do the dirty work. "

Johnson produced 15 out of 25 bench points and went 4-for-9 from the field and made five of his eight free throws.

A 3-pointer from standout freshman Jabari Smith gave Auburn its first lead of the game with just under 10 minutes left in the game. Smith ended the game with 10 rebounds, nine points and a steal. Teammate Zep Jasper was the only other Tiger to hit double digit points with most of them coming in the final minutes of the game. A corner three ball expanded the lead 55-47 and a pair of free throws helped seal the Tiger win.

"There may have been 1,000 folks in there-- we had half of them," head coach Bruce Pearl said about the environment. "We don't get the win without them. We held South Florida to 18 in the second half."

The Tigers start the season 3-0 for the fifth time under Pearl. Their next game will be against No. 23 UConn on Wednesday, Nov. 24 at 1:30 p.m. CT in the Battle 4 Atlantis tournament. The tournament celebrates its 10th year anniversary and includes eight teams from all different conferences. The championship game is set for Nov. 26 at 10 a.m. CT and will be broadcasted on ESPN and can be streamed on the ESPN app.