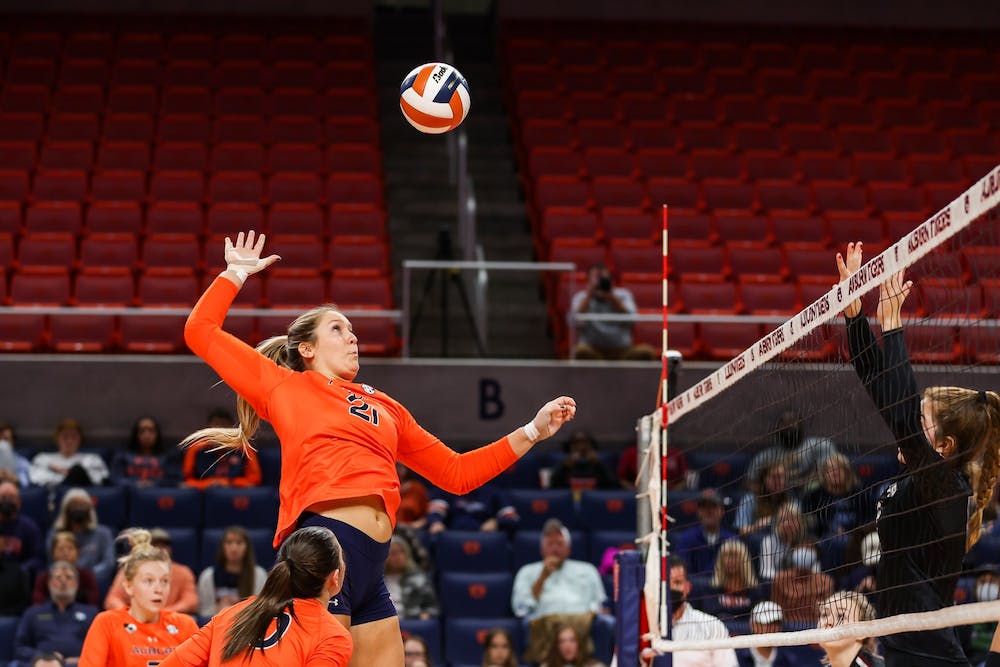 Rebekah Rath led the Tigers in kills with 10 while adding a pair of digs and one block. Rath is now just 17 kills shy of setting the program's single-season record. Senior Val Green chipped in an additional eight kills of her own.

Bella Rosenthall led the team in digs with 13. This pushes her season total to 447 which is the seventh most by an Auburn player in a single season. The freshman duo of Fallan Lanham and Kate Curtis each picked up eight digs of their own.

Sophomore Jackie Barrett tossed up 12 assists while adding five digs, one block and a kill. Freshman Jordan Sinness entered the match during the third set and totaled 12 assists and a dig in her lone set.

After splitting the first four points, Auburn went on a 5-0 run with kills from Rath and Shipes and a service ace from Kate Curtis. The squads went back and forth before South Carolina went on a 6-0 run to take the lead for the first time since the opening serve. The squads would go back and forth in small runs until the teams were tied at 19. South Carolina would put a three-point run together to pull ahead. The Tigers made a last-second effort on the Gamecocks matchpoint but it was too little too late as South Carolina took the set 25-23.

South Carolina dominated the second set from start to finish. The Gamecocks started the set on a 6-0 run that included two aces from Mallory Dixon and two kills from Riley Whitesides. Auburn showed signs of life after a 5-1 run to push the score to 8-13. The Gamecocks finished the set on a 12-5 run to win the set 25-13. The set was highlighted by five aces by South Carolina that helped them secure the set.

South Carolina started the set on a 3-1 run. Auburn was able to put together several small runs and tied the game at 11-all thanks to back-to-back kills from Rath. The teams went back andn forth before the Gamecocks went on a 3-0 run to push the score to 18-14. With a kill from Shipes Auburn was able to get back to 19-17 before the teams went back and forth until the Gamecocks won the set and match 25-22

Auburn will be back in action next Wednesday, Nov. 17 at No. 22 Florida. First serve on SEC Network+ is set for 6 p.m. CT