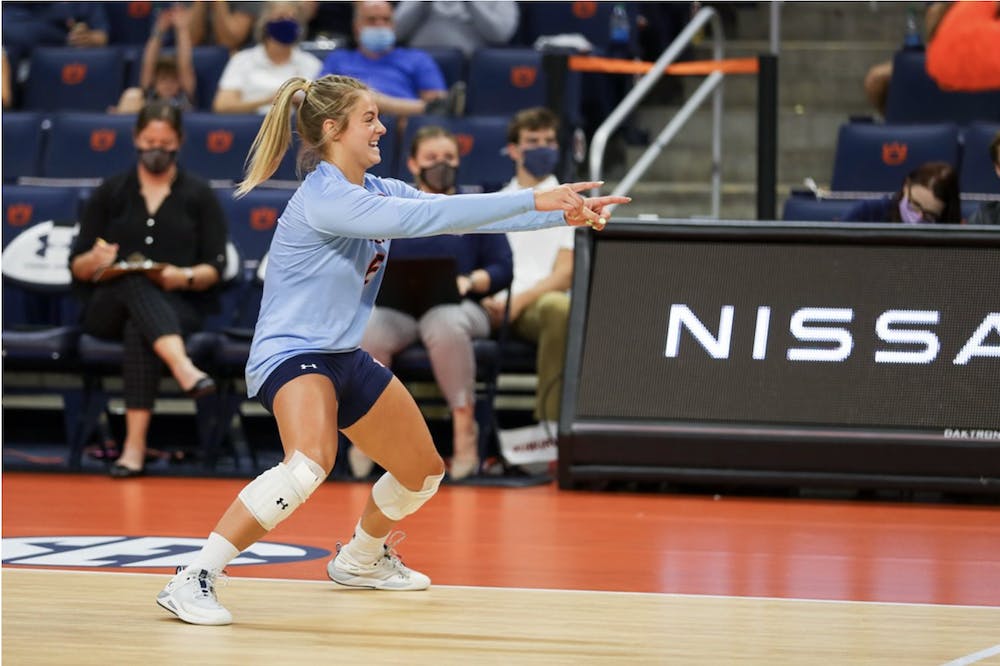 The Auburn Volleyball team (13-10) has made great strides under second-year head coach Brent Crouch. Much of the team's accomplishments thus far in the season would not have been possible without the efforts of senior defensive specialist and libero, Bella Rosenthall.

Q: Auburn volleyball is 12-9 this season—your best season at Auburn—what do you think has helped the team reach these goals?

"I think we train really hard and are really mindful when we train too. Brent and the coaching staff do a really good job at teaching. They are really good coaches, and they know the game of volleyball really well. In practice, they really try to teach us all the fundamentals and to get things right. If something we do isn’t right then we have to do it over again and again, and that really helps us try to practice perfectly. Because if we practice perfect, then those things are gonna lead into games and they lead to wins as it has been shown this year."

Q: Last year Covid threw a wrench in everyone’s plan, and it seemed more like a base year of trying things out and implementing Coach Crouch's system.  Do you feel more comfortable with his system in year two? More specifically, how do you fit into the system?

"I guess in our COVID year it was hard to learn. We had to switch over to his teaching style and learn what he wanted us to do and how he wanted us to perform. I think he also recruited people who already had really good tendencies of what he likes to teach, but the newcomers have come in and performed really well and adopted his type of learning style. He’s a really good teacher and really big on fundamentals, defense and blocking. I think we have done a really good job at that."

Q: You guys are through more than three-quarters of the season. What are the things that you know that you are doing well as a team? And what are things you can improve on as a team prior to heading into the final stages of the season?

"I think we have done a good job at blocking and just being a really scrappy team, and also making sure balls aren’t hitting the floor. We practice that a lot in practice. Another thing I think we do really well is serving really tough, trying to strategize on who to serve, and what types of serve to use. We have developed really well at that these past couple of weeks. Other things that we always talk about that we need to get better at is just first ball contact and making sure we can make a good pass out of the server receive. Also, really getting the ball up to the net because it makes it way easier for the setters to connect with hitters which leads to us getting points."

Q: How have your first few years on campus helped you become the player you are today?

"From my time at Auburn, I have learned to become a leader, a really good leader, and I take pride in that because I feel like I can talk with my teammates and my coaches. I think communication on the team is really important, so I would say regardless of skill that has been a really big thing I learned here.

Q: This season has been really good for you. You have already hit 1000 digs in your Auburn career, a huge accomplishment. As the season nears the end, how do you envision the season finishing?

"My mindset and (Coach) Brent’s mindset is that anyone is beatable, and I have a few more games left in my college career, so I keep that in the forefront of my mind. I want to win as many games as possible that we have left in the season. Hopefully, that may lead to a postseason route, which would be awesome.  If we come out every single night and do what do we’re supposed to do and have good practices, then I think the rest of the season is going to be really good."

Auburn Volleyball continues its season with a match against the South Carolina Gamecocks (13-11) Wednesday, November 10, at 8 p.m. ET. The broadcast can be seen on the SEC Network.