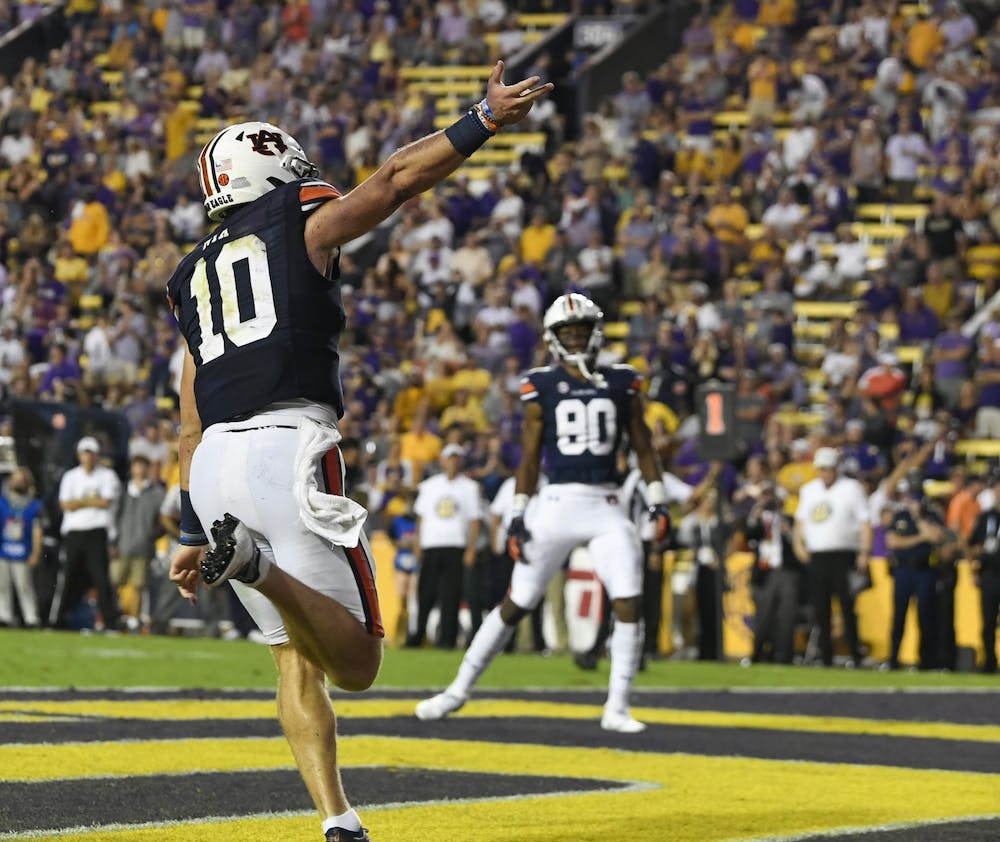 LSU scored on its first three drives of the game, beginning with a 31-yard touchdown pass from Max Johnson to Kayshon Boutte. After two field goals from Cade York, LSU took a 13-0 lead midway through the second quarter.

Auburn’s offense came alive late in the first half when Bo Nix avoided multiple tackles on fourth down to find Tyler Fromm on a 24-yard touchdown pass.

“We’ve been repping that play for a while,” Nix said. “I just remember running back to the left just trying to
maybe do something. I made that last guy miss and I knew obviously everybody was about to be there and pretty much tackle me. I saw Tyler Fromm running in the back. I mean, crazy. I’ll never forget the vision I had. I just saw that hair coming out of the back of his helmet, just flopping wide open”

Anders Carlson later made a 49-yard field goal with 14 seconds left in the first half to make it 13-10 LSU at halftime.

LSU’s offense drove into Auburn’s territory on back-to-back possessions in the third quarter, but Auburn’s defense held LSU to a field goal on both occasions.

Entering the 4th quarter down 19-10, Auburn capped off a nine play, 75-yard drive on a 5-yard touchdown run by Nix.

Both teams traded punts on five straight possessions until Auburn began with the ball on its own 8-yard line with 7:06 left in the game. Auburn proceeded to drive 92 yards on 11 plays to take a 24-19 lead on a 1- yard touchdown run by Jarquez Hunter. Hunter also had a 44-yard rush on an outside toss play earlier in the drive.

Auburn’s defense sealed the win when Bydarrius Knighten intercepted Johnson on fourth down with 1:09 left in the game.

Auburn Head Coach Bryan Harsin was proud of how Auburn finished the game.

“There’s obviously a lot of history with this game and being here,” said Harsin. “But the most important thing tonight was what we had to do with this team in order to be successful and find a way to win and those guys did that and we finished, which I’m proud of our team for that. I thought guys stepped up and made some really great plays tonight."

Auburn improves to 4-1 on the season after the win, while LSU falls to 2-2. Auburn will look to continue its momentum next weekend when it takes on No. 2 Georgia at home next Saturday in the Deep South’s Oldest Rivalry.