No. 18 Auburn’s offensive struggles plague team in loss to no. 2 Georgia 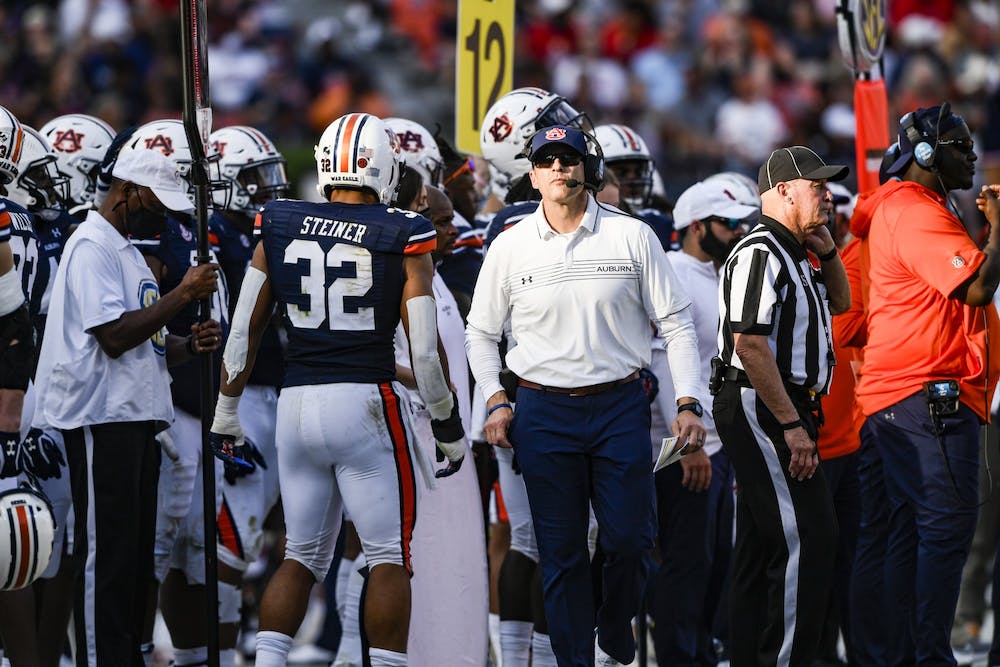 AUBURN, Ala. (EETV) — In the 126th showdown of the Deep South’s Oldest Rivalry, the no. 18 Auburn Tigers fell 34-10 to the no. 2 Georgia Bulldogs in Jordan-Hare Stadium. Early failed scoring opportunities and unfinished drives defined Auburn’s momentum from the first possession.

Despite putting the first points on the board after a 17-play opening drive, the Tigers’ field goal from Anders Carlson remained their only score until just over four minutes left in the third quarter. After a six-play, 78-yard drive, sophomore Tank Bigsby found the end zone on a six-yard rush, responding to the Dawgs’ 24 points scored since Auburn’s first field goal.

Georgia added another field goal and touchdown to their total before running away with the 34-10 win.

“Georgia’s a very good team. I think they’ve proven throughout the season why they’re in the position they’re in,” head coach Bryan Harsin said.

Offensive woes coupled with the Dawgs’ defense plagued the Tigers throughout the game.

The Bulldogs’ no. 1 nationally ranked defense stifled the Tigers’ ground game, holding Auburn to a mere 46 yards rushing. Bigsby led the Tigers in rushing, going 28 for 10. Freshman Jarquez Hunter followed behind with 18 yards over 5 carries. Shaun Shivers rounded out the Auburn running backs, totaling 16 yards in his four carries.

In his 30th consecutive start at quarterback, junior Bo Nix went 21 for 28, totaling 217 yards with one interception—his first pick of the year.

In the air, Demetris Robertson had 59 receiving yards over four catches, despite being targeted 10 times. Kobe Hudson’s 50 yards were second on the team, and Bigsby’s 22 ranked third.

Next Saturday, the Tigers (4-2, 1-1) will travel to Fayetteville to take on the Arkansas Razorbacks in their third SEC matchup of the season. Kickoff is set for 11 a.m. CT.