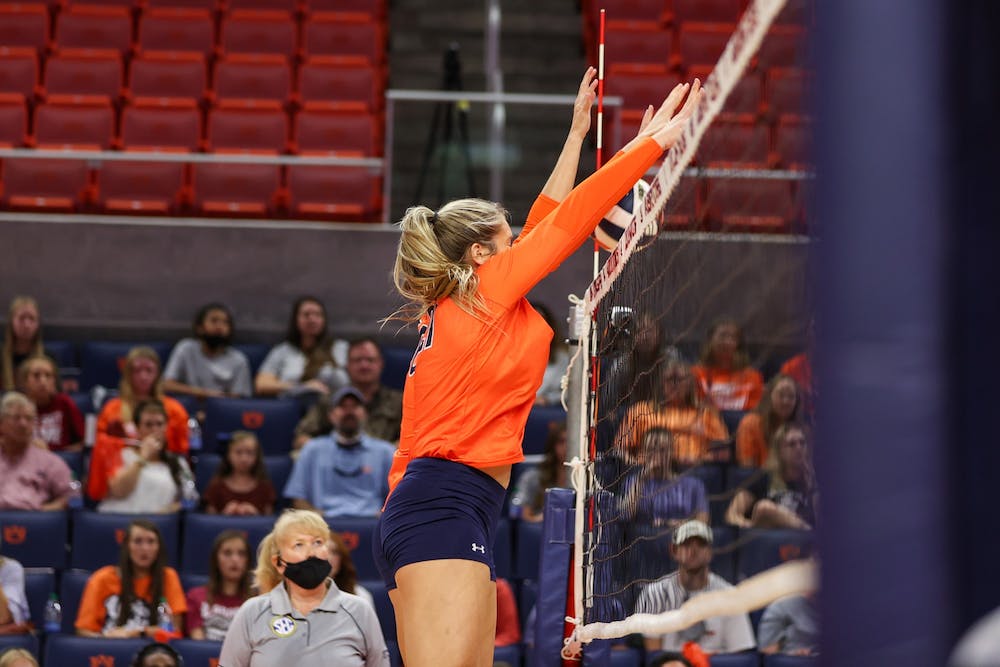 AUBURN, Ala. (EETV) - After splitting the series against Missouri, Auburn volleyball (11-7, 3-4 SEC) moves their focus to rivals Georgia (5-12, 1-5 SEC) in a two-match series in Athens at Stegeman Coliseum.

Due to expected widespread internet outages on campus, the two-match series was moved to Thursday-Friday. First serve for both matches is scheduled for 6 p.m. CT. Kaleb Frady and Nikki Chester will have the call on SEC Network+.

"Georgia is a very well coached team by Tom Black," said Auburn head coach Brent Crouch. “Georgia is a very good serving team, which puts pressure on us in receiving those serves. They run a fast offense like Arkansas, Missouri and Ole Miss. That will be a good challenge from a blocking standpoint."

After recording nine blocks in the series against Missouri, Tatum Shipes now stands second in program single-season history. Shipes 104 total blocks is just 14 shy of Camila Jersonsky's single season record of 119, which was set in 2012.

The senior comes into the weekend leading the SEC in both blocks (104) and blocks per set (1.61). Shipes is ranked second nationally in total blocks, while her blocks per set average is enough to cement her in fourth.

The Georgia Bulldogs are looking to turn things around following back-to-back losses to #21 Tennessee, 3-1, and to Texas A&M in a five-set thriller. Georgia's lobe conference victory this season came via a sweep at Texas A&M. The Bulldogs come into the match with a 1-5 record in conference play while standing at 5-12 overall.

Georgia averages 12.19 kills per set this season, while attacking on a .219 team hitting percentage. The Bulldogs effectively spread the offense around having four players with over 100 kills.

Junior Amber Stivrins has done most of the damage with 194 kills to her credit. She stands 17th in the league with a 2.94 kills per set mark. Stivrins also leads a strong Georiga serving attack with 28 aces to her name, the third in the SEC.

Defensively, the Bulldogs are once again spread evenly on the court with five players with at least 100 digs this season. Redshirt senior Claire Rothenberger and sophomore Mallory Downing lead the team with 141 digs each. Downing holds a team-high 2.47 digs per set average

The Tigers return to Auburn Arena on Friday, Oct. 29 to face off against LSU. First serve is slated for 6 p.m. CT on the SEC Network+.