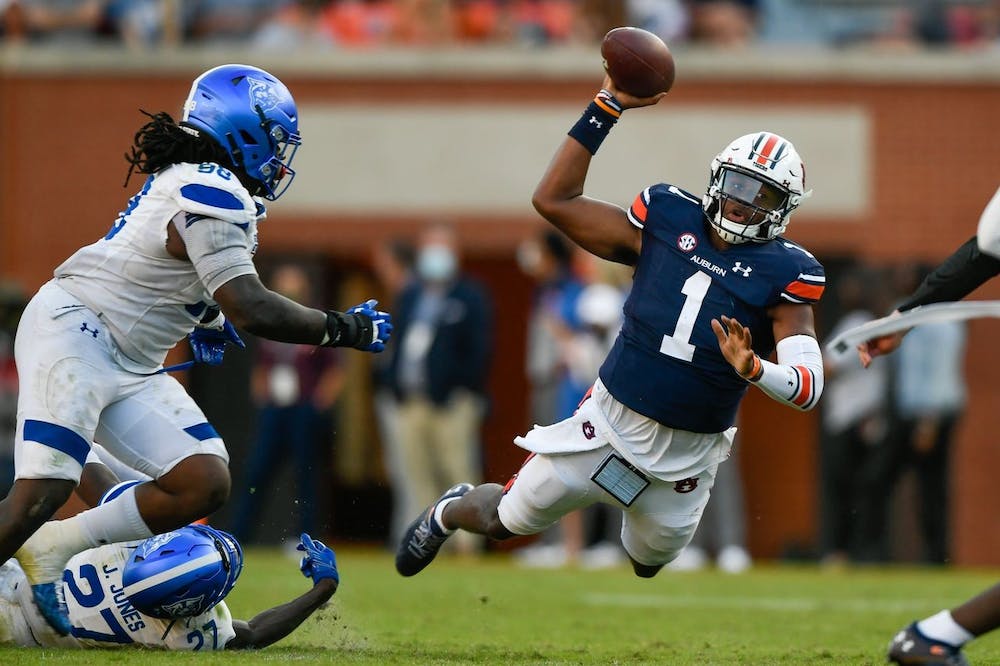 Auburn, Ala. (EETV)- No. 23 Auburn came from behind to beat unranked Georgia State 34-24 in Jordan-Hare Stadium on Saturday. With the come-from-behind win Auburn moves to 3-1 on the season.

Transfer quarterback T.J. Finley came into the game for the first time with three minutes to go in the third quarter. The LSU transfer showed what he was about in the final Auburn possession driving the length of the field to win the game.

“I’m proud of [T.J. Finley]. He played damn good to go out and get it done,” Auburn head coach Bryan Harsin said.

Finley was able to connect with senior Shedrick Jackson on fourth-and-goal to give Auburn the one-point lead. Auburn went for two and successfully converted to put them up three points with 45 seconds to go.

T.J. Finley went 9-for-16 for 97 yards and one touchdown. The transfer also rushed for 15 yards over three carries. His performance earned him a 127.8 QBR.

“I wanna focus on being a better teammate to my guys,” Auburn quarterback T.J. Finley said. “That’s my only focus.”

Junior quarterback Bo Nix struggled all around the field today. Nix posted a QBR of 96.7. That total is almost 50 points behind his season average of 150. Nix was taken out in the third quarter after going 13-for-27 for 156 yards.

Auburn’s game next Saturday will take them to Baton Rouge, La., to take on LSU at 8 p.m. CT in Death Valley. Auburn has not won in Baton Rouge since 1999.