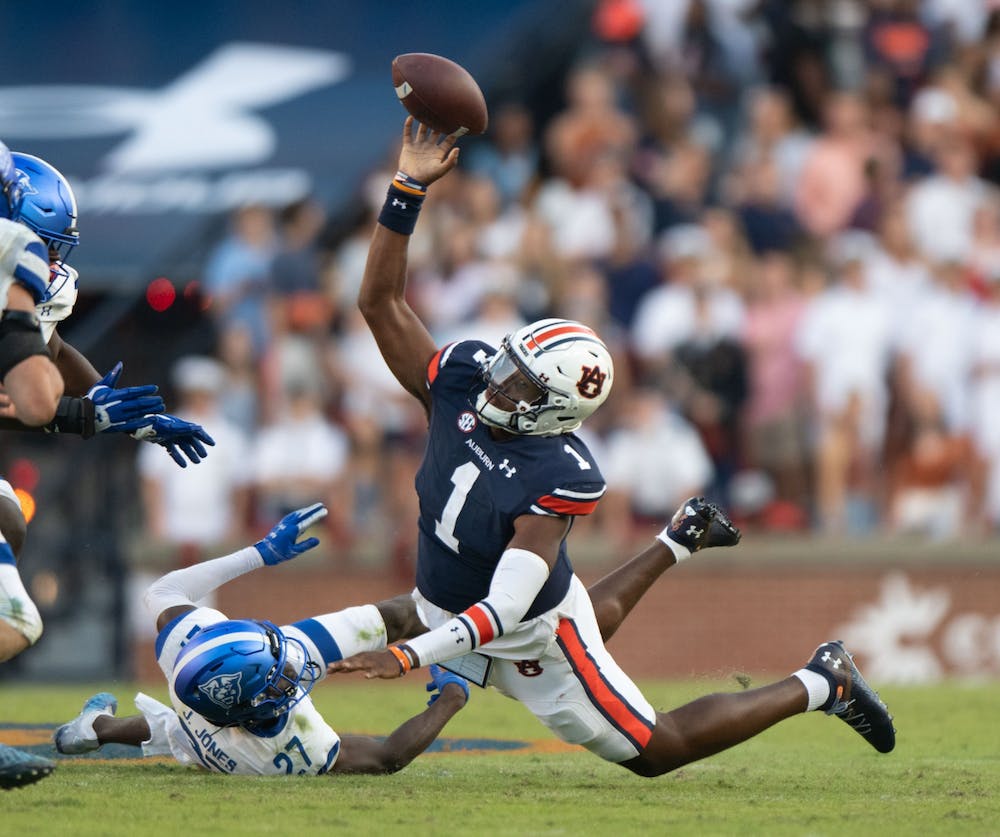 AUBURN, Ala. (EETV) - After a comeback win Saturday in Jordan-Hare against Georgia State, Auburn kicks off SEC play this weekend with a Tiger matchup against LSU. Stakes are high this weekend as Auburn is looking for their first win in Baton Rouge since 1999.

The question on everybody’s mind going into Saturday’s matchup is “which Auburn quarterback will get the starting job?”

Junior quarterback Bo Nix was benched Saturday after struggling to produce against the Panthers. Nix went 13 for 27 for 156 yards and failed to lead Auburn to any touchdowns. Auburn trailed 24-12 at halftime courtesy of four field goals by kicker Anders Carlson.

Nix started the second half but midway through the third quarter was benched and replaced by backup quarterback and LSU transfer T.J. Finley, who completed nine of 16 passes for 97 yards. Finley played the rest of the game and led the Tigers to a last-minute scoring drive to give Auburn the win. Finley was then named the team’s offensive player of the week.

While Nix is listed as the starter on this week’s depth chart, head coach Bryan Harsin said the decision had not been made yet as to who will start for Auburn.

“It has not been decided yet,” Harsin said. “Depth charts, it’s a little bit old school because so many things change throughout the week and all that. So, that stuff for me doesn’t really impact what we’re going to do this week.”

Harsin is gearing up for his first SEC matchup and is excited for the matchup.

“As we get into conference play, I think that’s the fun part for everybody,” Harsin said. “Every week is an opportunity to go out there and play a team that you’re most likely to play again. There’s history with these teams … and as a competitor, that’s something you look forward to every year.”

The Tigers face a big challenge this week going on the road, as Auburn has failed to find success in Baton Rouge for over 20 years.

“Our challenge is going on the road again and finding a way to win and being in an environment that is going to be loud and hostile,” Harsin said. “It’s going to be a good week for us to really hone in on a lot of things that we know we’re going to get better at and what I like about this team is that they want to and right now it’s a matter of putting together some really good days as we head into this game against LSU.”

Auburn kicker Anders Carlson and safety Smoke Monday spoke to the media Tuesday morning saying they are prepared for the Tiger versus Tiger matchup and are excited for what Saturday brings.

“We’re very excited,” Monday said. “We know we haven’t won in Baton Rouge in a long time but I feel like we’re gonna break that streak come Saturday. I feel like this team really wants it. We’re gonna prepare our best. We’re going to give LSU our best.”

Carlson, who was the team’s special teams player of the week, said while the matchup is a big one, his preparation is the same.

The Tiger-Tiger matchup is set to kickoff from Death Valley in Baton Rouge Saturday at 8 p.m. CT and can be found on ESPN.