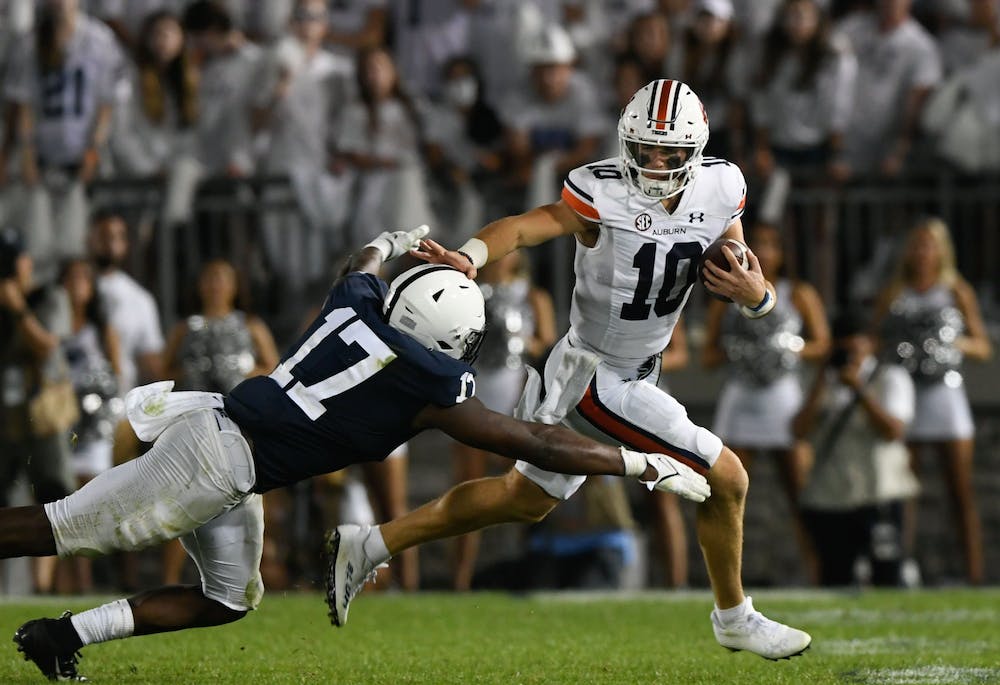 "It's a painful loss," head coach Bryan Harsin said. "I thought we played hard. The guys were focused. It comes down to a few plays. We put ourselves in a position to win, and we didn't. That hurts; it should. We need to learn from it and apply the things we can control, and go do those things.

Playing in front of 109,958 spectators in Penn State's annual White Out game, Auburn competed in front of their largest crowd since playing at Tennessee in 2004 while surrounded by 107,828.

The majority of the game was defined by Tiger miscues, including a costly call on fourth-and-goal from the 2-yard line that came late in the game with the Nittany Lions up 28-20. Auburn needed a touchdown and a successful 2-point conversion to potentially force overtime.

The Tigers called a timeout, then came out intending to execute a low-percentage fade into the end zone. Quarterback Bo Nix failed to connect with Kobe Hudson, and Auburn turned it over on downs.

Thanks to a strong defensive effort, the Tigers forced PSU to punt and regained posession on Auburn's own 38. With 38 seconds left in the game, Nix connected to his receivers three times, moving the ball all the way to Penn State's 26-yard line. Nix attempted one last throw as the clock expired, but the pass dropped incomplete, solidifying the 28-20 loss.

Nix completed just 21 of his 37 attempts for 185 yards without any touchdowns or interceptions. Despite playing with his usual confidence early in the game, misfires began to define his performance as the game progressed.

“There will be other opportunities in games moving forward as well, but explosive plays become a difference in any game, not just this game,” Harsin said.

"You know, we want to create more of those and give ourselves some opportunities to do that. We’ve just got to go finish on those plays, and with that we’ll continue to be a work in progress as we go through this season.”

Bigsby ran for 102 yards on 23 attempts, while Hunter gained 63 on nine carries. Bigsby scored the only two Tiger touchdowns on the night.

Defensively, senior Chandler Wooten led Auburn with 10 tackles, six of which were unassisted. Smoke Monday recorded eight, while Nehemiah Pritchett brought down six. Both Owen Pappoe and Derick Hall had five of their own.

Despite the team's defensive efforts, the PSU offense was still able to find just enough holes to reach the end zone four times.

The Tigers struck first with a 45-yard field goal from Anders Carlson to put Auburn up 3-0 with just under ten minutes left in the first quarter. PSU talked back, going up 7-3 after a 4-yard touchdown pass from Sean Clifford to Jahan Dotson.

In the beginning of the second, after an 11-play drive, the Tigers put up their own seven thanks to a 4-yard run from Bigsby. Right before halftime, the Nittany Lions put another touchdown on the board, ending the first half up 14-10.

To start the third, PSU scored first, stretching their lead to 21-10. Bigsby once again ran into the end zone for an Auburn touchdown, cutting Penn State's lead to just four points.

Thanks to a Carlson field goal in the beginning of the fourth, Auburn found themselves down just one point with over 14 minutes remaining in the game. However, another rushing touchdown for the Nittany Lions stretched their lead to eight points, a 28-20 deficit the Tigers were unable to overcome.

Auburn returns home for one final nonconference game ahead of Southeastern Conference play. The Tigers play host to Georgia State for their homecoming game next Saturday in Jordan-Hare Stadium. Kickoff is set for 3 p.m. CT on SEC Network.