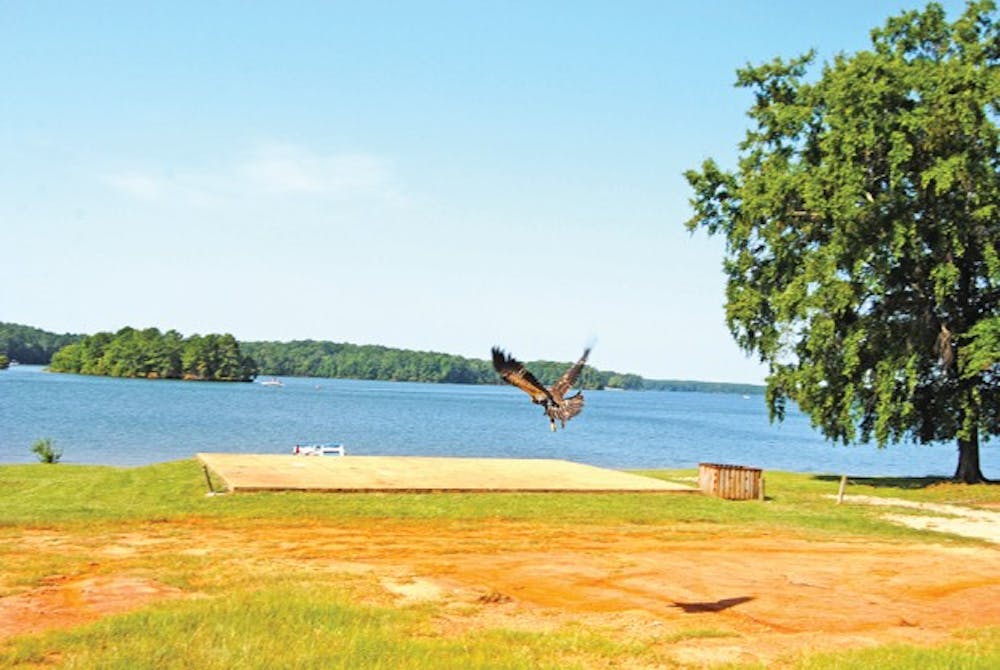 Auburn, Ala. (EETV) - After rehabilitation at the Auburn University College of Veterinary Medicine's Southeastern Raptor Center with help from specialists from the Georgia Department of Natural Resources, a young bald eagle was released back into the wild.

The bald eagle was hatched in early spring and was transferred to the raptor center in April after being found on the ground in Keysville, Georgia. At the center, it was treated for parasites and issues with weight. The reason it did not fare well once it fledged from the nest is unknown.

At the center, the bald eagle was socialized with an adult bald eagle to learn to socialize with others of its kind. After parasite treatment, numerous flight tests, and a medical clearance from veterinary clinician Dr. Seth Oster, it was released at West Point Lake.

West Point Lake supports a population of eagles throughout the year, especially during the hot summer months.

"It will be able to hone its hunting skills by observing other eagles," said Dr. Bob Sargent, a program manager with Georgia's DNR Wildlife Resources Division. "Additionally, West Point Lake is relatively close to Auburn, so this minimized potential travel-related stress."

Stephanie Kadletz, a raptor rehabilitation specialist at the raptor center, is a big advocate for the raptor center's mission: to rehabilitate and release injured orphaned raptors when possible, educate the public about these magnificent birds of prey, and research raptor-related issues.

"It's a privilege to continue to contribute to the wild populations of raptors in Georgia and across the Southeast," she said. "It's especially important with such species as the majestic bald eagle that was once endangered in the U.S."