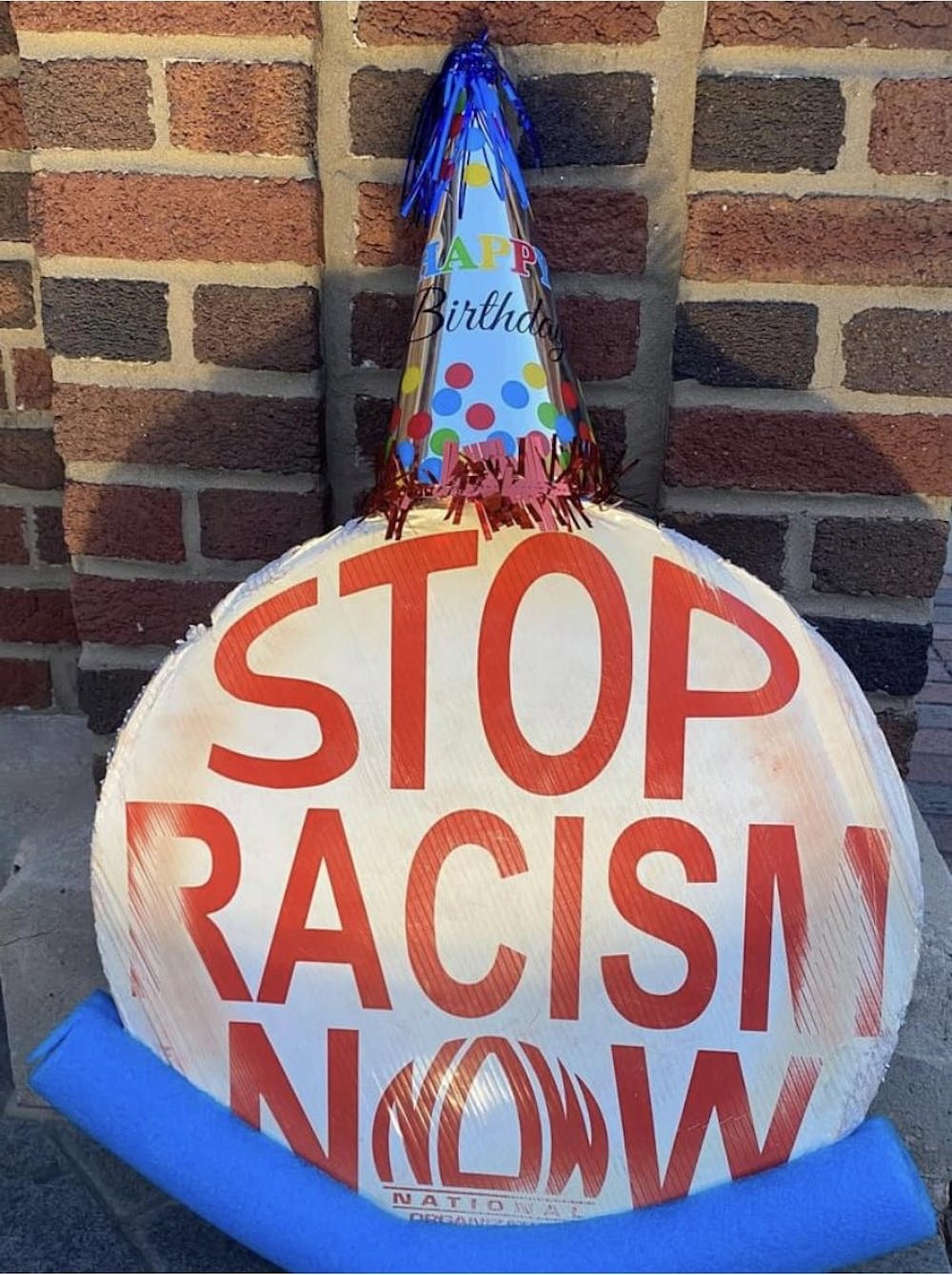 AUBURN, Ala. (EETV) - Auburn University research professor Kelli Thompson held a white cardboard sign that read "Stop Racism Now" when she returned to Toomer's Corner after a city-wide Black Lives Matter protest. In harmony with the message, others joined her, and one year later, the sit-in group celebrates the yearlong rally.

"As a country, we witnessed a protest in city across city for days on end, but then as time passed, I've noticed that some people went back to their normal lives," Thompson said. "I did not want to get comfortable and go back to the status quo. But I never thought it would have grown into this huge out pour of love and support from the community."

Everyday from 5 pm -7 pm, protesters make it their mission to create an environment where people can have civil discussions. The purpose of the demonstration is to raise awareness of racism in hopes that it may cease.

Thompson says the sit-in will not end anytime soon.

Thompson says she loves the community that has derived from it and the sense of hope she gets from the conversations and interactions. In addition, she says she has witnessed people gain knowledge on race-related issues and change over time for the better.

" We met this one kid when it was raining outside, and he asked us some questions about institutional racism, why racism is problematic in the world, and other things.Then the second time, he returned with his girlfriend, and the third time, he brought his parents. So it was a beautiful site to see, and we were happy that he was enlightened and continuing the conversation with others," Thompson said.

But since the protest began in June 2020, some days have presented various pitfalls and difficulties.

Thompson says people with an opposing view have threatened the group on numerous occasions. Thompson says one must be dedicated and willing to handle any obstacle in their way in the name of racial equality.

"If you've committed to showing up, then you've got to be willing to commit to that, and they're certainly those practical challenges. Some days it can be physically and emotionally grueling, and then there are more broadly challenges."

"You never know what the corner is going to bring, and it's a little stressful every day because something could happen because everyone does not agree with the message.But, how can we ever advance as a country and move beyond our racist history if we don't at least try to do something about it," said Damarious Nolan Watts, Army reservist. "It's our civic duty to keep the conversation going, and it makes us stronger, and each day is better than the last."

Through it all, friends at the corner provide ongoing encouragement on trying days. Friends such as retired music teacher Leighann Armstrong.

Armstrong was driving through the city when she noticed Thompson and others bearing signs of pictures of African American victims killed due to police brutality. Touched by the images, she wrote a song about the unity amidst the racial reckoning movements.

But that was not enough.

Armstrong later constructed a sign that said: "Jesus Stands With The Oppressed " and participated in the protest within the following days. Armstrong says she wanted to put herself in the shoes of oppressed individuals in the area.

"As white older women, I realize that I can just walk away from that corner and put down my sign and blend right in," Armstrong said. "I know that nobody will call me a racial slur or tell me to go home because of what I look like and who I am. So, I feel like those couple of hours that I spend on the corner give me a tiny taste of what it feels like to be a person of color in Auburn all the time."

Armstrong says she will continue to protest, but Thompson says she wants more members from the community and student organizations to join upcoming demonstrations for more significant impact.

Thompson says she did not expect the demonstration to last for an entire year but is excited about what the next year will bring. She says each protester has taken a "leap of faith", and despite their differences, she admires how things are set aside for more significant reasons.

"We are an incredibly diverse group of people, and we are diverse in our experiences. We come from different generations; we come from different places across the state and country, we have different religious affiliations. But, still, somehow every day, the right person is there for whatever conversation is needed, which is lovely," Thompson said.