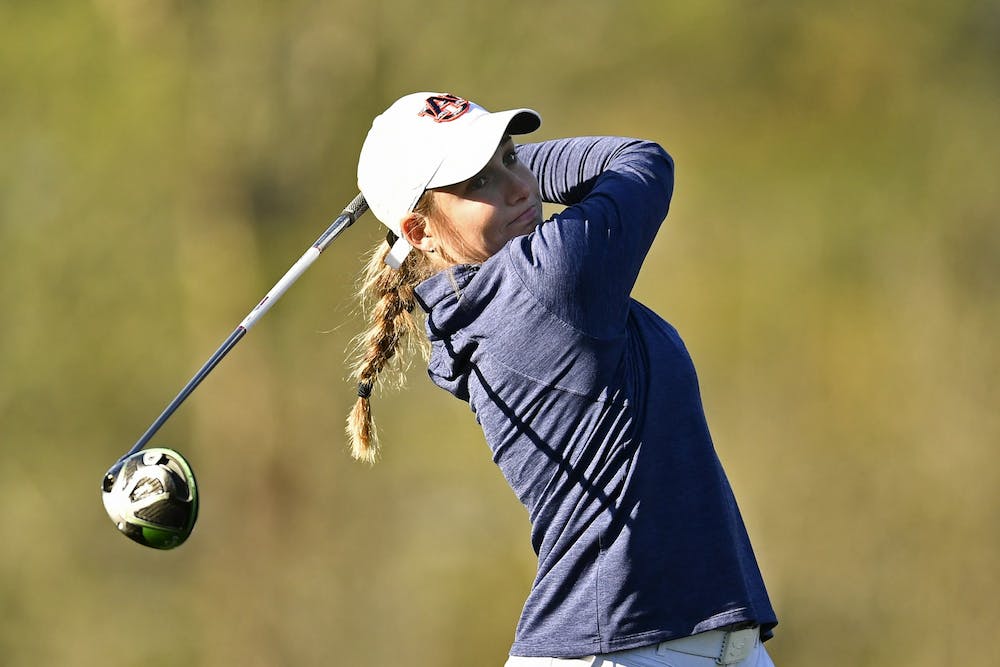 Kaleigh Telfer of South Africa plays her stroke from the No. 3 tee during Round 2 of the Augusta National Women's Amateur, Thursday, April 1, 2021.

AUBURN, Ala. (EETV) — After two impressive days of postseason play, the No. 6 seed Auburn women's golf team's NCAA run ended with a 4-1-0 loss to No. 3 Oklahoma State on Tuesday.

“This team has amazing heart,” head coach Melissa Luellen said. “To dig that deep to get into the top eight was an amazing feat. This group just loves Auburn, and I am so proud of how they represent our school.”

Despite a slow start in the first round, the team bounced back the last two days of stroke play. In the third round, the Tigers moved up six spots, placing them in the top-15 overall. Monday's play ended with Auburn in sixth place after finishing with a 10-under 278, pushing the team to match play for their second consecutive NCAA Championship.

The Tigers' only winner, fifth-year senior Elena Hualde Zúñiga, went 2-up with one hole left. Zúñiga's birdie on the 10th hole at the match's start pushed Auburn ahead early in the day. Keeping steady with her performance, Zúñiga went 2-up on the 18th, finishing the front nine in the lead.

“I am so proud of Elena and how she’s led this team in the postseason,” Luellen said. “She is going to be missed so much and has left her mark on this program.”

Despite battling throughout the match sophomore Megan Schofill remained behind most of the day. In her comeback attempt, Schofill went 1-down on the seventh hole and birdied on the eighth to put her down only one point. After forcing extras on the ninth with another birdie, Schofill fell on the 19th, losing the point to her Oklahoma State opponent.

“This was a tough loss, and we acknowledged the disappointment after the match,” Luellen said. “I told them how proud I am of them, their fight, their love for each other and their love for Auburn.”

With four of the five week's competitors set to return next year including Telfer, O'Berry and Julie McCarthy, the Auburn team will look to grow from this year's tough loss.

"I think our future is definitely bright as we have a very competitive group that just doesn’t like to lose,” Luellen said. “We’re excited for what’s to come for Auburn women’s golf.”