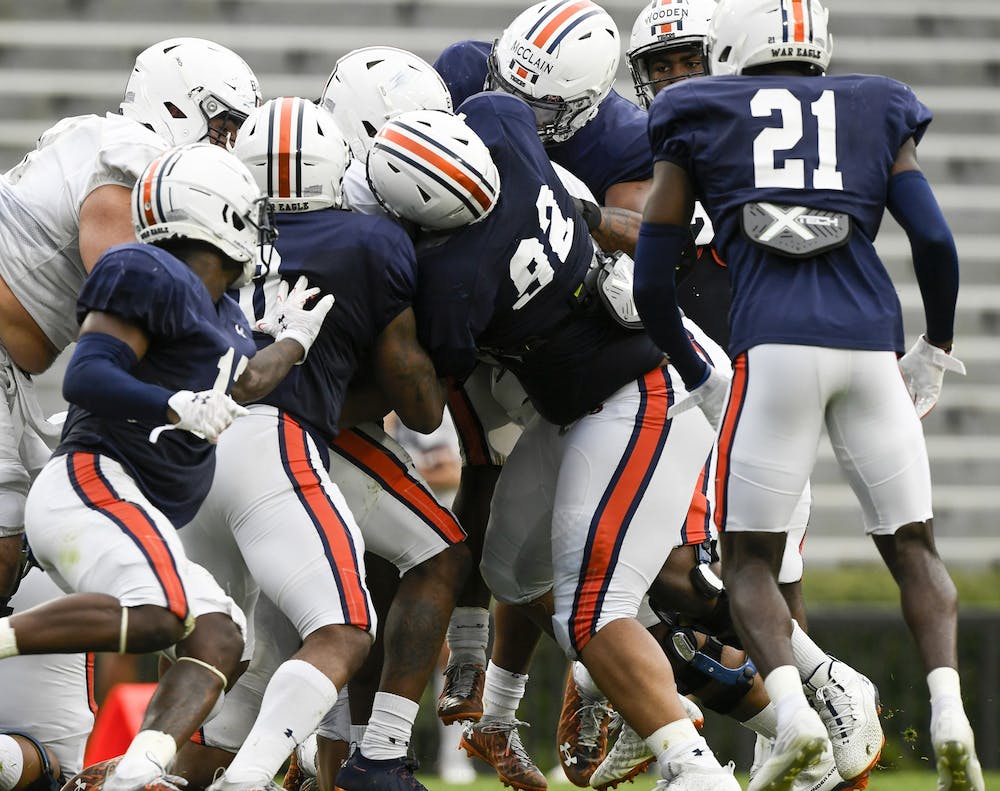 AUBURN, Ala. (EETV) Auburn football is a week away from their annual A-Day game. A trio of Auburn football players spoke Friday afternoon about the transition into the Bryan Harsin era. Seniors Tashawn Manning, Chandler Wooten and Shaun Shivers said the team is a "system"" and highlighted old and new faces.

Bryan Harsin's new hires include Mike Bobo as offensive coordinator and Derek Mason on defense. The new vernacular has been a transition for some of the players, but it's all part of the "system".

"Right now everyone is getting in their role and getting assembled," offensive lineman Tashawn Manning said. "We're polishing techniques that we learned last year and we're adding to our repertoire of what we can use this year."

As for the overall team, Manning says "he feels good about this group".

"They're good people on and off the field", he said. "Everyday we step on the field, we're ready to play."

Linebacker Chandler Wooten opted out of the 2020 season, but has been playing spring ball with the Tigers. He says it's been a difficult transition back, but he's happy with where he is now.

"It's exciting to watch Coach Mason go to work on a day-to-day basis", he said. "It's hard not to come to practice excited because you're getting better under him."

The last time Wooten played on the gridiron was in The 2019 Outback Bowl against Minnesota. He says the biggest challenge of the transition was the speed of gameplay.

"Football is another thing added to the plate on top of daddy duties, but I'm working on getting reacclimated to the game."

Running back Shaun Shivers closed out the press conference with remarks on the team's depth. After losing D.J. Williams and Mark-Antony Richards to the transfer portal, the running back room is thinner than usual.

"It does feel different now that they aren't here anymore," Shivers said. "But we have to do what we have to do- fill in for them."

Both Manning and Shivers were asked about center Nick Brahms. Brahms has started for the Tigers since 2018, but Bryan Harsin has been rotating combinations of the offensive line throughout spring practice. Brahms has been a part of the team since 2017 and is seen by the coaching staff as a leader on offense.

"He's been stepping up and taking control of the offensive line to make it the best it can be", Shivers said.

Manning and Brahms will play alongside each other this upcoming season. Manning recognizes his leadership and what he brings to the front line.

"He makes sure everyone is on the same page." he said. "He helped us out with not having a lot of experience, so now we can come together and move forward."

Auburn's annual A-Day game will be next Saturday, April 17 at 1 p.m. Safety measures and ticket information can be found at auburntigers.com.