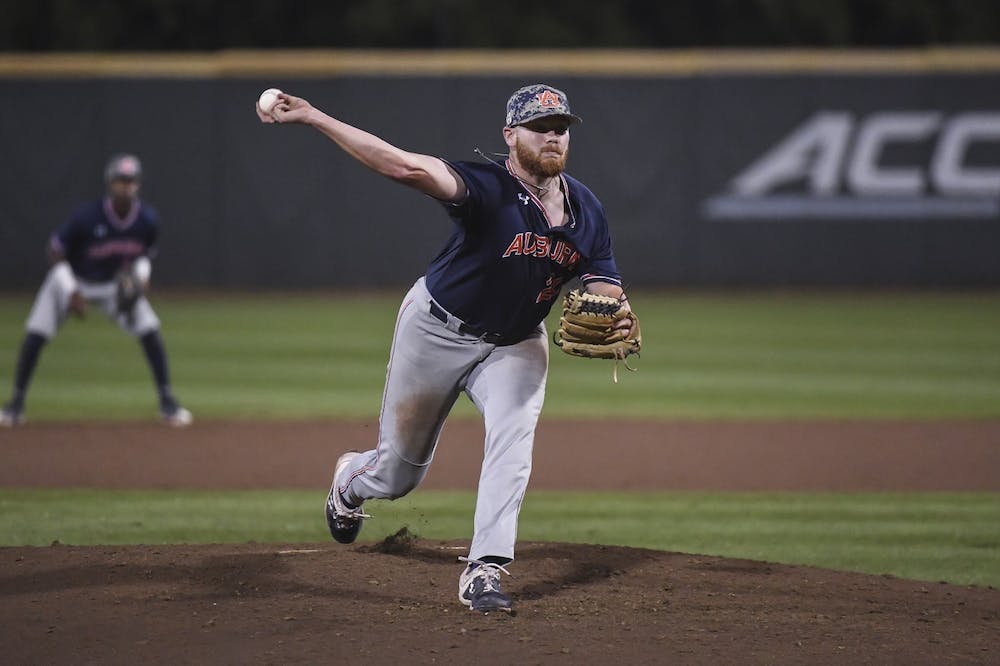 AUBURN, Ala. – Auburn had a 6-4 win against Samford Tuesday night at Plainsman Park with a four-run third inning.

This season the Tigers (15-18) improved in games this season 6-0, including Cody Greenhill’s first save of the season.

"From that point on with Glavine, Swilling, Skipper and Greenhill, seeing a collection of innings like that and rolling all the way to the finish of the ballgame is something we desperately needed," head coach Butch Thompson said. "The ball club needed it, and we felt good about the Bull being on the mound to finish it."

Greenhill in the ninth inning pitched a 1-2-3 with a strikeout to end the game for his 20th career save. He is now tied with Gregg Olson and Colter Bean for fourth on Auburn’s all-time list.

"It was fun getting back out there and getting to hear 'Hell's Bells' again," Greenhill said, mentioning his warm-up song. "You just get that adrenaline rush before coming in. For the guys I think it was like 'OK, let's go.'"

Peyton Glavine, Carson Swilling and Carson Skipper had Samford with one run on three hits in the fourth through eighth innings. This was Swilling’s team-high third appearance in the last few games.

Auburn’s offense was on fire in the game Ryan Bliss hit a single and Tyler Miller sent the first pitch into the visitor’s bullpen for Auburn to have a 2-0 lead in the first. The home run was Miller’s team-best 11th of the season.

"I'm settling in and just trying to find my niche there," Bliss said of batting in the leadoff spot. "I'm just trying to get off to a good start and help the team get the momentum started."

Samford had a walk with back-to-back home runs to take the 3-2 lead in the second. Will Morrison had a solo home run but buckled down later to leave the bases loaded.

Back-to-back home runs from Rankin Woley and Steven William to get Auburn in the lead again. Bryson Ware grounded out to the shortstop in the end of the inning to help score Brody Moor and keep the lead 6-3.

Glavine had one run but struck out four batters in 2.0 innings for the win. He allowed one infield single in the final four frames.

For the 17th time this season Bliss had multiple hits, while Miller and Woley had multiple runs. Miller had his team-best of the season and his 42nd and 43rd RBIs.

Auburn will turn around on Wednesday to play Jacksonville State Wednesday at 6 p.m. CT at Plainsman Park.