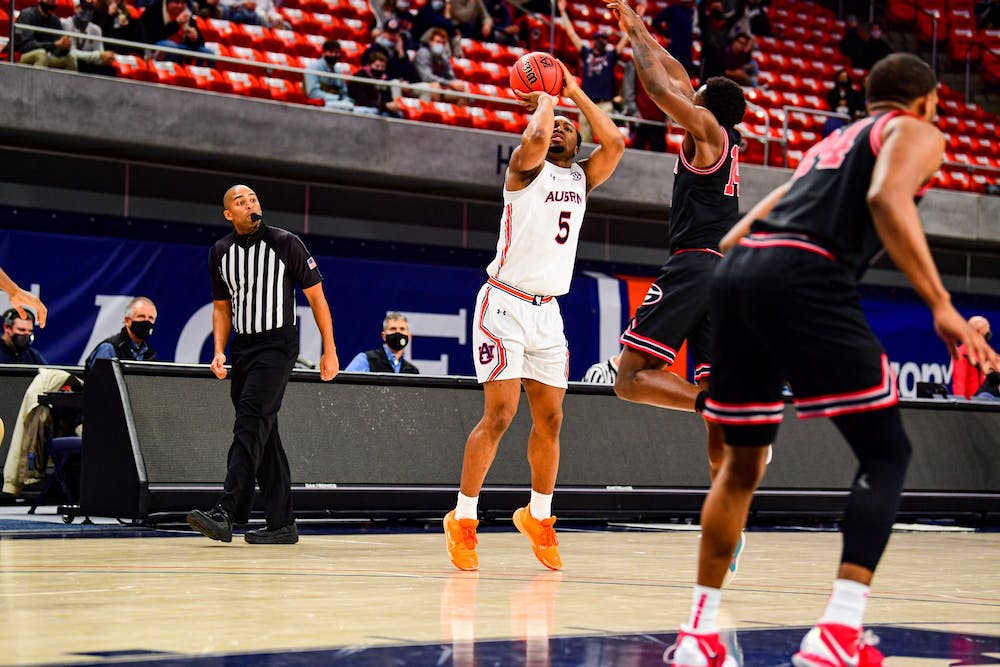 AUBURN, Ala. (EETV) The Auburn Tigers entered Auburn Arena on Tuesday night with hopes to complete their first sweep of the 2020-21 season; however, the Bulldogs of the University of Georgia proved to be too much to handle in the second go round. UGA handed Auburn its second consecutive defeat 91-86.

As it has on a number of occasions thus far, Auburn suffered from a slow start to the contest. The Dawgs opened the game on a 10-4 run, pressing on defense and forcing the Tigers to take contested shots from the field. Center Babatunde Akingbola accredits the team’s woes to its lack of execution on the plan the Auburn coaching staff laid before them.

“The coaching staff, they had a plan for us and we didn’t execute it,” Akingbola said. We gotta learn from this and move on.”

Following the under-16 minute media timeout, the orange and blue began to battle back, bringin the contest within four; however, were unsuccessful in drawing even before heading into the locker room. Head coach Bruce Pearl accredits this to his squad's lack of mental awareness to know their opponent.

“Very frustrating, they were beating us with their dominant hands,” Pearl said. “We weren’t locked into the scouting report.”

The Tigers entered halftime trailing the Dawgs 39-30, a feat that frustrated Pearl.

“We knew what this was going to be from Georgia,” Pearl said. “We knew. And we did not respond.”

Auburn came out of the locker room swinging, improving its shooting from the floor and cashing in on second-chance buckets; however, one obstacle still stood in its way. The Bulldogs refused to stop scoring and the Tigers had no response on the defensive end of the floor.

“They drove by us a lot,” Pearl said. “Georgia’s got really good guards that can beat you on the bounce...so, when that happens, you have to challenge them at the rim, give up backside rebounding — Georgia does a really good job on penetration back cutting — and so we kind of played into their hands.”

Pearl’s squad mounted a comeback behind the hot hands of sophomores Jamal Johnson and Jaylin Williams; however, could never cut the lead down to anything less than three.

The seventh year head coach of the Tigers accredited his squad’s inability to close the gap to a rather simple concept: failure to find success against a better performance in the paint.

Pearl and the rest of the Tigers will now turn their attention towards breaking the team’s two-game losing streak when they play host to the visiting Rebels of Ole Miss on Saturday afternoon. Auburn’s first matchup with the Rebs resulted in a four-point loss for the orange and blue; however, the Tigers roster was missing one piece at that point in time: Sharife Cooper. Pearl notes that his team is better prepared in the rubber match.

“I know that the first time we weren’t ready to play.” Pearl said. “That’s on the coach. I’ve got to own that.”

Tipoff between the Tigers and the Rebs is set for 3:00 p.m. CT. The contest will be broadcast live on ESPN2 and the Auburn Radio Network.