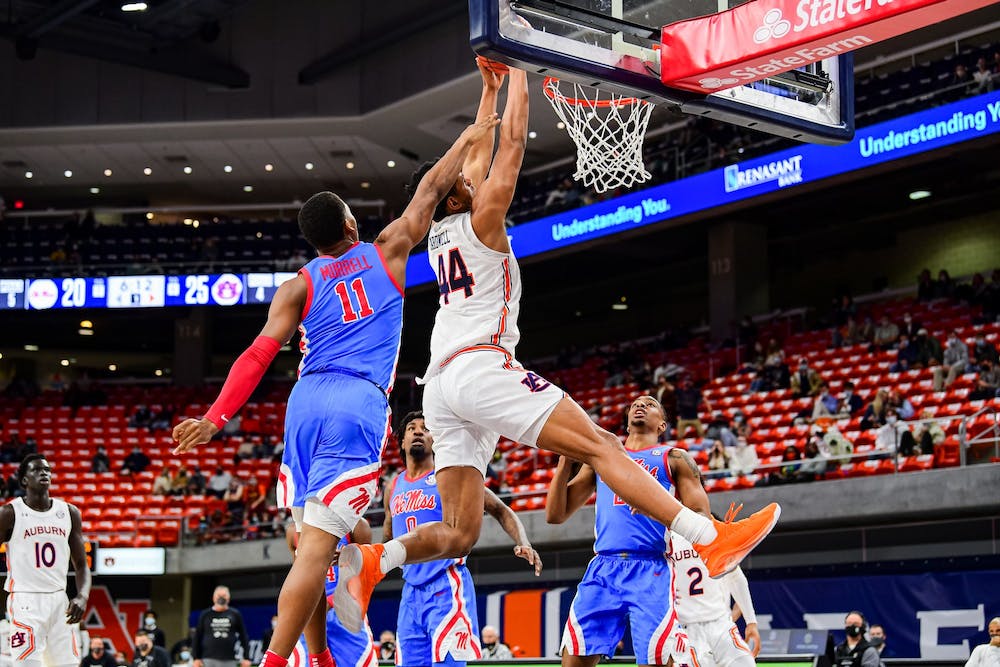 AUBURN, Ala. (EETV) - Despite Sharife Cooper's last minute efforts for the Tigers, Auburn fell in overtime to Ole Miss 86-84 Saturday in Auburn Arena.

With 13 seconds to go in overtime, Cooper knocked down a huge three-pointer to tie the game at 84.

"We need one stop, and we get into a second overtime," Cooper said.

Ole Miss's Devontae Shuler takes the ball up-court before crossing over at the top of the key.  Cooper heavily contests Shuler, but it does not matter as Shuler bangs home an off-balance jumper at the buzzer to give the Rebels the 86-84 win.

"When they ran that middle ball screen, we asked our guards to switch out. They didn't. They  switched flat, which let Shuler get to his spot," Bruce Pearl said.

What was supposed to be a bounce-back win following the demoralizing loss to Georgia on Tuesday turned into another late-game debacle.

With 16:22 remaining in the second half, Auburn stretched their largest lead of the game to 14.  However, every Auburn fan knows that the game is never over, no matter its score. Ole Miss proved that yet again, Romello White made a layup tying the game at 72, and ultimately sent it  into overtime, where the Tigers would fall to the Rebels.

Ole Miss holds their opponents to a mere 62.2 points per game. Pearl mentioned that offense is not the issue as the Tigers put up 84 points against the SEC's second-best defensive team. Giving up a combined 56 points between White (30) and Shuler (26) cost the Tigers the win.

"Shuler is an All-SEC guard and played like it, particularly down the stretch," Pearl said. "Romello is a monster in there."

Following the loss to Georgia earlier in the week, Pearl said that the team "wasn't ready to play."  That was not the case Saturday, at least for the first half, that is.

Auburn went into the half with a 40-34 lead while shooting 53.3% from the field and 46.2%  from three-point range. They were also able to shutdown Shuler to three points on 1-7 shooting.

"First half, feel like we played great defense," Cooper said. "We had lots of stops; we played  with good energy. In the second half, it dialed down a little bit. We just got to watch it and learn  from this."

After a promising win against No. 18 Missouri and a hard-fought loss against No. 2 Baylor, theTigers looked to have two manageable wins at home against Georgia and Ole Miss. Instead,  Auburn loses both games at home and is now on a three-game losing streak sitting at .500 andheading back on the road.

"We take this loss on the chin and get ready for Tuesday against Vanderbilt," Cooper said.