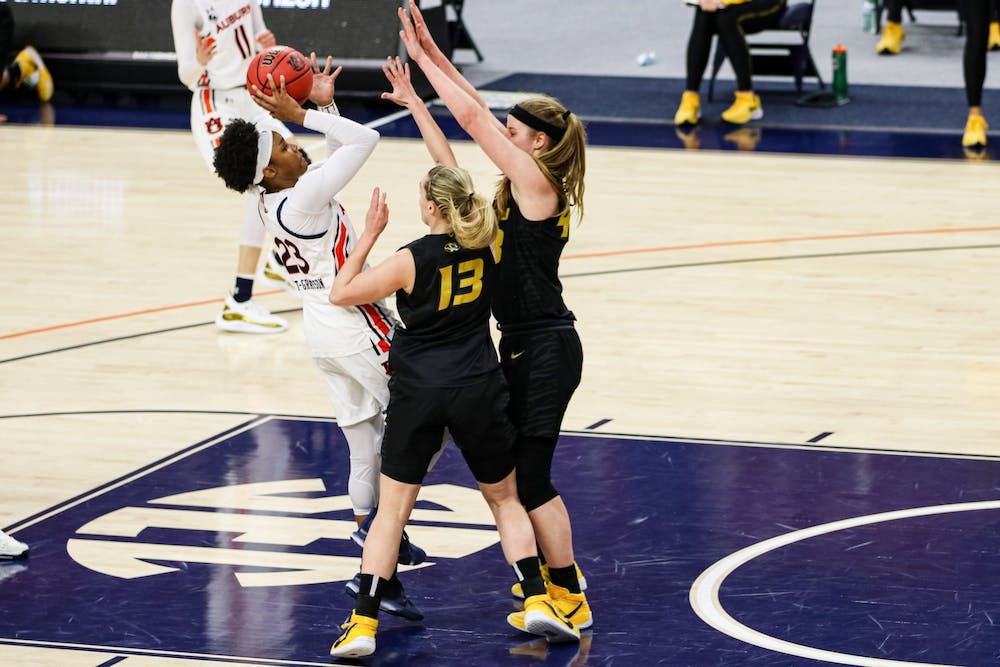 AUBURN, Ala. (EETV) In the 2020-21 sports season, normality has gone to the wayside, something the Auburn Tigers have fallen victims of as much as any team in women’s college basketball. When coach Terri Williams-Flournoy’s team hosted a struggling Missouri squad on Super Bowl Sunday, the 85-75 loss was the product of a contest that was — in a word — peculiar.

“Some of it was the rotation,” Williams-Flournoy said. “When we came up to trap if we didn’t close the gap properly or tight, they would get the ball out and our rotation was extremely slow.”

In the second period of play, the narrative began to change. Despite Missouri’s red-hot shooting and refusal to stop finding ways to score, Honesty Scott-Grayson led the Auburn charge and began to chip away at what was once a 14-point lead, bringing the game to within three before heading into the locker room.

Coach Flo noted that Scott-Grayson was the Tigers’ impact player, praising her drive heading into the contest.

“You could tell right from the Jump,” Williams-Flournoy said. “She came out ready to go. We just needed a few more people, not really offensively.”

Scott-Grayson’s first half performance consisted of 20 points and two rebounds. The redshirt sophomore saw the court for 19 of the first 20 minutes of play.

Behind Scott-Grayson’s first half showing, Auburn entered halftime trailing by just three in a 45-42 contest.

Early second-half play from the Tigers of Missouri gave a spectator the impression that the contest was all but over. The black and gold constructed a lead of 19 points, seemingly placing a dagger in the will of Auburn.

That is, until the orange and blue mounted its second comeback behind a career high 30 points from Scott-Grayson in the latter portion of the third quarter, shrinking the deficit to as low as eight; however, were never able to push themselves over the hump and eventually allowed their opponents back in double-digit control of the contest.

Scott-Grayson and the rest of the Tigers must now turn their attention to rivalry week on the plains, where the squad must travel to Athens before returning home to play host to in-state rival Alabama, a game that coach Flo emphasizes as important

“If you’re auburn and you're playing alabama there’s really not a whole lot that I — as the coach — should have to say to you,” Williams-Flournoy said. “It’s on our home floor and we lost up there. If that doesn’t motivate you, you might as well not play at Auburn.”

Auburn’s contest ahead of the iron bowl of basketball, a clash in Athens with the Dawgs of UGA, will take place inside Stegeman coliseum on Thursday, Feb. 11 at 6:00 p.m. and will be made streamable on SEN+.