No. 2 Gamecocks Too Much For The Tigers 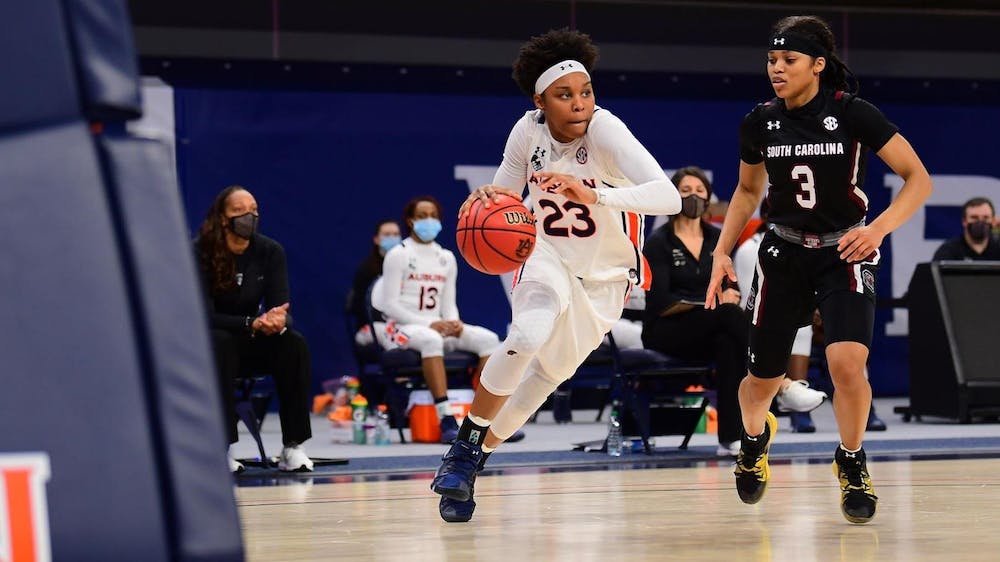 AUBURN, Ala. (EETV) - It was all South Carolina Thursday night in Auburn Arena. The No. 2 Gamecocks made it clear that they were not going to let the Tigers get close to a potential upset. The Tigers fell to the No. 2 Gamecocks with a final score of 77-58.

“We’ll get better, sometimes when you get knocked down, you got to get right back up and that’s what we will have to do,” said Auburn head coach Terri Williams-Flournoy.

South Carolina started fast out of the gate taking a quick lead 7-0 before a timeout by Auburn with 7:53 left in the first quarter. Auburn’s first points came from a three pointer by sophomore starting guard, Honesty Scott Grayson making the score 10-3. Auburn struggled to continue to get things going shooting only 10 percent (2-20) from the field at the end of the first.

The second quarter was the same script as the first: all Gamecocks. USC scored 11 points straight without an answer from the Tigers. Forward Romi Levy led the Tigers in scoring at the half with six points from her two three-pointers.

The score at halftime was 47-18 with USC shooting 58.1 percent (18-31) from the field and Auburn shooting 19.4 percent (7-36). “I didn’t think we were playing very hard in the first half,” said Williams-Flournoy. “We didn’t compete like we needed to, like we had done in previous games.”

The Tigers improved their shooting from the field in the second half with 53.3 percent (16-30) but it was not enough to erase their first half struggles and match USC’s high-powered offense.

“I thought they came back in the second half and played harder and that’s all we want; we just want effort and want you to play hard,” said Williams-Flournoy.

Despite the loss, Auburn had big scoring from a few players. Freshman forward, Romi Levy had a career high from the three-point line as she sunk 3-5. Scott-Grayson had a big game scoring 15 points. This made the sophomore the highest scorer of the night for the Tigers.

Auburn will continue to look for its first SEC win of the season as it will face the Tigers of Missouri at Auburn Arena on Sunday, Feb. 7. Tipoff will be at 12pm CT and will air on the SEC Network.