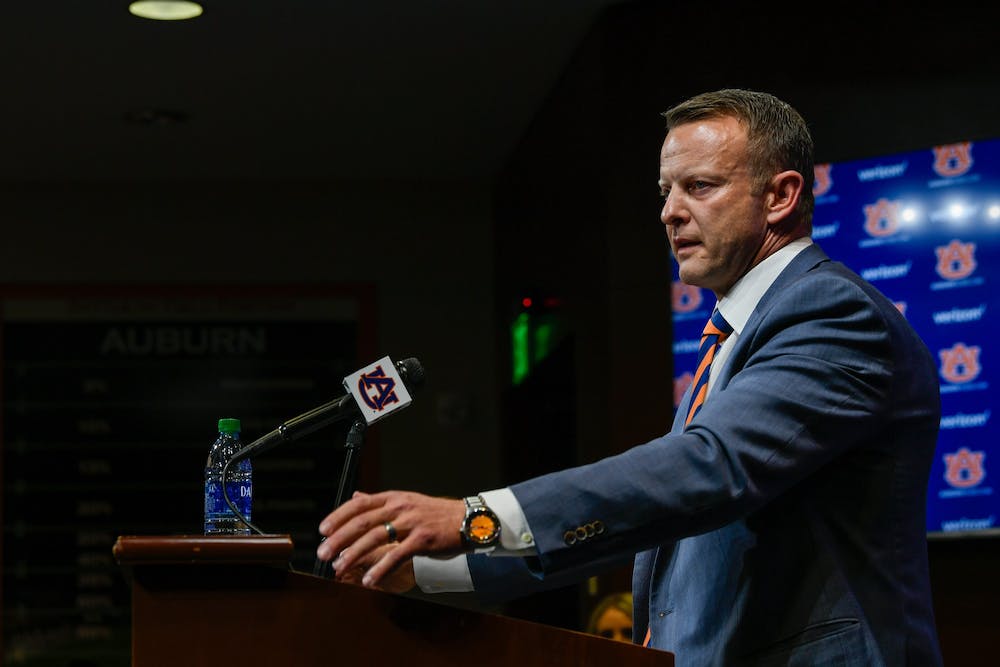 AUBURN, Ala. (EETV) - On the second National Signing Day of the Bryan Harsin era, fans anxiously awaited the completion of Auburn’s 2021 class of new prospects.

The newly hired head coach entered the day with the mentality of recruiting for both now and for the future. Following the hire of Boise State’s Dan Uscher as Director of Recruiting, Harsin referred to recruiting as a continuous cycle.

“Our recruiting process is one that never stops,” Harsin said.

Eagle Eye has been following signings for the tigers throughout the day, and will continue to give live updates as more commits ink their letters of intent.

Welcome to The Plains, @juwon_gaston3!

The ultimate competitor, this resilient safety is going to make a HUGE impact.#WarEagle pic.twitter.com/m49VcKiIYV

Despite speculation surrounding a push for out of state recruting, Harsin proved to fans that he would not refrain from recruiting locally; the signing of Juwon Gaston speaks for itself. Gaston, a 5-foot-11 safety for Montgomery, Ala. inked his name with the Tigers Wednesday afternoon. Listed as a four-star and a three-star composite by 247 Sports, Gaston opted to stay close to home despite rumors circling that he would be taking his talents to the University of South Carolina.

Welcome to The Plains, @03Cayden!

This hard-hitting, ball hawk is going to be feared for many years to come.#WarEagle pic.twitter.com/LdzCKSRuEG

The first flipped committment for the Tigers came via Cayden Bridges, who announced his signing to Auburn during his ceremony at Magee High School on Wednesday. The 6-foot-2 190-pound safety is listed as a three-start per 247 Sports and was set to be the first commit under Kane Wommack before being recruited by Auburn and Mississippi state.

Welcome to The Plains, @AndrewLeota51!

Derek Mason's front seven continued to improve with the announcement of Northwestern defensive end Eku Leota's signing to Auburn Wednesday afternoon. Standing at 6-foot-3 220-pounds, Leota joins the Tigers with as a graduate transfer with three remaining years of eligability. Hailing from Asheville, N.C., Leota recorded 13 tackles and four sacks across just eight games for the Wildcats in 2020. He did not compete in the team's New Year's Day Citrus Bowl matchup against Auburn.

Welcome to The Plains, @TarvarishD!

You're gonna want to see his KILLER speed inside Jordan-Hare.#WarEagle pic.twitter.com/T81GAsNE5o

Auburn improves its depth on both sides of the ball with the signing of Tar'varish Dawson Jr. Dawson, a 5-foot-10 175-pound athlete from Lehigh Acres, Fla. joins the Tigers as a three-star per 247 Sports who seeks to bring his element of speed to the table in the SEC. A versitile athlete who will play either cornerback or wide reciever, Dawson boasts a time of 10.58 in the 100-yard dash, a feat that Harsin will likely find beneficial in either position.

Welcome to The Plains, @elitejoko8!

An ELITE playmaker at the linebacker position is now a Tiger.#WarEagle pic.twitter.com/VgkbFnWH2w

The Tigers cashed in on their second signee of the day in Joko Willis, a three-star inside linebacker and the No. 37 overall JUCO prospect in the country per 247 Sports. The 6-foot-3 215-pound native of LaGrange, Ga. transfers to Auburn from Independence Community College where the linebacker was unable to compete in the 2020-21 season due to the COVID-19 outbreak. Willis' most recent game action came in his senior year of high school at Troup County where the standout linebacker played on both sides of the ball, leading his team in total recieveing.

Adding a MASSIVE offensive tackle to the OL room. pic.twitter.com/9ohyLOCTuj

The Tigers got things started in a big way, literally. After verbally committing to Auburn on Sunday, the 6-foot-7 offensive tackle was the first to sign to play for the orange and blue. Smith, a Reidsville, N.C. native, is ranked as a three-star by Rivals and ESPN, four-star by 247 Sports, who also ranked him as the No. 27 offensive tackle in the 2021. The offensive tackle was previously committed to the University of Tennessee prior to the firing of Jeremy Pruitt; however, announced his decision to decommit from the Vols on Jan. 18.