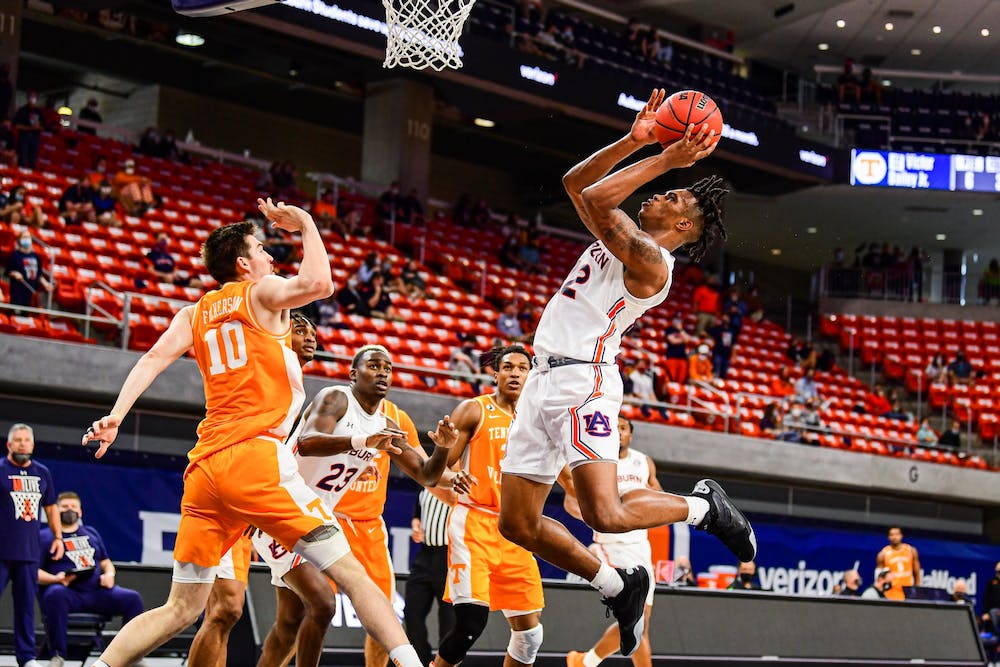 AUBURN, Ala. (EETV) - Auburn snapped its three-game skid with a victory at home against the Volunteers. Their balanced attack led the way to victory, as all five starters scored in double digits. The win marked Auburn's sixth consecutive victory over Tennessee.

Sophomore Allen Flanigan led in scoring with 23 points on 50% from the field. Devan Cambridge and Flanigan hit important shots in the second half to retain their lead.

Sharife Cooper remained on the sidelines for today's game, missing his second game in a row after an ankle injury during Monday's practice. However, the projected first round pick was not in his walking boot this game. Jamal Johnson started in his place and took over most of the ball handling duties.

Flanigan felt his role being a bit easier today as Johnson took over his role from Tuesday's loss to the Gators.

“For me, being in my normal spot—it felt good,” the sophomore said.

The close battle on the Plains was decided mostly on the defensive end, as well as at the line. The defensive intensity was evident all game long from the Tigers. One play that highlighted Auburn's effort came with 2:02 left in the game when the Tigers forced a shot clock violation in what was a pivotal possession.

Head Coach Bruce Pearl felt the effort was a big difference maker in the game.

“We did it with tremendous effort and energy. Our starters were terrific,” coach said. “Our kids didn’t turn it over. They didn’t rush. They let me coach them a little bit to get them in better spots.”

Auburn's energetic play style led to many second chance opportunities. A key component of the victory was the success Auburn had on the glass. The Tigers finished the night with 16 offensive rebounds.

Flanigan confirmed after the game that the glass was a point of emphasis this week.

“We knew coming in that in order to win, we were going to have to crack down on their second chance points,” Flanigan said.

The Tigers travel to Tuscaloosa Tuesday to take on the surging No. 6 Crimson Tide. Tip-off is set for 6 p.m. CT at Coleman Coliseum.