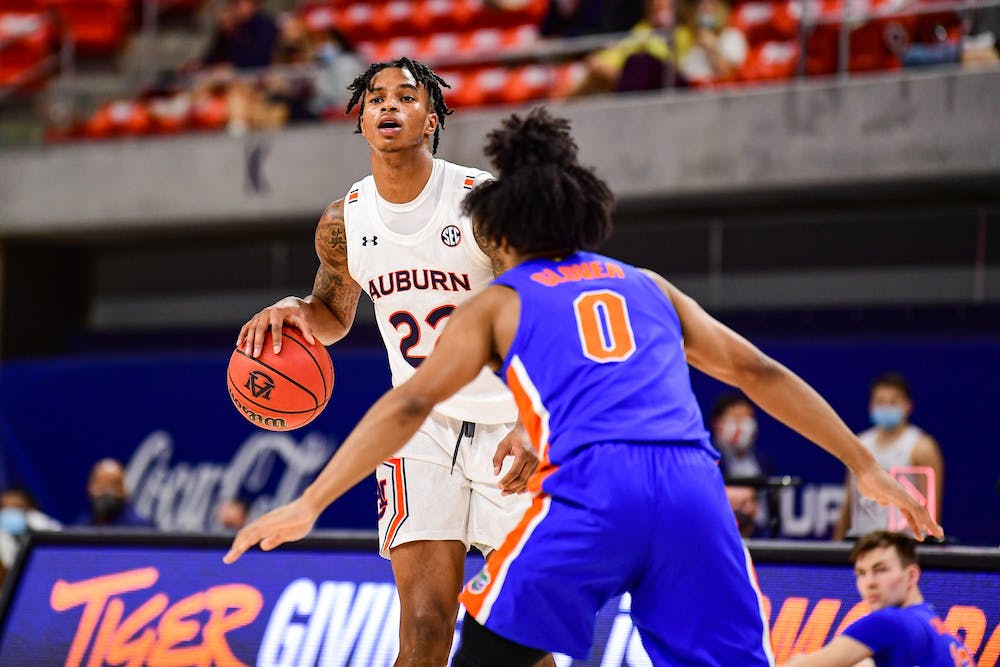 AUBURN, Ala. (EETV) - The Tigers struggled offensively in a 74-57 loss to the Florida Gators as star freshman Sharife Cooper was out of the lineup on Tuesday with an ankle injury.

During practice on Sunday, Cooper came down with a severe ankle injury that ultimately placed him in a walking boot.

"He got hurt in practice and turned his ankle pretty good," coach Bruce Pearl said. "We'll see how the week progresses; obviously, we never rush guys back.

The Tigers missed Cooper for the first 11 games to begin the season, but this was Auburn's first game with neither Cooper nor freshman co-star Justin Powell.

Pearl looked for the rest of the team to take a stride in their game as they faced a future NCAA tournament-bound Florida team.

However, with no point guard on the roster, small forward Allen Flanigan has to play out of position to make up for the lost role. Players changing positions on the fly caused Auburn to look all out of sorts and finished with 21 total turnovers.

"It's just really hard to ask Allen to come off a position where he could be a 10 to 15 player in the league off the ball and then make him play point guard," Pearl said.

Auburn struggled to make a basket and did not hit the double-digit mark in points until the 6:44 mark in the first half. The Tigers shot a mere 30.4% from the field (7-23), had 13 first-half turnovers and trailed by 22 at the break.

Propelled by the Auburn crowd, the Tigers responded by putting together a much improved second half. The Tigers outscored the Gators by five in the second half and held Florida to 10 fewer makes than they did in the first half.

"To turn Florida over like we did in the second half and get after them and outscore them, I was really pleased with our kids' effort," Pearl said.

Auburn's first-half deficit was too much for them to overcome in the second half, but they never quit on each other.

"We felt like we just had to start fighting; it happened too late but better late than never," Auburn small forward JT Thor said.

No. 25 Tennessee travels to Auburn Arena for a Saturday showdown, and then Auburn caps its season off by traveling to Tuscaloosa next Tuesday to face No. 8 ranked Alabama.