Tigers Collapse in Second Half, Fall to Hogs 75-73 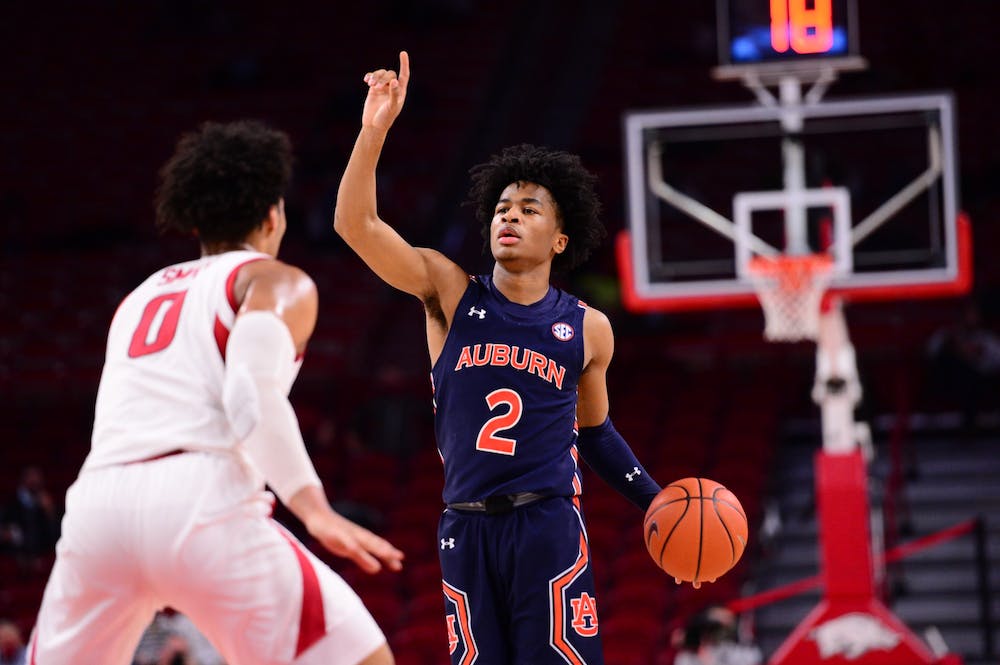 AUBURN, Ala. (EETV) The Auburn Tigers fell short in their chance at redemption against the Arkansas Razorbacks in Fayetteville on Wednesday night; however, the 75-73 final score is in no way an accurate representation of the roller coaster-esque game that Bruce Pearl’s squad took part in. Much like contests of early season Auburn, Wednesday night was a tale of two halves.

Positives for the orange and blue were plentiful in the first 20 minutes of game time. The Tigers rallied behind Sharife Cooper’s 14-point display in the early going, shooting 16 of 27 for the field and building a lead as large as 19.

The final two minutes of the first half was seemingly the altering of the narrative which would last the remainder of the contest. Despite a slow start offensively, the Hogs heated up from the field, knocking down eight of their 10 shot attempts before heading into the locker room.

Auburn head coach Bruce Pearl was pleased with his squad in the early going; however, acknowledged that the Razorbacks began to get the better of them late in the first half.

“Great first 16 minutes of basketball on the road.” Pearl said. “Played really well at both ends. Last three or four minutes of the first half, we kind of took our foot off the gas and gave Arkansas some confidence. They kept that through the halftime.”

Auburn entered halftime with a 43-31 lead; however, the Hogs were adamant to flip the script in the final period of play. Eric Mussellman’s squad opened the second half on a 12-2 run and would capture its first lead of the contest shortly after, a feat that frustrated the Tigers’ head coach.

“Starters were very poor to start the second half,” Pearl said. “Effort, energy, 50-50 balls, points in the paint, points at the rim.”

Despite what one could consider to be a defensive collapse in the latter portion of the contest, Pearl acknowledged that the Tigers did have positive takeaways. Cooper continued his trend of exceptional play on the offensive side of the ball, ending the game with 25 points, four rebounds and four assists to boot. Pearl faults himself for not allowing his point guard to play with more tempo when the game hung in the balance.

“From my standpoint, down one late, I should have probably let Sharife go quicker than that,” Pearl said. “If he goes quicker and he doesn’t score, we foul and we get another possession with more time. So, in a one-point game we should have gone quicker...so that’s on me.”

Despite frustration with the loss, the seventh-season head coach was sure to note his pleasure with his squad's ability to continuously try to bring home a win.

“Showed some heart, some character getting back in the game and made some plays and obviously didn’t quit,” Pearl said.

Pearl, Cooper and the rest of the Auburn Tigers will now have two days to regroup and prepare for their next matchup: a struggling and largely unknown South Carolina team. Saturday’s contest will take place at Colonial Life Arena in Columbia, SC and will tip off at 11:00 a.m. CT. Live broadcast will be available on ESPN2 and streamable on the ESPN app.