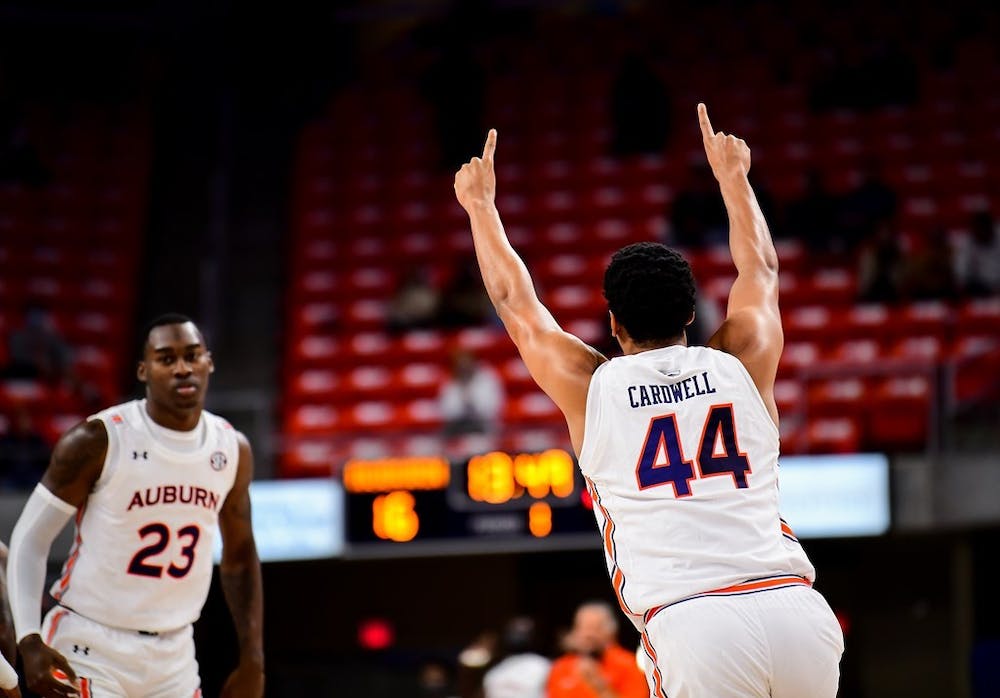 Scoring came early and often for the Tigers as the squad was on the board first and did not trail the Gamecocks for the remainder of the game. Head coach Bruce Pearl accredited his team’s success in the early going — and throughout the game — to having multiple playmakers playing at the point guard position.

“To have both Allen Flanigan and Sharife Cooper on the floor together right now, it gives me two playmaking guards that I can work through,” Pearl said. “It helps me as a play caller.”

The squad’s fast start was due  — in large  — to effective shooting from range, a feat that Pearl has long used to define his program; the head coach was pleased with what he saw from his guys on Saturday afternoon.

“It’s important in a spread offense to be able to stretch the defense,” Pearl said. “When Jaylin Williams and JT Thor played a lot together in this game because South Carolina went smaller...and we went small also. I thought that helped us offensively because we were able to put five guys on the perimeter that can shoot it.”

Regardless of how well his squad shot, Pearl could not help but mention the toughness of  freshman point guard Sharife Cooper, who had — arguably — the most impressive feat of the afternoon: a first half double-double. Cooper racked up 10 points and 11 assists in the first 20 minutes of gametime.

“The thing about Sharife is, to be a great undersized player, you have to be the toughest guy on the floor,” Pearl said. “Sharife is going to get bounced. Every game, all game. It doesn’t bother him. It just doesn’t. He’s a tough kid and that is required in undersized players. And you know what? The opponent knows that.

At the conclusion of the contest, Cooper posted 16 points, 12 assists and an additional 6 rebounds, placing himself on triple-double watch despite eventually pulling up short. Pearl noted that, despite the double-double, the 5’11” freshman was frustrated in his lone assist in the second half.

“Sharife was upset because he only had one assist in the second half,” Pearl said. “Claiming that some of his guys missed some shots that they should have made.”

Auburn’s 109 points are the most scored in an SEC road game in program history, an accomplishment that Pearl’s young squad will likely take pride in and build upon in the remainder of their 2021 campaign.

The Tigers will be back in action on Tuesday, Jan. 26 when they play host to the No. 19 Missouri Tigers inside Auburn Arena on ESPN2. Tipoff of the contest is set for 8:00 p.m. CT.