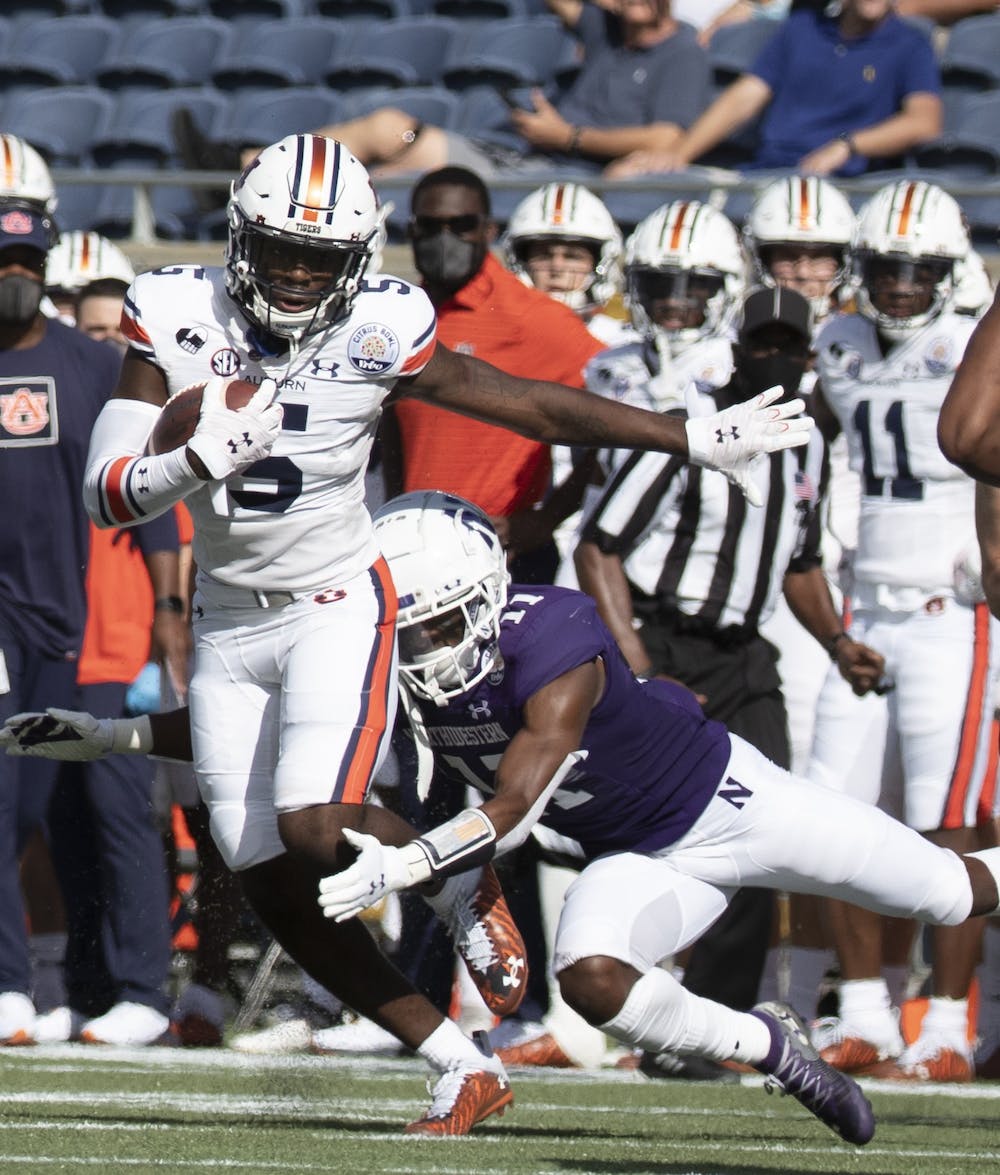 ORLANDO, Fla. To say that Auburn’s trip to Orlando did not go as interim head coach Kevin Steele had planned would likely be an understatement. The Tigers venture into the Citrus Bowl ended with a (35-19) defeat at the hands of the Northwestern Wildcats.

With a skeleton roster missing the likes of Tank Bigsby and Brodarious Hamm, Chad Morris’ offense struggled for the majority of the game, with a trio of three-and-outs in the first quarter alone and was unable to produce any form of consistent production, particularly in the run game.

Steele says that — regardless of who is in and who’s out — the team will not make excuses on the basis of personnel.

The Auburn backfield combined for just 48 yards rushing in the first half of the contest.

Having found little success in the run game, the orange and blue looked to the arm of sophomore quarterback Bo Nix. The second-year starter proved to be the only glimmer of success, completing 14 passes on 25 attempts, racking up 118 yards through the air and setting his team up for a pair of field goals.

Defensively, the orange and blue struggled in the early going, giving up two early touchdowns to the Cats and allowing quarterback Peyton Ramsey and company to seemingly move the ball at will; the Auburn acting head coach admitted his squad suffered from an inability to find a rhythm.

“We came out in this game and struggled a little bit in the first half offensively,” Steele said.” Defensively we were out of sync.”

The squad eventually settled in and held the purple to just 14 in the first half. Auburn entered the locker room trailing 14-6.

For the orange and blue, the second half was much less fruitful than the first, if there were ever such a thing. Despite an early third quarter touchdown and two defensive stops, Steele’s team had seemingly no answer for the Northwestern attack.

“We were not pleased with that as a group, as a defense,” Steele said. “But Northwestern is a very, very good football team in terms of their play and they are mistake-free in a lot of ways.”

By the fourth quarter, Auburn had all but abandoned the run game and had placed all of its eggs in Nix’s basket. The sophomore completed 11 of 17 passing attempts for an additional 186 yards and tallied a lone touchdown after returning from an apparent leg injury; however, his efforts were not enough to mount any form of comeback.

Northwestern posted an additional three touchdowns in the final 30 minutes against a Tiger defense best described by their head coach as emotionally depleted.

“Played really good on third down and then the offense got a little bit of movement there and we had I think a fourth down, on the fourth down stop, we didn't go back out there with the correct energy and focus, and they drove the ball methodically down the field and changed the stat sheet drastically in the run game,” Steele said.

Auburn now finds itself with a final record of 6-5 in 2020-21 and in the midst of uncertainty around the program. With a new head coach and certain changes imminent, the coming days will likely prove crucial in piecing together what fans should expect in the spring scrimmage and the 2021-22 season.

Details regarding the annual A-Day intersquad scrimmage have yet to be released. Eagle Eye TV will provide continual coverage of the team’s off-season.