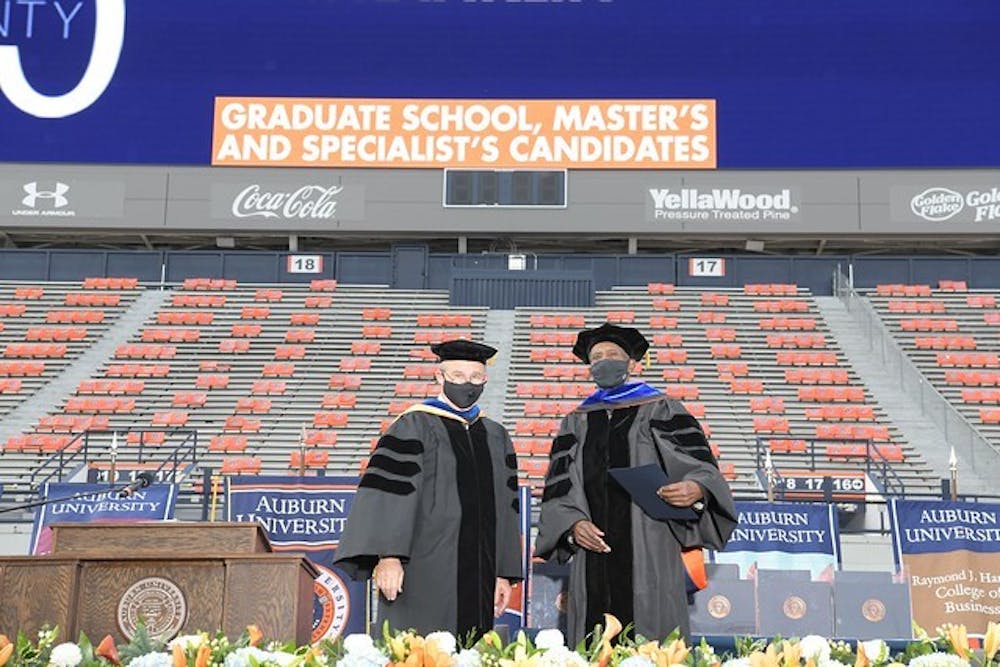 Auburn, Ala (EETV) -- 88-year-old trailblazer, Harold Franklin, received a copy of the Auburn Creed as he walked across the stage at Auburn University’s fall commencement ceremony last Sunday morning. Franklin does this 56 years after his integration of Auburn as the university’s first African American student. Auburn University honored Harold Franklin as its first African American student back in 2001 with an honorary doctorate of arts and then by erecting a historic marker by the Ralph Brown Draughon Library in 2015. The 1962 Alabama State College honors graduate that went on to serve in the U.S. Air Force defended his thesis in February but was unable to partake in the spring commencement ceremonies that were postponed due to COVID-19.

Following his departure from Auburn in 1965, Harold Franklin earned a master’s degree in international studies from the University of Denver and taught history at Alabama State University, North Carolina A&T State University, Tuskegee Institute and Talladega College until his retirement in 1992.

“I’m just about speechless after all these years,” said Franklin. “I realized it wasn’t going to be easy when I came here as the first African American to attend Auburn, but I didn’t think it would take this long. It feels pretty good.

“I’m overwhelmed, and it was an honor to be hooded by Dr. Franklin,” said Williams, leader of the nonprofit Ridge Macon County Archeology Project. “I would describe it as the cherry on top of the wonderful experience I’ve had in my program. I didn’t know when I enrolled that was the case [of being the first], but I’m just excited and very, very happy about it.”

And, in a day of honoring trailblazers, Auburn’s first group of EAGLES—students with intellectual disabilities—graduates walked the stage on Sunday. Anna Moates, Josh Greiner and Bradley Basden finished Auburn’s program and also became the first graduates of a Comprehensive Transition Program in the state of Alabama.

“The EAGLES program staff sends our heartfelt congratulations to all 2020 graduates from Auburn University, but especially to our basic program completers, Anna, Josh and Bradley,” EAGLES Program Director Betty Patten said. “While many things have looked very different this year for everyone, this graduation ceremony looks different for the better! As the first cohort to successfully complete the program, we honor our trailblazers and celebrate inclusion at Auburn. "

Harold Franklin gave the graduates these departing words: “Do your best and be honest. Treat everybody with respect, and if they don’t treat you with respect, don’t associate with them. That’s what I’ve tried to do all my life.”