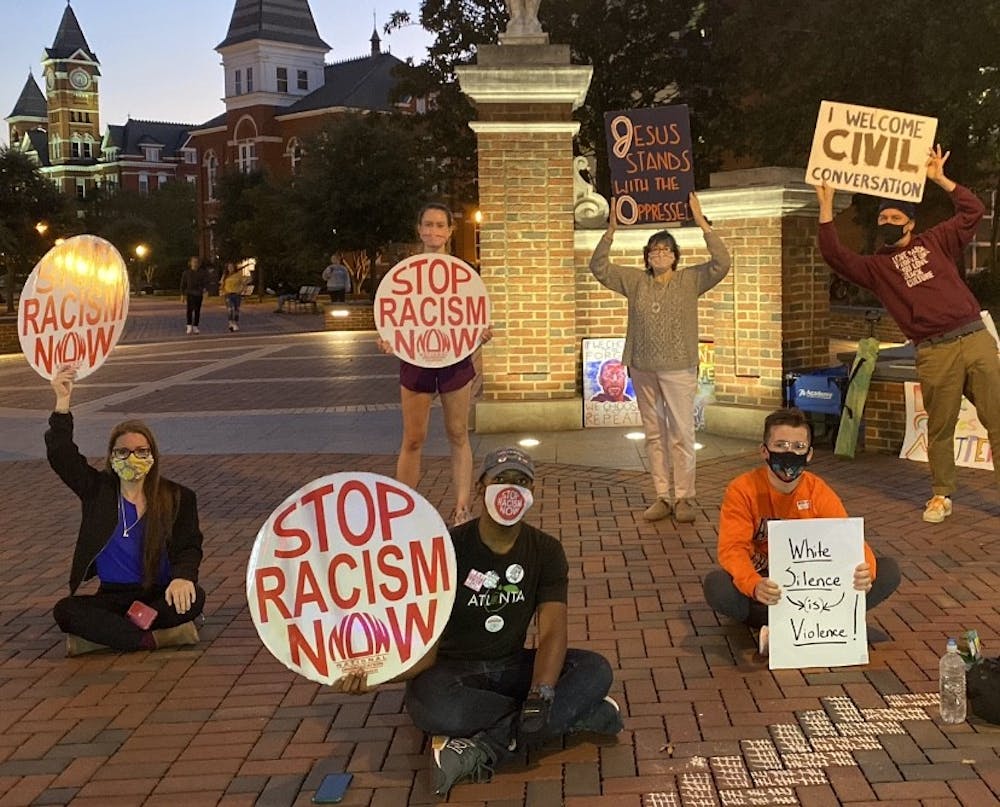 AUBURN, Ala. (EETV) - When Auburn University research professor Kelly Thompson, began a solo sit-in near downtown Toomer’s Corners. She had no idea that it would turn into a daily routine for the next five months.

Thompson wanted to protest near the busiest intersections in the city. The protesters in the Auburn-Opelika who were outraged by the killing of George Floyd in Minneapolis.

“It was the day after really big protest that had happen down here in this town and I was very moved by the presents of everyone showing up the day before and there was something about it that I knew I didn’t want it to stop,” Thompson said.

Auburn University alumni, Damarius Nolan-Watts, joined Thompson and brought along signs. Another woman from a neighboring county accompanied the two.

Thompson be-friended the protesters, and more people joined in a matter of weeks. Thompson said this prompted her to name the group “Toomer’s Sit-In.”

The group conducts a daily protest from 5 p.m. - 7 p.m. Thompson said the group will continue to protest and does not have any plans to stop anytime soon.

The sit-in has captured the attention of several in the city. Thompson said she enjoys developing relationships with new protesters and like-minded individuals.

Local artist, Bay Kelley, says the group offers him support during times of high racial tension. He says the group established lifelong friendships for him.

“We not only have developed a really familiar relationship with each that requires very little effort, just sort of a common cause. But then we’ve also developed this whole neighborhood corner kind of vibe and I love it,” Kelley said.

The controversial racial climate that began months earlier lead Auburn University student Taylor Gusler to join the movement. He said he wanted to view matters from a different perspective.

“The thing that inspired me to come out here was the awakening I had over the summer. People explained to me why systemic racism is very real and how it affects our communities,” Gusler said.

Gusler says he wants to be a lawyer and establish a change in marginalized communities. He says he has learned valuable lessons during the protesters.

Thompson says as nightfall sets, the hunks from supporters and visitor encourages the group.

“Hearing the car horns beep every day is refreshing to us, and it lets us know that we are doing something right out here. It gives us that boost we need to continue to spread the word,” Thompson said.

Despite the positive impact on the community, Thomas says that the movement has faced backlash. She says a frequent protester was nearly hit by a truck by someone with an opposing view.

Thompson says there are supporters from the community who has offered them a series of support. She says she cherishes the gifts from strangers and enjoys the refreshments given to them during trying days.

Thompson says the random acts of kindness reassures her that there are people who agree with the protest's purpose.

“Even in a small town like this space with the dark tragic history that we have in the deep south, even here we have overwhelming support for this movement,” Thompson said.

Thompson says it is a tradition to keep track of the number of days the group protest. She says she collects the data of positive and negative feedback from members of the community.

Thompson says she tries her best to maintain a positive outlook on the future. She says she wants to live in a world where all races and generations can unite as one.

Thompson says despite the negative comments people, the group does not take attacks personally. She says she remains optimistic and focuses on the positive aspects of the protest.

“We’ve been called terrorists, we’ve been called unamerican, we’ve had a lot of birds tossed our way, but we just let it roll off our back because they are humming down at the bottom. The negatives, they never really have too much of an impact. It's the positive stuff that we carry with us,” Thomas said.